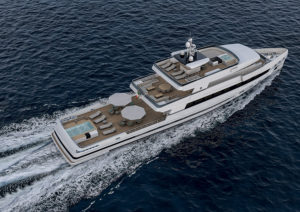 Rosetti Superyachts, a subsidiary of Rosetti Marino Group, unveiled it is working on a Remote Control System to transfer autonomous navigation technology to the superyacht industry.

Working in close collaboration with the group’s research and development team, Rosetti Superyachts is introducing a remote-control system based on a machine-to-machine (M2M) system, which takes a step towards autonomous navigation in the superyacht market.

Autonomous navigation is being the protagonist of a revolution in the transport industry, with driverless cars being constantly perfected. The advent of autonomous navigation in the superyacht industry may be closer than ever, as Rosetti Superyachts speculates that “some commercial unmanned vessels may be at sea before the end of the decade and the logical conclusion is that superyachts will follow.”

The new Remote-Control System is installed aboard a Lloyds Register-certified tugboat named Giano. Presented at the 2018 ITS Tugnology convention in Marseille – June 25th to 29th – and demonstrated by Svitzer Group Marine Manager Captain Carsten Nygaardm, this innovative technology enables the vessel to be manoeuvred from a remote console, using the same controls found on the bridge of the subject vessel.

Two internet encrypted tunnels ensure cybersecurity with a direct connection between the ship and the remote bridge, so that, without the need to go through third-party servers, the tugboat can be safely controlled with full access to the video system, the navigation, propulsion and engine room equipment.

Rosetti Superyachts claimed that “a yacht could also be manoeuvred without geographical limits by a senior officer located in a land-based office.” Here, the commands would be relayed to the land-based console by the captain on board the vessel; a route would then be entered and the vessel would then be delivered to its final destination. All of this is monitored by a video system and night-vision cameras, assuring double control during navigation to avoid collisions.

The yard called on the International Maritime Organisation to update regulation to enable remote control technology to be transferred to yachting. “Maritime law is one of the oldest legal systems in the world that has successfully adapted from sail to steam and beyond. No doubt the same will hold true for autonomous remote-controlled vessels in the near future,” the yard stated.

In anticipation of autonomous vessels entering service, Lloyds Register has already published classification guidelines ranging from AL 1, which refers to ‘On-board Decision Support’, whereby all actions are taken by the human operator, but decision support tools can present alternative options, such as routes to the crew, to AL 6, which is fully autonomous with unsupervised operation.