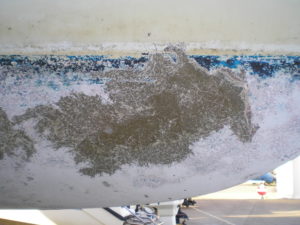 Once again yachting shows it’s an all-round economic resource for the country. Through a project developed by UCINA-Confindustria Nautica called End of Life Boat it is possible to find a solution to the problem of demolishing and disposing of boats that have reached the end of their life, encouraging research and creating new jobs.

The production cycle in the industrial field will in the future have to take increasingly into account eco-sustainable building techniques that can lead to processes for the recovery and reuse of raw materials and semifinished parts, in addition to finished products.

The project, named ELB /End of Life Boat, was presented at Ecomondo, the fair dedicated to recycling, held in Rimini at the beginning of November.
Aims of the project
What started the project was the increasing interest in the matter of the cost of disposing of complex refuse (professional electronic apparatus, cars, boats etc.) which represent an open-air mine for metals and materials that are still useful but whose potential is not adequately exploited. The project is not lacking in scientific dignity and industrial concreteness: it stands from the collaboration between UCINA and the Department of Chemical Sciences and Materials Technology of CNR and takes concrete form in the practical application of the innovative technique of up cycling of FRP (Fiber Reinforced Plastic) developed at IPCB/CNR (formerly ICTP) in Pozzuoli.
The phases of breaking up
The first phase in breaking up the boat consists in dismantling the various components (engines, systems, furnishings etc.) and then in the separation of the various elements such as wood, glass and metal from the fibreglass, a material that cannot be recovered and reconverted into its initial state. The fibreglass is then ground and combined with polystyrene type polymers to produce an inert techno composite that can be used both in granules to produce moulds (for example computer casings) or in sheets to make furnishing accessories (for example luxury kitchen tops, new material for flooring, furnishing objects”. The material is thus reinserted in the production cycle without being destined for disposal or pyrolysis processes (energy production). The new compound is a thermoplastic material and so at the end of its new life-cycle it can once more be recycled.

The man who started and developed with determination the ELB project within UCINA-Confindustria Nautica and outside the Association was the architect Antimo di Martino, for many years a council member of UCINA and currently delegate for environmental matters and sustainability. We asked him to describe some details of the project.

When did “end of life boats” start?
The real turning point for ELB came when my “environmentalist” mania led me to meet, during one of my researches to improve the SGA of Fiart Mare in accordance with ISO 14001, something I’m still responsible for, Mario Malinconico of the ICTP/CNR. He told me about a new technology for recuperating plastic refuse such as fibreglass and polystyrene: recovery of the material, not of energy. I can say that from that discovery of the existence of that technology ELB effectively started. It was 2008; before the edition of Nauticsud I introduced Dr Malinconico to the new president Albertoni to show him the samples obtained with the compound, the techno polymer produced from plastic refuse.
Then, in 2009, we signed together with CNR a specific convention (SATEC, Venice), and in 2010 presented the feasibility study (Seatec 2010) and the definitive project.

ELB is supported by experiences from Europe or other countries?
Absolutely not, though some operational practices, already designed and experimented with in Sweden and France, influenced us. From the Swedish experience we took the idea of developing an insurance system to finance the managing of the logistics and dismantling of boats at the end of their lives; and partly, from the French APER, the need to create a reference network.

A brief reflection on the economic and social advantages of the project
The basic objective of ELB is to respect environmental, economic and social sustainability.
We believe that ELB is a typical example of green economy and is a concrete expression of a circular economic system. This is where the most modern economic systems are going, they take into account the entire life-cycle of the product, from its creation to the end of its life-cycle, its reuse or transformation and all the secondary systems involved. A new product should meet the requirements of maximum efficiency, but also respect and foresee all the implications, even those that are not evident at first sight. It is in fact a substantial cultural change: passing from “use and dispose of” to “use, reuse, recuperate”. It’s not a small step. But what is certain is that if this change doesn’t come about quickly there will be increasingly negative consequences.

What are the next steps in making the project a concrete initiative?
We have already obtained to concrete results. Two technical regulations: UNI 11509 of 2013 on the end of life-cycle treatment of ships and small boats and equipment (moulds) and the revision of regulation 10067-13 of 2013 on plastics that can be used as secondary raw material (fibreglass is now one of these).

Where can the initiative be sited geographically?
The ELB project is a systemic one, it’s not an industrial project. It will be a system that coordinates and gives guidance. We have evaluated various aspects that we think will influence the success of the system. Generally we can say that the basic unit consists of three kinds of plant that represent a functional grouping. These are a stripping down plant (on land or water), a plant for making EPS soluble (close to commercial centres), and a plant for making the compound. We believe that in a first analysis three units can be built in the North, two in the centre and two in the south.