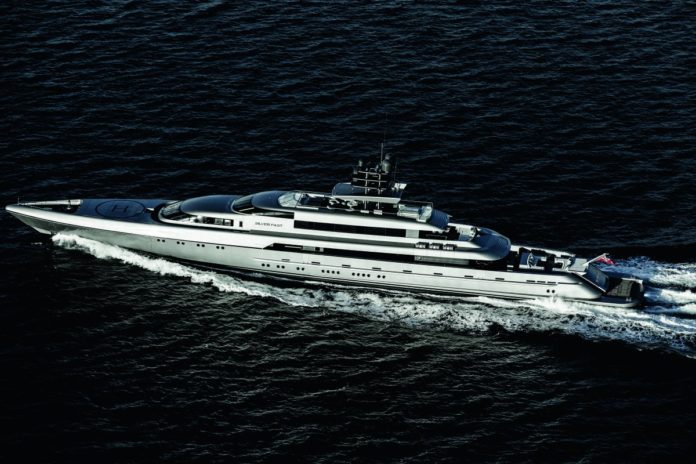 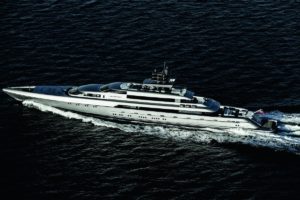 From Australia, where the builder shipyard Silver Yachts is based, the Silver Fast yacht travelled to Europe with just one fuel stop: a journey of almost ten thousand nautical miles, a feat near-unprecedented for such a large yacht.
Designed by Espen Øino, the Silver Fast is the fourth in a series of boats that focus on incorporating power, long range and fuel efficiency into one package.
With her record-breaking performance, she proves to be the fastest long range cruising yacht – 4,500 nautical miles at 18 knots and 6,200 nautical miles at 14 knots with an already proven capability to effortlessly complete long passages in every sea state. In good conditions, Silver Fast can cruise at around 20 knots and has a maximum speed of 27 knots, which makes it also the fastest yacht of its kind: entirely aluminium-built, the vessel weights only 952 tons despite her big dimensions. A night-time mode that slows the speed down to 18 knots and allows a quiet and vibration-free ride is made possible by quantum zero-speed stabilisers -that also keep the yacht still at anchor. Long overnight passages can be fully fuel-efficient and silent, with low noise levels around 40/45 decibels.
Silver Fast has nine guest cabins (a master suite, five doubles and three twins with two additional smaller berths). The master cabin (pictured) is located on the top deck, while the remaining eight (of which five are double and three are twin) are located on the lower levels. The yacht can thus accommodate up to 18 guests, housing also a crew of 18 and boasting a seating area for up to 20 more, which makes it ideal for entertaining off the coast. Facilities on board include a sea level beach club with a gym, spa, a eight-person Jacuzzi, a bar – all of which accompanied by trained staff – a sun deck with an outdoor cinema, and a 70,000 watt sound system. The interior resembles a mansion with multiple seating areas, kitchens and TVs abound: all of the decor was chosen by Andreas Holnburger to look fresh and luxurious. The interior styling is complemented by a range of modern furnishings and art, creating welcoming and yet contemporary spaces.
Thanks to her relatively short draft height of three meters, the vessel is able to pass through shallow waters. The yacht cannot approach much to shore, due to her dimensions, thus a tender stowage area accessible via gullwing doors and a helipad were added.
Eco-friendliness in mind, the design provided all the luxuries of a vessel of her cost (over €80 million) and measures (77 meters long).The Silver Fast is among the most luxurious and expensive boats on the market, but also one which best takes into account the health of the environment.