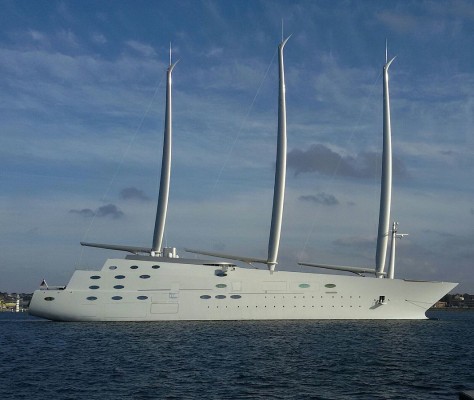 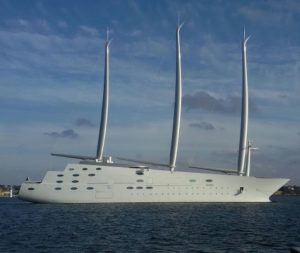 The Sailing Yacht A (previously known as White Pearl) made her debut in a series of sea trials in Germany, where she is currently being built.
Built in Nobiskrug in Germany, the design work, rig and keel were done by Dutch-based Dykstra Naval Architects, with the masts constructed by British firm Magma Structures and the sails by Doyle Sails in the United States.
The yacht has been commissioned by Andrey Melnichenko, one of Russia’s 10 richest people, who also owns Motor Yacht A, one of the largest and most expensive motoryachts in the world.
Measuring 143 metres with a beam of 25 metres, Sailing Yacht A will be the world’s largest sailing yacht. Three composite carbon fibre masts, towering up to 100 metres above the water level with a crow’s nest at 60 meters, are reportedly the largest and most technologically advanced free-standing masts in the world. Her total sail area will be more than 3,700 sqm.
The vessel will have 8 decks connected by several elevators, accommodating 20 guests and a crew of 54.
Like the Motor Yacht A, the Sailing Yacht A is designed by Philippe Starck, and some of her design features are similar to the current A. Among the innovations on board is an enormous curved glass hull so guests can view the ocean below, which has been tested at depths of up to 120 meters to ensure it can withstand the necessary water pressure.
There is helicopter landing pad on the sixth floor and the whole system for the boat is operated from the bridge on the floor above. Sailing yacht A will also carry a submarine.
She will be powered by a hybrid diesel-electric package with controllable pitch propellers. A will reach a top speed of 21 knots, with a cruise speed at 16 knots, reaching a range of 5,320 nautical miles.
About the project, a spokesman for Andrey Melnichenko commented “The project was a considerable financial risk for him as he had to fund massive research and development to see if he could achieve his vision. But he is a man to always push the boundaries and to challenge the industries he works with to think out of the box so he can achieve something new and exciting as well as beautiful. Sailing Yacht A is a monument to invention.”
Sailing Yacht A is scheduled for delivery in 2016.