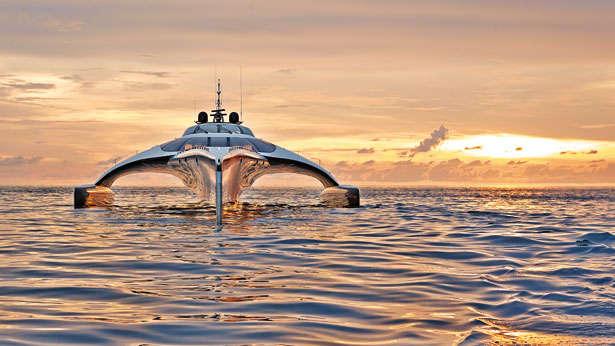 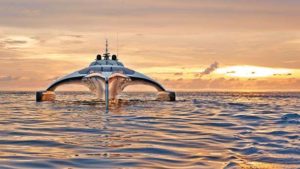 Adastra was unveiled in Hong Kong in April 2012 and took three years to build, after two years of planning and design.
The vessel is a 42.5m three-hulled yacht designed by UK yacht designer John Shuttleworth, with interiors by Danish designer Inge Strompf-Jepsen and built by McConaghy Boats for a British owner living in Hong Kong.

The experienced owner’s requirements
Anto Marden, the owner, has been in the shipping business for years and already owned a 13.7m trimaran by the same designer: as such an experienced client would do, he set a series of requirements for his new vessel.
Marden wanted a larger yacht with a global range faster than a sailing boat. Four key requirements were offshore seaworthiness, comfort, economy of operation and shallow draught. This meant, in particular, a vessel as light and easily driven as possible, with good load-carrying capacity for luxurious accommodations, outriggers continually immersed for better stability, higher crossbeam above the water to reduce impact and noise caused by slamming.

Innovative shape and hull design
The shape has been specially developed to cut through waves as it glides across the high seas.
Both aerodynamics and hydrodynamics were carefully considered, and the exterior lines were smoothed to reduce friction from water passing over the structure. The vessel’s skin also forms part of the torsional strength, according to Shuttleworth’s concept of ‘integrated structure’ formulated in the Eighties. This results into a lighter, stiffer, stronger and less likely to twist boat than any previous multihull designs.

Hull materials for incredible weight savings
The yacht’s deck and superstructure are of carbon fibre, while the hull is an e-glass/Kevlar foam sandwich. All the structures were resin infused to ensure high quality and reduce weight. The most dramatic weight savings, came from changing the upper structure’s material from foam/e-glass to carbon/Nomex. The result is that Adastra displaced operates with light ship displacement of 52 tonnes.

Layout and Scandinavian interior with Asian influences
The saloon offers superb views thanks to its large wraparound windows. A large foredeck sunbed is accessible from the saloon. The main helm station, with two seats on a plinth giving a view over the cabin top, is in a raised pilothouse between the saloon and the aft deck. To minimise the helm station’s intrusion on the saloon, it is housed in a wineglass-shaped structure. Behind the helm station, the cockpit is furnished with an undulating sofa and a dining table tucked within the structure of the main hull, the supports for the pilothouse and the rigid bimini top. This aft deck can be enclosed with a set of sliding side covers.
Accommodation on this superyacht is for nine guests and six crew. The master cabin is aft in a section of the main hull that flares above the waterline, while guest cabins are forward of the engine room. Further forward are the crew cabins and galley.
The open deck running aft provides stowage for a 4.8m tender, a second 3m tender is in the garage below the aft deck, whose door hinges out to create a bathing platform.
The Danish designer, operating an architectural design company in Hong Kong, mixed Scandinavian style with Asian influences. Interior materials are limited to light honey oak and semi-gloss white paint with occasional brushed stainless-steel trim. The soft contrast of the surfaces is augmented by white woven fabrics and blue-and-white ikat fabrics collected by Elaine Marden in Indonesia.

Fast and global range performances
The low weight, easily driven exterior, resulted in one of the most fuel-efficient superyachts. Her big fuel tank coupled with her dynamic sailing efficiency allows the Adastra to travel up to 4000 miles without refuelling – the same distance from London to New York. At light load, the yacht burns 4.5 gallons of fuel an hour to cruise at 10.5 knots, which gives her a range of 10,000 nautical miles. At 17 knots she uses 98 litres an hour and has a range of 4,000 nautical miles. Her top speed, delivered by one 1,150hp Caterpillar C18 engine, is of 23.2 knots.

An award winning innovation in the superyacht market
This creative luxury trimaran design was the first of her kind, successfully anticipating problems and finding practical solutions. Adastra was awarded the Most Innovative Yacht prize at the 2013 World Superyacht Awards, and won an award for naval architecture and a judges’ commendation for exterior styling at the ShowBoats Design Awards.