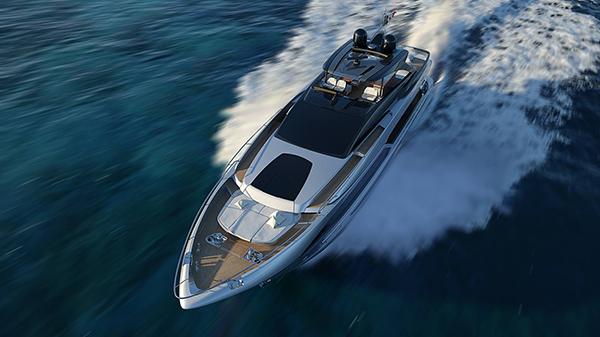 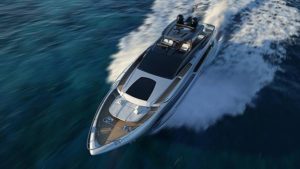 The Ferretti Group held a press conference at the latest edition of Boot Düsseldorf where it released more details of its forthcoming Riva 90 flybridge yacht.

Officina Italiana Design, the Ferretti Group’s Product Strategy Committee, and the Group’s Engineering Department have been collaborating to design and develop this 27.43-metre motor yacht.

The new yacht combines and enhances all the most significant qualities of her predecessors. Among these, her stunning exterior styling, featuring a sleek and dynamic profile and the generous use of glass for the carbon-fibre-framed windows, from the stern to the wide-body owner’s suite on the main deck and on the raised pilothouse. Such features have been inherited by the successful Riva 100 Corsaro and Riva 110 Dolcevita.

The stern area features the innovative Ferretti Group’s patented concealed stairway system, already installed on the new 56’ Rivale. The garage can accommodate a Williams 395 tender and a personal watercraft, which can be launched independently. A wide range of layouts will likely be offered, with the option to fit up to five guest cabins onto the lower deck.

Mauro Micheli, chief designer at Officina Italiana Design, said: “The Riva 90 is a very sleek, slender boat despite being quite large, volume-wise. Its lines are balanced, sporty and elegant, brilliantly epitomising the Riva DNA. There is a real sense of stylistic coherency between the interiors and exteriors.”

Sergio Beretta, CEO of Officina Italiana Design, added: “It is not designed for any specific sea — it’s perfect anywhere. That said, we believe that the Riva 90 will be particularly popular in the East because of its modern, edgy style.”

The Riva 90 will be equipped with underway and zero-speed stabilising fins as standard and, upon request, can also include Seakeeper gyro stabilisers.

Other superyacht projects currently in development at the Italian yard include the Riva 50M, which is expected for launch in 2019.