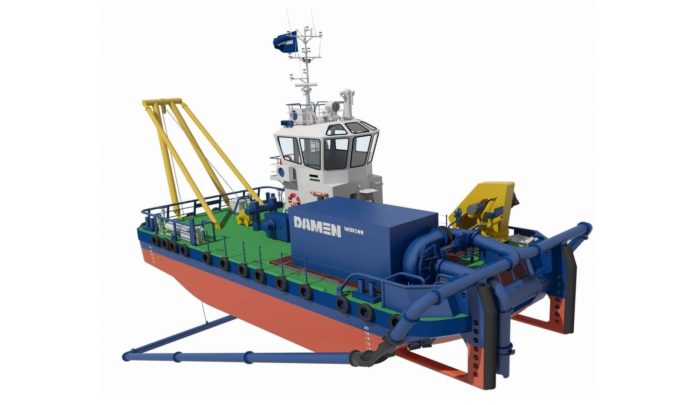 Damen Shipyards Group has recently unveiled a Water Injection Dredger (WID), courtesy of a plug & play system aboard a Damen MultiCat. Such capabilities are typically found only on dedicated platforms, though Damen realised that the Multi Cat’s forward propulsion and manoeuvrability made it a suitable platform for this type of dredging.

“Damen invented the MultiCat as the ideal dredge support vessel – what I like to think of as floating workbench – for Cutter Suction Dredgers (CSD). This is a logical step forward for a platform that has dredging in its DNA,” stated Damen Product Director Dredging Olivier Marcus.

The MultiCat is typically used to assist CSDs on dredging projects, carrying out tasks such as anchor shifting and cutter teeth replacement. Damen realised that, with the addition of dredging components, the MultiCat might actually be able to take on dredging functionality in a manner that proves the rule ‘the whole is greater than the sum of its parts’. In the words of Mr Marcus: “This is not just the equipment, this is one plus one equals three.”

This is not the first time the MultiCat has demonstrated such versatility. In the past, Damen has already fitted DOP pumps or a plough on the stern A-frame to carry out sand mining and maintenance dredging activities. The MultiCat WID dredger will take a different approach. By injecting the silt with high volume, but low-pressure water, the accumulated soil will become a density flow and by utilising the current and/ or gradient the silt will be removed from ports and waterways including rivers and channels, offering a cost-effective, sustainable approach to dredging.

Mr Marcus explains: “After foundations are installed, the modular WID system can be attached or removed without drydocking. What’s more, as the system can also be applied to a modular MultiCat, the WID can be easily transported anywhere in the world – even inaccessible, out of the way locations.”

The MultiCat WID Dredger will be fitted with a Damen Dredge Pump – a wear resistant piece of equipment that is built to just keep going in the toughest of working environments. Its mechanical seal guarantees minimal maintenance requirements.

“We have previously customised tugs, fitting them with water injection capabilities in order to carry out port maintenance capabilities. This type of dredging represents an effective solution that, for just a small investment, delivers really significant additional benefits to a platform already well-suited to a diverse range of tasks,” Mr Marcus concluded.