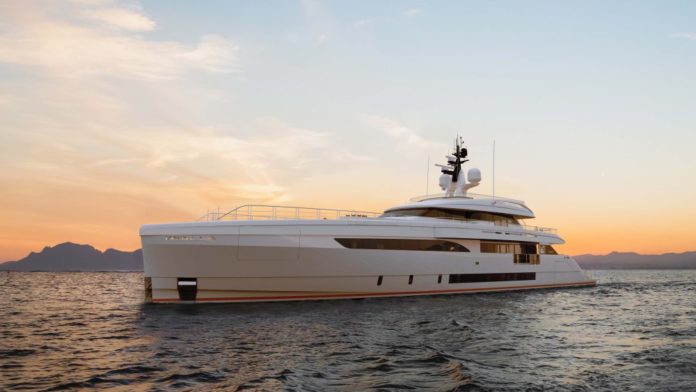 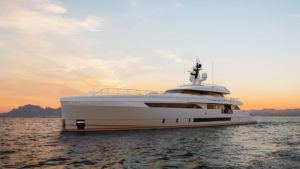 The new 50-metre Wider 165, also known as Project Cecilia, has been launched on May 14th in Ancona, in a private event attended by shipyard staff, suppliers and collaborators.

The Wider 165 comes as a supersized evolution of the successful previous model Wider 150, which featured an unusual and innovative interior design, combined with its diesel-electric and battery-bank propulsion system.

The elegant superyacht, entirely built in aluminium and weighing just under 500GT, features a sleek profile designed by the Wider in-house design team in collaboration with Fulvio De Simoni. The yacht has been conceived to be able to accommodate the adventurous owner’s long wish list of toys.

The interior layout, designed by IdeaeItalia in conjunction with the owner’s architect, is packed with more stand-out features including a generous study with terrace on the port side, private gym with terrace on the starboard side, a sauna room as well as a spacious and light owner’s cabin and en-suite bathroom.

On the foredeck, the helicopter-landing pad, unique to the Wider 165, and circular seating areas set into the superstructure, forward of a large Jacuzzi tub, offers a versatile space that will double as a generous dance floor for fun evenings afloat.

The stand-out feature across the Wider range is the inclusion of a generous Beach Club: Wider 165 has taken this even further to include an extra space for a sauna as well as Wider 32 that we have seen on Wider 150.

The entire layout and decor of the vessel has been studied in minute detail to satisfy and exceed the owner’s requirements but also clearly reflects the shipyard’s desire to offer customized projects on standard platforms.

The yacht’s diesel-electric propulsion system has been combined with a Lithium polymer battery bank and Azimuthal pods that deliver significantly lower fuel consumption. In Zero Emissions Mode (ZEM), running on battery power at five knots is like being in a sailboat with the engines off, surrounded only by the sounds of wind and water. The smaller configuration of the Power Generator Room, which replaced the traditional engine room, gave Wider designers much more interior space for staterooms. The advanced technology also translates into a transatlantic range of 3,100 nautical miles at 12.5 knots, while the range increases to 5,400 nautical miles at 10 knots.

In the coming weeks, Wider team will work closely with the technical staff of our suppliers to ensure that every aspect of Cecilia meets the same level of excellence that we have achieved so far.

Wider 165, Project Cecilia, is available for sale and will be ready for delivery this summer.