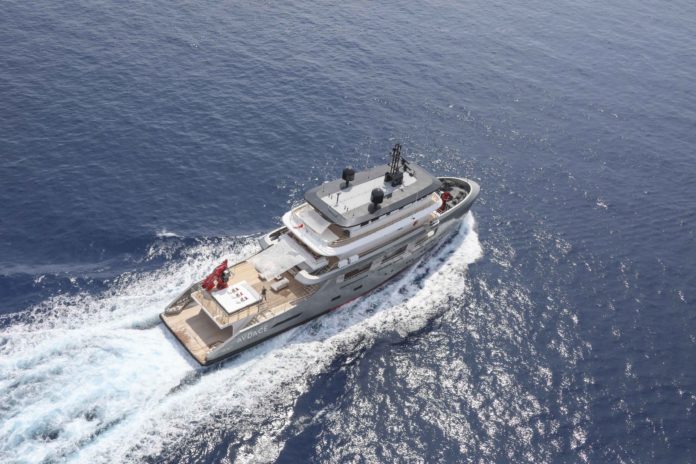 An unconventional superyacht, part explorer vessel and part party vessel. Her owner had her tailor-made in every detail. A big challenge for Floating Life, which conceived and designed her and followed her build as project manager and owner’s representative in the Cantiere delle Marche

She was launched in January and officially presented at the Monaco Boat Show. Audace (“audacious”) is 42.8 m overall and 9.4 in the beam. She is the first explorer vessel in the Floating Life K series and was built by Cantieri delle Marche to a design by Floating Life and Studio Sculli, engineering by Sergio Cutolo/Hydro Tec.

She is a solid, seaworthy and functional yacht where customisation was the name of the game. Her owner, Andrea Merloni, former president of Indesit and an expert seaman, former owner of a large vessel, set out with very clear ideas and had the yacht built to his requirements: to live a long time on board (of the first 170 days of the yacht’s life the owner was on board for 150), to sail all the seas of the world and have plenty of room for parties and events. And, as says Andrea Pezzini, Ceo of Floating Life, “Audace is still work in progress, for us customisation doesn’t just mean building the yacht but handling and following the customer until he says “okay, the yacht’s finished.” Now the owner has used her and tried her out for several months and has decided on changes to be made this winter. For us he is an excellent customer because he always raises the bar and we follow him. That’s our job.”

The key features of Audace are the deck 15 m high dedicated to the owner; more than 150 m² of exterior on the main deck; a hoist at the bow and one at the stern respectively of 2.5 and 4.6 tonnes.

This displacement yacht has five decks with a hull in steel and superstructure in aluminium; with regard to Audace’s build, her welding was upgraded to reduce the amount of filler used on the hull by up to 80%. This has been Rina approved and is also eco-friendly as filler is not recyclable. She has to 1081 kW Caterpillar engines and a range of 5000 miles at a speed of 10 kn; her top speed is 15 kn.

The owner found in the K series the ideal platform for his yacht: apart from the possibility of having a 15 m high penthouse accessible only by a ladder from the upper deck, for complete privacy, including night and living area, small galley and external jacuzzi, on board he also wanted two areas to equip as discotheques (one highly soundproofed and the second in a semi-open area) and right forward space for housing water scooters, a jeep, a motorbike and a tender. Audace has remarkable social areas, about half of the main deck is given over to an exterior saloon with dining, sunbathing and lounge areas. The huge stern sunbed hides the sandals of a tender almost 10 m long.

In the interior the style is sober and function has prevailed over decoration. There are four large cabins for guests, two on the main deck and two with fold-down balconies on the lower deck. Also on the lower deck are four cabins for the crew and an oversized professional kitchen. On the bottom deck, forward of the technical area is a large cold room for food and wine. The upper deck is walkaround and has a saloon, bar corner and of wheelhouse with the captain’s cabin.