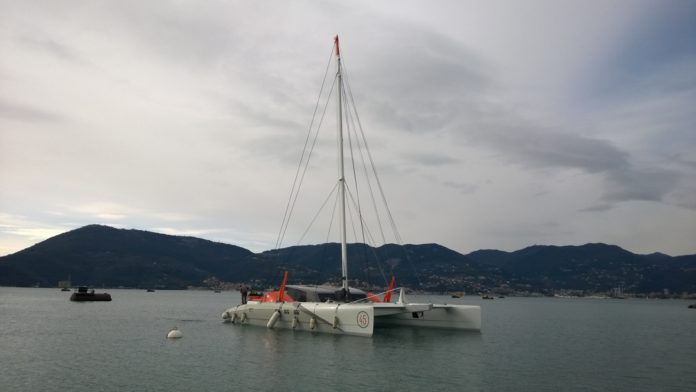 Big racing catamarans seem to lend themselves particularly well to a second life, often thanks to intensive refitting. We spoke about this in Nautech number 03, when the historic 31 m catamaran Enza New Zealand, holder of the round the world record under sail, became an experimental platform for hydrogen propulsion.

X Factor, an English term that only later would be used for the talent show famous all over the world, is the name of a one-off 54 foot catamaran, created for racing and launched in 2004, the thoroughbred racer that won in real time every race it took part in “down under”. The original design was by Tim Clissold, a multihull specialist, with the support of Brett Bakewell-White for the rudder design and Hall Spars which designed and built the mast. The boat was built in New Zealand at Multihull Solutions. When her racing life was over, the catamaran arrived via cargo ship from the Pacific and, at the end of almost two years of studies, modification and tuning, a new X-Factor was born. A boat with the DNA of a racer but converted for safe and enjoyable cruising.

The reconversion, entrusted by the speed loving owner to the H3O Yacht Design studio (which by chance is close to the “temple of speed”, the Monza racetrack) it was a major and fascinating challenge for the new design team which transformed the catamaran while maintaining its original spirit and changed. A cruising yacht that could still maintain very high daily mileages in complete safety even in heavy weather. To keep up the level of safety – consider that in up to 30 kn of wind the windward hull doesn’t even lift out of the water – it was decided not to go ahead with modifications to the foils (though these were designed) that could have lifted the catamaran out of the water in certain conditions.

The original structure is remarkable, with a central spar that runs from the stern crossbeam (with an arched shape that carries the curved main track) and beyond the forward crossbeam, made entirely in carbon composite, including the braces of the forward crossbeam and the cleats; the hulls are in fibreglass with carbon reinforcement. The platform is very wide at 10.45 m compared with the length overall, thus providing great form stability that gives power in high winds.

Among the most obvious modifications is the appearance of a large superstructure, a deckhouse, where before there was only the webbing trampoline between the two hulls. This provides a large covered area for the chart table, galley and a large living area with a dining table. The only area where it is necessary to walk on webbing is that the edges of the cockpit, near the stern crossbeam. To carry out these modifications without compromising the spirit of the project, and so avoiding an excessive increase in weight, the H3O team (Andrea Colli, Mario Bonelli and Paolo Portinari) applied considerable weight reduction: from removing the diesel engines and all the internal structures and panelling in fibreglass and very dense core inside the two lateral hulls, which today have been fully revised and become perfectly symmetrical, each with two cabins and a bathroom. All internal fittings were removed and rebuilt entirely using a sophisticated and very light sandwich with external skins in carbon, made in a yard on Lake Garda and fitted at the Cantieri Navali La Spezia.

To make manoeuvres under sail easier the position and inclination of the lateral fins was changed, and the catamaran now tax much better and with no need for a professional crew, which is fundamental on a cruise. The sailplan too was drastically modified, while maintaining the very refined carbon mast. The boom earlier rested on the central crossbeam, while now the gooseneck is in its traditional position on the mast, thus making room for the deckhouse. However the sailplan remains very powerful, with a main a of 107 m², a jib of 47, a Code Zero of 98 and 210 m² gennaker.

One of the characteristics that makes this redesign absolutely unique is that the boat has complete energy autonomy. It has two 10 kW Oceanvolt Sincrony motors that can be powered in three different ways: by a sophisticated set of solar panels on the deckhouse (10 m² – 1.5 kW); by the propellers, which become hydro generators when the boat is under sail (careful studies led to the installation of gearing which means recharging can take place at a boat speed of between 10 and 22 kn). The third power system is quite particular: a latest generation generator weighing just 80 kg fuelled by GPL stored in six specially made carbon canisters (the same gas is used for the stove in the galley) can produce 20 kW of energy making the catamaran perfectly autonomous in electric mode on long trips in the absence of wind.