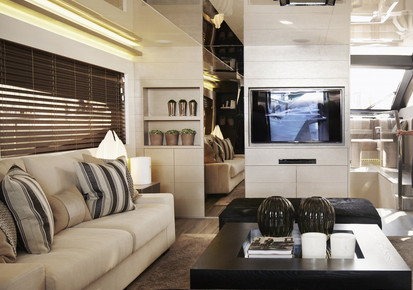 A fruitful partnership between British motoryacht builders Pearl Yachts and Kelly Hoppen, world renowned British designer, has been established in recent years. The collaboration has, until now, seen the launch of two yachts – the Pearl 65 and 75 – with the design of a 95 footer already complete. All are distinct from one-another, featuring the East-meets-West philosophy, sophisticated use of texture and neutral colour scheme that are part of Kelly Hoppen’s design ethos of balance, a well-known trademark.
As an interior designer, alongside residential apartments, luxury resorts, private jets, British Airways first class cabins and more, Hoppen had also already been designing yacht interiors for private clients for many years. It was thus to a designer well-experienced in the field that the Pearl Yachts commissioned a branded yacht, the Pearl 65, where Kelly Hoppen had the opportunity to put her distinctive and vibrant touch on a traditionally dark and masculine line. That was the start of a new and very promising partnership, ‘the Studio Yacht’, as Hoppen likes to call it.
The Pearl 65 was a success and the second one, the Pearl 75,  was no less: it received worldwide acclaim after being named as the best Motor Yacht under 25 metres at 2013 International Yacht & Aviation Awards.
According to Kelly Hoppen, whose career involved several branches of design from interiors to jewellery, designing always presents the same kind of challenges, as design process interests the same part of the brain no matter what the result is supposed to be. With boats, nonetheless, she believes a designer should plan everything with a deeper knowledge of space and a better developed 3d imagination, as space saving and storage are crucially important.
Working for an industry that suffered in the recession, the well-balanced designed played a role in the success of the 65 and 75 Pearl Yachts. The two yachts allow people to buy completely done and dusted boats without spending much, as if going into a fully designed apartment with every facility and accessory already in it.
Now the partnership finished designing a brand new 95 foot yacht for Pearl, and the ‘Studio Yacht’ is about to start designing another superyacht exceeding 50m in length, and an even bigger project to be expected in a year and a half, which promises to be ground-breaking.