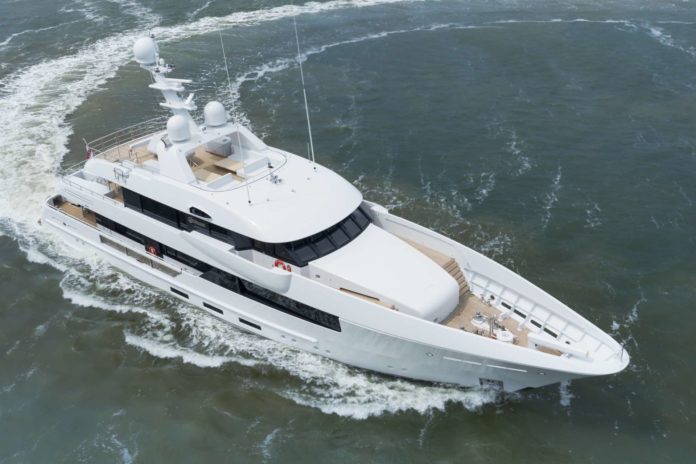 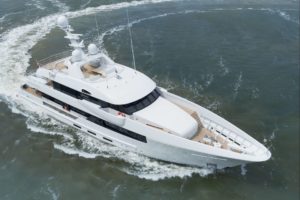 Moon Sand is one of Feadship’s newest yachts launched in April 2015, alongside with the other launches Kiss, Halo and Savannah of the same year. Moon Sand boasts the best offers from the Dutch shipyard featuring naval architecture by De Voogt Design from Feadship and a colorful interior design by Bannenberg & Rowell Design.
Her design was aimed to achieve ideal light in all interior, to maximise spaces and the feeling of spaciousness onboard, and to guarantee the broadest freedom of choice to owners and guests.
As for the light as key concept in the design of Moon Sand, the windows are significantly extended to allow sunlight to flood the cabins. Spaces onboard offer plenty of room for sitting and relaxing: the main deck and bridge deck feature an extensive sitting area, and even the staircase was designed in such a way to give an impressive feeling the space.
Regarding freedom of choice, it is achieved in two ways: the first one being the possibility given to the owner to fully customise his vessel since the first steps in the concept design, and the second, a truly versatile approach to layout and outdoor spaces’ arrangement, which can be easily changed even once the yacht is built and fitted.
An interesting feature best explaining this complete freedom of choice is the large swimming pool on the main deck, which has a floor lowering system that allows owners and guests to vary the depth of the swimming pool. One of the most customised areas on Moon Sand according to Feadship, the swimming pool can be thus set to suit adults, kids and later on disappear and transform itself into a dining area, just by raising the floor completely. This clever feature was made possible by locating the tender on the sun deck instead of placing it in a traditional garage: not needing further room for a tender increased the available space to dedicate to the swimming pool on the main deck. There is a crane on the sun deck to lift and lower the tender into the water.
With an overall length of 44.2 metres, Moon Sand is powered by two Caterpillar C32B engines rated at 896 kW each. They are coupled to two Kohler 150 EFOZD generators rated at 150 kW and 50 Hz each, allowing Moon Sand to reach a cruising speed of 19 knots.