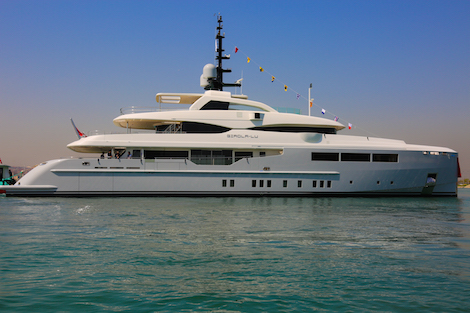 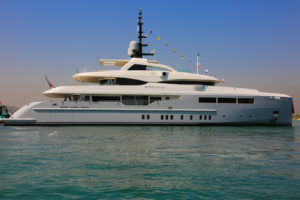 Turkish shipyard Bilgin Yachts has successfully launched its first yacht of 2016. The 46.8m superyacht, named Giaola-Lu is the 23rd yacht built by Bilgin since its entry into the 30m+ superyacht market in 2003.
Minor changes were added by the owner to her interior right before the launch: the result is the expression of a contemporary style with intricate details, designed by London-based studio H2 Yacht Design.
H2 Yacht Design also designed the vessel’s exterior styling, with a strong profile and plumb bow. Three large rectangular windows forward, make for a prominent feature and bring together the square window theme of the light grey hull.
Designed and equipped to RINA Commercial Class Maltese Cross Hull and LY3 regulations, Giaola-Lu will be capable of unrestricted coastal and offshore cruising around Europe, the Mediterranean, Atlantic and the Caribbean. Bilgin also worked closely with Unique for her system design.
Giaola-Lu will be delivered to her Mexican owners in late May following an extensive period of sea trials.