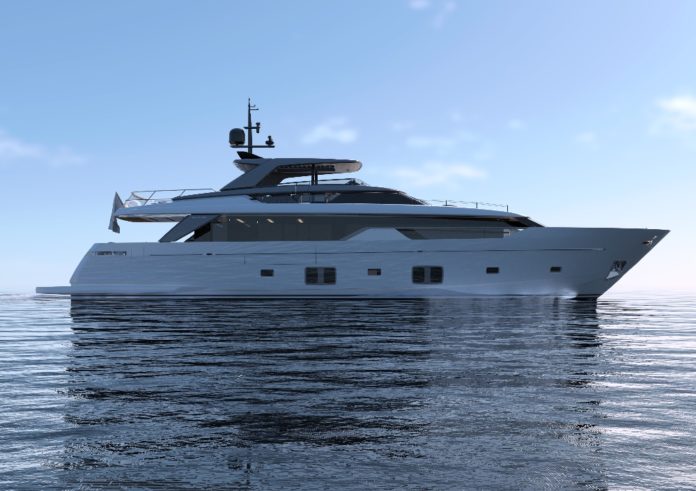 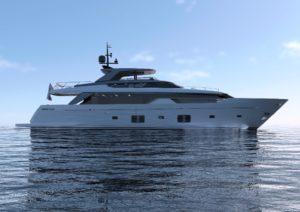 The official unveiling of the Sanlorenzo SL102 asymmetric has recently taken place at the yard’s facilities in La Spezia, one of the largest construction halls for yachts in the Mediterranean area. The event was also the occasion for celebrating the yard’s 60th anniversary.

The project, first conceived in 2012, was presented to employees, journalists and Sanlorenzo owners by CEO, Massimo Perotti. Perotti’s vision was inspired by a collaboration with world-renowned Chris Bangle, BMW design luminary, and later realised by Studio Zuccon International.

The overall design addressed the issue of the increasing demand on guest space at the lower end of the size spectrum, the fashion for full-beam guest spaces, as well as the need for operational efficiency. In Perotti’s terms, “how do you retain a full-beam inside without abandoning the ability of the crew to move forward and backwards for mooring and [safe] operation?”

The solution suggested by Sanlorenzo is to be found in an innovative layout arrangement: a full beam salon and foredeck area port side, with starboard housing a safe operational corridor for crew and/or guest use. The result is floor-to-ceiling windows, “right next to the ocean, with no passage and lots of light and connection to the sea”, and 25sqm of extra space in the salon and main cabin – as mentioned by Perotti, “a little miracle – in keeping the symmetry in asymmetry.”

The design outcome is impressive, the operational conundrum has been turned into an elegant benefit. Clients as well have welcomed the project with great enthusiasm, with four units sold already, and one in advanced negotiations. The first hull is scheduled for launch in July, with her world debut at the 2018 Cannes Yachting Festival.

At the press conference, the yard has also announced that Piero Lissoni was appointed Sanlorenzo’s new Art Director.