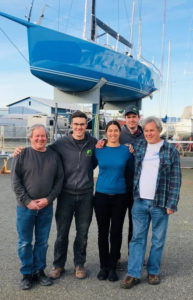 The latest name to sing up in support of the solo Pacific challenge of the athlete Lia Ditton, is the industry specialist Jim Betts. James Betts Enterprises will build the Antrim-designed ocean rowboat for Lia, that aims to become the first person to row solo across the North Pacific Ocean from land to land.

Thanks to the expert team behind Ocean Signal, that sponsors the ground-breaking project, in March 2020 she will attempt to row 5,500 nautical miles, alone and unsupported, from Choshi (Japan) to the Golden Gate Bridge of San Francisco. Not an easy journey: 18 attempts have been made to solo row from Choshi to the Golden Gate Bridge. Two were successful in reaching the west coast of the US.

As Lia remarks: “Both were men and both were towed the last 20 and 50 miles respectively, leaving the land-to-land record arguably up for grabs. My new boat has been designed to be competitive with the men’s records and to withstand a category 5 typhoon, the likes of which were rarer when the men’s records were set in 1991 and 2005”. Designed for maximum efficiency while rowing, and also while sleeping, resting and during ‘storm survival’, the new Antrim design has an ergonomic rowing deck custom to Lia’s dimensions.

After working together on other projects, Betts is reunited with naval architect Jim Antrim in creating Lia’s new boat that will be light, fast and safe, capable of withstanding capsize and the extremely tough conditions expected during the crossing. With safety a primary concern, Ditton is also supported by leading safety at sea specialist Ocean Signal as the Project Safety Sponsor. The Ocean Signal equipment includes two rescueME PLB1 Personal Locator Beacons, a SafeSea E100G EPIRB Emergency Position Indicating Radio Beacon, a SafeSeaV100 VHF handheld radio and a rescueME EDF1 Electronic Distress Flare.

Jim Betts said: “We are honored to be Lia’s first choice builder for her heroic quest. The sense of adventure and commitment it takes to even attempt this kind of endeavor should be an inspiration to us all and will have a profound impact on young girls and boys for generations to come”.

The talented team at Betts Boats has built first class boats of every type, from local club racers to America’s Cup Yachts. Aside from Jim Antrim’s designs, notable builds include: Lowell North’s private yacht ‘Sleeper’ that went on to race the Admiral’s Cup in Cowes, England; the Reichel/Pugh raceboat ‘Zephyrus IV,’ the overall winner of Cape Town to Rio in 2000; and Paul Bieker’s Riptide 35 Mk2 raceboat ‘Longboard’.

Naval Architect Jim Antrim added: “I’ve worked on numerous projects with ‘Jim B’ dating back almost thirty years. Betts is a joy to work with: enthusiastic, energetic, smart, and skilled. He’s ready to accept new ideas and quick to propose a better way to build. If there was an Oscar for boat building, Betts would have won for the prepreg methods he devised – that’s just one example of his brilliance!”.

Ocean Signal General Manager James Hewitt added: “We are watching Lia’s preparations with interest as she secures the support of some of the industry’s top names. She deserves to be backed by the best for her incredible challenge and we are really pleased that our products will give her the reassurance she needs when she is thousands of miles from land that she can reach the rescue authorities at the press of a button”.

Lia will cast off from Japan just before the Tokyo 2020 games, with her journey expected to take between four and six months.

For more information on Lia Ditton, go to www.rowliarow.com, follow Lia on Twitter @RowLiaRow or Facebook at www.facebook.com/rowliarow. To support the RowLiaRow crowdfunding campaign, go to www.patreon.com/RowLiaRow.