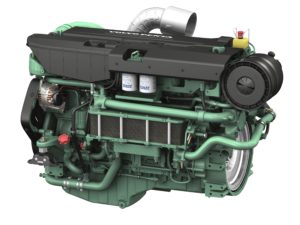 GS Marine built its first boat in 1993 and it made quite a splash in the market for being the largest molded pleasure boat in Norway at the time. This became the precursor to its first cruise ship – Nordic Lady – which was delivered in 1998. Now a major boatyard, GS Marine is delivering hybrid solutions to operators such as Strandfaraskip Landsins and Norled AS, with the help of Brunvoll – a single-source supplier of propulsion, positioning, and maneuvering systems – and Volvo Penta.

The power of three

GS Marine is currently building a new ferry for Faroe Island operator, Standfaraskip Landsins. This ferry will have a speed of 20 knots and be powered by two of Volvo Penta’s engines. The D13-700 IMO III engines have a power output of 515kW at 2,250 rpm and will be coupled with a Brunvoll hybrid control system – allowing the vessel to run on the engines or electric alone, and even both in unison. Still under construction, this ferry will not be fitted with diesel gensets, as the engines will, through the electric motor connected to the gear, act as generator. This means that the Volvo Penta engines will supply all energy on board – in addition to plug-in facility when in port. Delivering near-zero-emissions, as well as high speed at sea, this ferry will be a welcome addition to Strandfaraskip’s growing fleet of hybrid boats.

But this isn’t GS Marine’s first time building a hybrid boat. In April 2019 the company delivered the first of two, hybrid and hybrid-ready ferries to Norwegian operator Norled AS. Having recently signed a 10-year contract to operate the Haugesund-Røvær-Feøy route Norled invested in this new technology. The Fjordled ferry is the first hybrid boat operating in Norway, and her sister vessel Fjordöy is set to join her late this year.

In addition to the engines, the boat has two electric motors – with power outputs of 85 kW at 2,100 rpm – that are mounted directly on gears. The battery pack consists of three strings with a total of 140 kWh capacity (110 kWh is usable capacity). Due to the large battery capacity, there is no need to use standard generators to provide electric energy, allowing an uninterrupted power supply to electric and electronic systems on board.

“In Battery mode, the Fjordled is capable of 11 knots, but only 6-7 knots are required for harbor steaming,” explains Ingebjørn Aasheim, Naval Architect at GS Marine. “In Battery mode the boat is close to silent, which is much appreciated by locals and when passing popular marinas. Harbor steaming is approximately 30% of the operation, using electro-propulsion gives a better load profile on the engines, which in time results in less maintenance”.

“Additionally, the Volvo Penta engines can run on HVO fuel as well as diesel,” explains Richard Johansson, Area Sales Manager at Volvo Penta. “When you combine the SCR technology with HVO fuel you not only reduce NOx you also reduce CO2 significantly. Add the fact that they can also be powered by batteries and you have an extremely efficient system”.

Ferrying us into a low carbon future

These moves towards electromobility are vital if Norway is to achieve its long-term goal of becoming a ‘low carbon society’ by 2050 – with an 80-95% reduction below its 1990 carbon levels. However, current infrastructure cannot support full-electromobility and electric vessels cannot currently travel long distances. These parallel hybrids are therefore a good stepping stone – combining high cruising speeds achieved by diesel engines with emission-free battery power close to shore.

Volvo Penta is an active player in marine electromobility developments and continues to work hard to improve its power solutions – making them more efficient – to facilitate hybrid marine solutions.