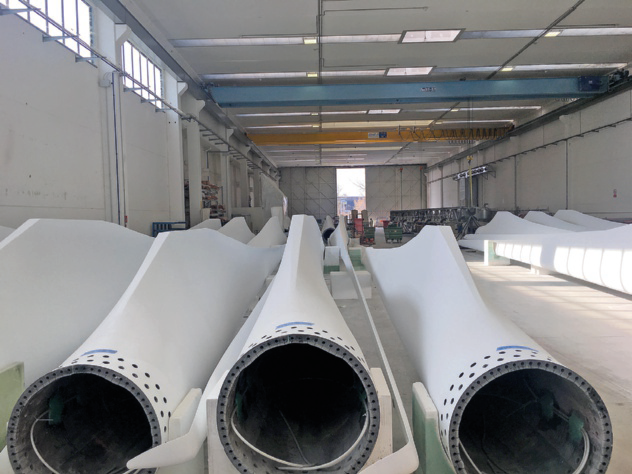 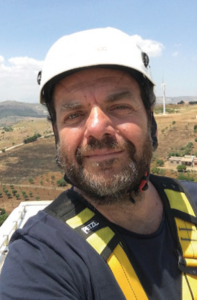 We spoke to Giovanni Manni, founder and CEO di eTa Blades, a young company formed in 2011 and specialising in the production of wind blades in composite materials with carbon fibre, whose roots are in yachting thanks to Giovanni Manni’s 20 years of experience in the sector. With a degree in mechanical engineering he entered yachting as head of composites in Wally Yacht, and was later called in by the Ferretti Group as Quality Director to build up from scratch the quality system of the entire group, a major challenge that led him to find solutions to design, production and industrialisation problems. eTa Blades has manufactured more than 2000 high-performance wind blades since 2011, thanks to advanced composite materials and construction techniques borrowed and metabolised from yachting.

What was your career in yachting, in particular in composite materials?

My career in advanced composites in yachting began in Wally, when advanced fibres such as carbon and Kevlar were only used in the America’s Cup and the big ocean races such as the Volvo Ocean Race. So I specialised in these very high level technologies that in yachting were developed by Wally for one-off production.
The next step after Wally was the Ferretti Group, as group quality director. Here I was involved with a much more extended concept of industrialisation. So there was more attention to production cycles quality control plans on big numbers and consistency in series production. In series production like that in the Ferretti Group it was also strategic to control suppliers. All this meant the Group was in the forefront with its quality system, which was partly borrowed from other advanced industrial sectors such as the automotive sector. So in my 20 years in yachting I have been involved both with very high technology productions such as the Wally one-offs, but also with mass production which meant working daily to optimise production cycles and industrialisation.

The start of eTa Blades. What was the start-up point? Why wind generation?

2009 – 2010, the great crisis in yachting, a sharp turnabout that led many operators in the sector to transfer their skills, sometimes with great difficulty, to other sectors. I asked myself where to take my experience in advanced composite materials and quality control. In particular the question I asked myself was: “which of the sectors where there is space to transfer and develop advanced technologies like those used in Wally, or processes tried and tested in Ferretti?” I found the answer in the renewable energy sector, in particular in wind generation, also because of production similarities. Both in yachting and in wind generation you built large objects in composite materials (initially in fibreglass), they have a double shell, almost like a hull and deck, there is the fluid dynamic aspect, typical of the sailplan, which is fundamental in the design of a wing.
So the challenge was to show how a sapient use of advanced composite materials, industrialisation techniques and all the other skills acquired in yachting could have brought innovation to win generation, making the products, the blades, more efficacious and efficient. So in 2011 eETa Blades was formed. 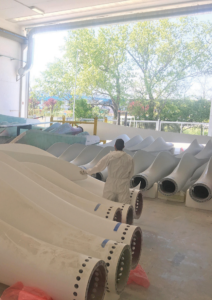 Let’s talk about technology transfer. What are the points of contact of wind generation with yachting. How much did your passion and experience in sailing and racing have an influence?

The first eTa Blades project was a blade made to replace an existing one, but considerably increasing its efficiency and so the performance of the rotor. This was possible thanks to in-depth design and the use of advanced composite materials. Laying down the fibres with a very detailed lamination plan made it possible, and continues to do so, to make much more high-performance blades because they are stronger, lighter and with controlled deformation. So our integrated design takes into consideration in the lamination plans materials such as carbon, not just to improve the mechanical strength of the product or drastically reduce its weight, but above all to control its deformation when in use. A 24 m long blade made by arse has controlled bending of up to 2.5 m. This kind of deformation, bend-twist coupling, has been studied to mitigate passive load. This feature comes partly from yacht racing, it is inspired by one of the many adjustments to the mainsail, which is twisted to take the load off the sale and make it more efficient. Greater efficiency means reaching the ideal relationship between cost reduction for wind turbines and improved yield of the systems.

From the inception of the start-up, what technological developments of the been? How have the technologies coming from yachting been evolved and transformed for the wind generation sector?

From the point of view technology transfer from yachting to wind generation, there has certainly been development because just using glass fibre it wouldn’t be possible to have such efficient aerodynamic profiles. As concerns the design of composite materials, eTa Blades began in 2011 from a very high level, replacing the glass fibre commonly used with carbon and designing is specifically delamination plans. All producers of traditional wind blades have always been at a high level both in composite design and component production, this was needed to guarantee, at least until 2011, the respective certification parameters, strength but without going to extremes in composite performance. In the past 10 years carbon has been used to optimise blade performance. This innovation was necessary also because, once all the windiest sites were saturated, it became necessary to obtain high-efficiency also in not particularly windy sites. We studied suitable profiles that deliver maximum efficiency in medium and low wind. This was possible using the correct fluid dynamics studies, with correct and detailed lamination plans and an accurate and detailed production process.
ETa Blades produced 870 blades in 2018 it is still a medium to small company, despite the numbers, but it’s clear that to be competitive you absolutely have to industrialise every step and above all design for production. You design having the production process and the tools you have available well in mind. Design to Manufacturing is the principle of eTa Blades and it is fundamental for optimising all the cycles to obtain a virtually perfect finish product in a much shorter time than it takes today in yachting.

Do you think there could be a reverse transfer back to yachting? Could the processes and technologies developed for wind generation bring benefit to yachting?

A benefit for yachting from my experience in the wind generation sector is certainly the design method: Design to Manufacturing. Yachting should, as some innovative yards are already doing, tackle these issues that make it possible to optimise and make more efficient yards that before could make money only because the market let them. It’s no longer like that today, margins can grow above all thanks to intelligent design and industrialisation. The margin for error in wind generation is N times lower than what you can get away with in yachting. Once the blade is mounted on site and fails to reach project efficiency with the typical wind on the site there’s not much you can do about it, unlike yachting where corrections and tweaking of trim and engines can be done after the boat is built.
This is the issue that should be taken to yachting, Design to Manufacturing. It seems to me to be more logical and effective to spend time and money in the design and industrialisation phase so you can then have a production process that is linear and lean right from the start, avoiding variables that simply increase costs and reduce margins. If you multiply the savings you get with correct initial design by the big numbers of mass production you can understand how Design to Manufacturing is a winning choice.

Plans for the future? Will you go back to yachting? Where do you expect to be in five years’ time?

I won’t go back to yachting except to go sailing, and the eTa Blades plan is to invade the world with our high-efficiency blades. I’m joking of course, but certainly our plan is to expand in the European market and above all in the replacement blade market for obsolete farms. The ageing of the entire European wind generation system opens new windows in the market for us. The aim is to avoid having to dismantle obsolete wind farms by integrating our blades with the old rotors. In this way, with a circular economy, we avoided the major economic and environmental impact of disposing of old farms.

A question you have to ask a company in the renewable energy sector. The circular economy and reduction of environmental impact are two key aspects no company can undervalue today. How are they tackled in eTa Blades?

As I said, we are aiming to lengthen the life of wind farms by replacing old blades with new generation ones. In this way we lengthen the life cycle by 20 years. In addition, inside the company we are limiting disposal cycles by concentrating on reusing materials, recovering and working on scraps. There are several ways of recovering composite materials, both scraps and unused pieces. Currently we are in contact with a company that is developing technology starting from pyrolysis to obtain dry material (short fibres) and liquid residues from the matrix that can be put back in resins that are then used in later lamination.