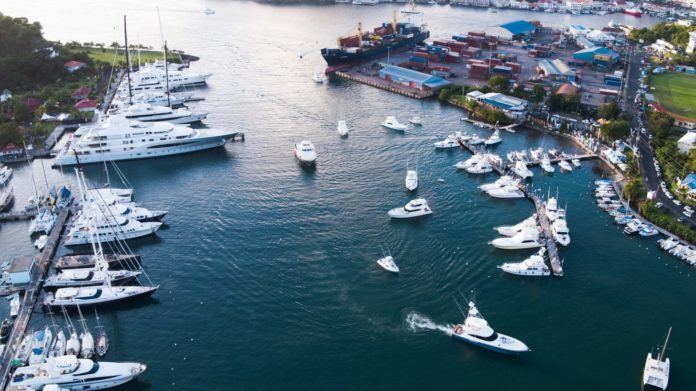 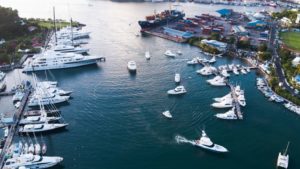 The Caribbean is a part of the Americas that includes all the countries on the Caribbean Sea, thus all the islands of the Antilles and assures of some continental countries of Central and South America that face the sea. The presence of coasts and marine environments with differing characteristics, the closeness of the Atlantic coast of the United States and an increase in the number of tourist ports are creating optimism for the development of the area, which has growth potential. In 2016, sales of American yachts and accessories in the Caribbean exceeded $50 million. This is a little less than in the previous three years, but still a significant result.

The Bahamas are one of the most stable economies in the Caribbean. In recent years this country, part of the British Commonwealth, has more than doubled the number of marinas. According to the Association of The Bahamas Marinas, there are about 60 tourist ports in the country. New developments are expected in New Providence, one of the most populated of the Bahamas. The number of tourist ports is also increasing elsewhere and local designers are collaborating with American companies. The closeness to West Palm Beach, in Florida, facilitates exchanges with the United States; accessories and services can be purchased in Florida and brought to the Bahamas by representatives of many American companies active in the Caribbean.

Barbados is an independent island state in the Commonwealth. Part of the Lesser Antilles, it is between the Caribbean Sea and the Atlantic Ocean. Bridgetown, the capital, is a naval port with colonial buildings. In the past three years, the Barbados government has invested about $2 million in updating infrastructures at the Careenage mooring structure in Bridgetown; there are plans for further updates. The Barbados government has also announced that it wants to relaunch the Pierhead Marina project in the capital, which could improve the yachting capacity of the island and further develop yachting and tourism.

The Dominican Republic, located in the eastern two thirds of the Caribbean island of Hispaniola in the greater Antilles, has almost 1000 miles of coastline; it has one of the most varied coastal environments, ranging from desert to lush coconut palm forests.
Interest in yachting is growing every year in the country. But the local production of boats is currently limited to small fibreglass craft for excursions to local beaches. Larger yachts are bought from foreign producers. Luxury yachts tend to be purchased from Italy, while American brands are preferred for fishing and sporting activities. In recent years, the country has more than doubled the number of full-service tourist ports, some with unique features not often available in the Caribbean. Currently yachts of up to 250 feet overall can moor in the Dominican Republic. The main tourist ports include Casa de Campo Marina in the south-east, Cap Cana and Punta Cana Marinas in the East, the ports of Puerto Plata in the north and of Santo Domingo in the south. Cap Cana Harbor & Marina is a tourist port for megayachts, one of the biggest in the Caribbean. A private shipyard offers repairs and maintenance to big boats while smaller yards and service suppliers handle repairs and maintenance fee yachts.

Trinidad & Tobago, a republic in the Lesser Antilles, has two main islands, Trinidad and Tobago, and 21 smaller ones. Trinidad is the largest and most populated of the main islands, Tobago is much smaller and includes about 6% of the total surface area and 4% of the population. The largest tourist ports in Trinidad and Tobago are the Trinidad & Tobago Yacht Club and Crews Inn. There is a long waiting list for joining local yacht clubs and tourist ports for Trinidad and Tobago citizens. But the arrivals of yachts have dropped from about 2600 to 700 year, because of particularly complex customs and immigration procedures for foreigners, unlike the situation in other countries of the Caribbean which have streamlined procedures. Powerboats Boatyard and Peake’s are the two largest boatyards for repairs in the country.

Among the more recently designed tourist ports in the Caribbean is Christophe Harbour on St Kitts, an island which, together with Nevis, is a Central American island state.
Its position in the eastern Caribbean makes St Kitts a good place for yachting holidays aiming for destinations such as the Leeward Islands, Antigua, St. Barts, St. Maarten and Anguilla. The project for building Christophe Harbour began in 2014, aiming to welcome the first yachts at the start of 2015. The first phase of development of the tourist port was to build 24 berths for yachts from 85 to 220 feet. There was room to build a village on the shore with restaurants, bars, hotels and shops. As a designated entry port, the Christophe Harbour Marina offers fast customs clearance, duty-free concessions for fuel and other advantages. Safety is guaranteed 24 hours a day; access to the port is always monitored.

Founded with the aim of making it easy for yachtsmen, sport fishermen and motor boat owners to find accessories for their boats and maintenance, Budget Marine Trinidad has been operating since November 1996 when it opened in Chaguaramas, on the northern peninsular Trinidad west of Port of Spain, in a historic building that originally housed American military equipment from the Second World War. In 2002 the Skinner family, which already in 1996 had signed a joint venture with Budget Marine Group to set up a yacht chandlery in Trinidad, designed and built a large new structure in Chaguaramas.
Despite the difficulties of the worldwide recession, Budget Marine Trinidad has held on to its important position in the Chaguaramas business community. Today the company also has an outlet at the Trinidad & Tobago Yacht Club (TTYC) where it is also possible to order products not in stock and collect them within a day in the main shop in Chaguaramas.
Currently Budget Marine is concentrating on training staff working in the 13 offices throughout the Caribbean.

Founded in 1994 by Fred & Béatrice Wojcik, Polypat Caraibes is the oldest boatyard in the French part of Saint Martin in the Windward Islands in the Lesser Antilles, about 240 km from Porto Rico. After living in Brittany, the founders of Polypat Caraibes decided to move to the French West Indies to offer professional services. Today the Polypat Caraibes team offers maintenance and repair services, laying up during the hurricane season and many other services. Among the specialities of the yard on the repair of structures in polyester and composite’s, interior design, modification of yacht components and the design of one-off components. The yard, which also produces small craft, also offers boat cleaning, treatment and prevention for osmosis and gelcoat application.

Bajan Ocean Yachts Sales: yachts and services for every need

Bajan Ocean Yachts Sales and Service is a yacht sales and services company. Based in Port St Charles Marina in Barbados, it sells new and used yachts and offers services including external and internal yacht cleaning, engine and electrical and mechanical systems maintenance and repair, yacht transport, bottom painting and zinc replacement, waxing of the hull and topsides. Among the services offered by the company is the possibility for customers to attend lessons on the workings of a yacht.
Among the brands handled by Bajan Ocean Yachts Sales are Princess Yachts, Worldcat, Axopar Boats and Grady-White. The company also supplies Seakeeper Gyroscopic Anti-Ross Stabilizers, designed to improve vessel stability.