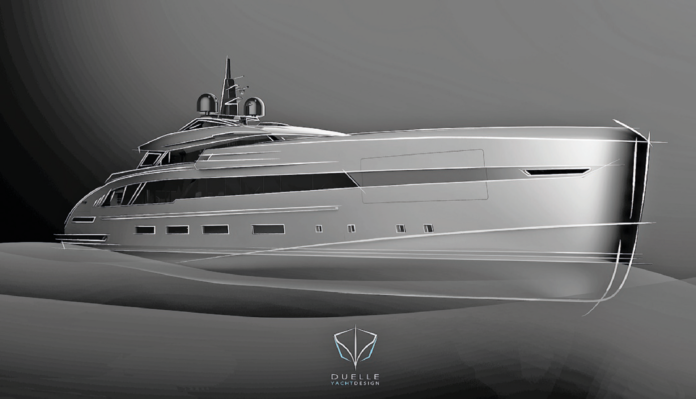 The Duelle Yacht Design studio was founded in 2019 by designer Michele Lubrano Lobianco. After years of working with the major world-famous design studios, Michele chose Italy and Ancona to put down roots and create his own studio.

He studied at the University of Genoa at the Marconi centre in the city of la Spezia and graduated in Yacht Design. After experiences in Intermarine and Ferretti Yachts, he moved to Australia where he designed his first boat, a 70 foot fibreglass yacht, in one of the leading Sydney Studios, Peter Lowe Design. Soon after returning to Italy he became the right hand of Francesco Paszkowski in his famous studio in Florence, spending seven years there and contributing to many successful projects for San Lorenzo, CRN, Baglietto, Heesen and Tankoa as head of the design department. Thanks to his vision and innovative approach to design, he was chosen in 2014 to join the project team of Wider Superyacht, the latest futuristic creation of Tilli Antonelli, as “head of design” of the Wider 150 (MY Bartali), and later on the Wider 165 (MY Cecilia) which has just won the World Superyacht Awards 2019. In 2018 he joined Dominator Yachts where he oversaw the design and construction of the interiors of two fully customised Ilumen 28 mt yachts, one of which won the World Yacht Trophy in can Cannes 2018. His experience both in studying design and in production sites gave him an all-round vision of the creation of a yacht and great ability to blend an attractive design with valuable technical solutions.
At the beginning of 2019 he took the most important decision of his life and founded the “Duelle Yacht Design” studio to bring his vision and style to the yachting sector and finally walk alone; the time was ripe.

The creative process from concept to yard 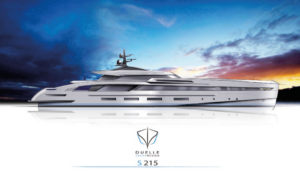 Thanks to Michele’s experience as a designer, from his postgraduate days to the present, the Duelle Yacht Design studio can combine several competences and skills so as to guarantee correct implementation of all the phases of a project. A particular feature of this studio is the in-depth knowledge of production processes, thanks again to the work experience of Lubrano Lobianco who has supervised the various phases of construction in many famous shipyards. The studio can thus supply a functional project both for the owner and the yard without the risk of mistakes or hold-ups that create confusion and waste time. Style and design competences are perfectly integrated with technical and production skills. Managing and handling a project that right from its initial phases respects the construction and the yard certainly helps the build process by diminishing or even eliminating errors and problems that typically arise between the design phase and the build phase.

“Working with the yards is fascinating. There you can see craftsmen at work, it’s a real school. There are aspects of this sector that you can only learn in this way,” says Lubrano Lobianco. The technical and aesthetic dialogue between the yard and the designer is a two-way process. On the one hand the yard supports the choices of the designer and on the other the designer must be able to design elements that are feasible and not just the typical abstracts of an exercise in style on paper. A good yard can follow the aesthetic choices and be willing to experiment and, if necessary, work outside tried and tested processes. Looking at it from the other point of view, the presence of the designer in the yard makes it possible to maintain aesthetic coherence by finding a compromise when technical limitations mean the design as conceived on paper is not feasible.

The Mega Yacht Gladius is the first concept from the new Duelle Yacht Design studio.
Gladius, a Roman sword, is perceptible in the lines of the profile: lines that are elegant and aggressive but very clean and sporting. This concept was chosen for the International Yacht & Aviation Awards 2019. 65 m overall and 11.5 in the beam the draught fully laden is 2.15 m and the gross tonnage 950 GT. Gladius has a hull and superstructure in aluminium and two MTU engines with a total power of 11,184 hp. It has a top speed of 26 kn and a cruising speed of 22 kn. The ranges about 4200 miles at an economic velocity of 12 kn. The yacht has six cabins (five the guests), a gym, two customised jacuzzis, a cinema, heliport on the foredeck and a garage that can comfortably hold a 10 m tender.

Gladius sprang from a very precise request: to create a yacht that was very large but sleek, sporting and slim despite her size. This yacht, currently the largest created by Michele Lubrano Lobianco, is thus to him a challenge and the new objective for his career and his work. In all projects designed by Lubrano Lobianco one can see the desire to create lines that are light and clean, with an almost maniacal search for a design that will last over time without being either banal or redundant. These elements can all be traced also in the concept of the MY Gladius; a stylistic and courageous choice that characterises it particularly is the full-beam saloon amidships. Although this choice of the wide-body saloon loads the yacht amidships, the overall look, above all the profile, is not happy but rather harmonious and balanced. Positioning all the space amidships means it is less noticed and this choice defines spaces and volumes without making the design heavy.

The superstructure joins the hull in a gentle manner without breaks or steps giving the impression of a single homogeneous body. The length of the yacht made it possible to make the hull-deck join disappear and create proportions that can support these stylistic choices. The lines start from the bow and reach the stern without interruption or elements that would disturb this stylistic gesture. Every line has its own logic and has a precise tension, and in this way the design is clean and simple. There is one word that includes all the design philosophy of the Duelle Yacht Design studio: equilibrium.

Young, dynamic and aggressive, this concept will get itself talked about. We await with excitement and curiosity other news from the new Duelle Yacht Design studio. One thing is for sure: we will be waiting with trepidation; a new pearl is entering the national yachting panorama, and it’s only the beginning.