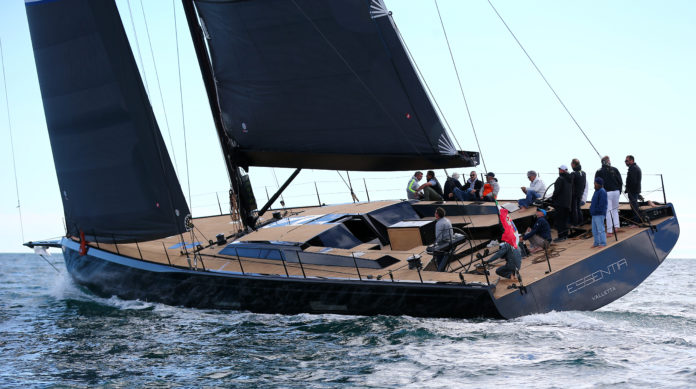 In recent years there has been a small revolution within the yard Cantiere del Pardo, that produces highly customizable made-in-Italy yachts since 1973. In terms of the company, after a management buyout in October 2018 Fabio Planamente, formerly director-general and today managing director, and Gigi Servidati, formerly sales director and now chairman of the board, became majority stakeholders in Cantiere del Pardo. The operation was followed by an increase in capital of 5 million Euro. In terms of the market, the most impressive results came from motorboats. But let’s take a step back.

Founded in 1973, the yard made its name in sailing with its fine and fast boats which became an iconic brand that marked the history of Italian sailing. In 2017, after selling 4000 sailing yachts, it entered the motorboat market with the Pardo Yachts brand. It was a turning point. In less than three years the brand became an important name in the Mediterranean open sector and it sold almost a hundred boats launching a new model every season.

Last summer the 80 foot Grand Soleil made its debut, a maxi 100% in carbon designed by Giovanni Ceccarelli. Then at the Cannes boat show in September another two new models were presented: the Pardo 38 and the Grand Soleil 42 LC. But Cantiere del Pardo is travelling fast also in terms of numbers and 2018 was a year of great growth: it built 40 sailing yachts and 30 motor yachts and turnover in the year was about 31 million Euro, an increase of 35% on the previous year, with 65% accounted for by sailing yachts and 35% by motor yachts.

Three seasons have passed since the launch of the Pardo Yachts brand and three new models have been introduced. With the Pardo 38, launched at the Cannes boat show last September, came the latest of the walkarounds designed by Zuccheri Yacht Design in collaboration with the yard’s own design office.

The look is that of its big brothers: a sporting open with a modern concept, with vertical sides that are high for the entire length of the boat and an aggressive inverted bow. For this 12 m of the yard offers versatility in the propulsion system which may be both outboard (with two or three engines) or inboard/outboard, with a total of seven different configurations and a maximum of 1050 hp. It is also possible to install a joystick to facilitate control of the boat.

Designed with a variable geometry deep V hull and convex bottoms, the vessel is designed to plane safely, be seaworthy and have significant form strength. The hull is laminated by hand: the bottom and keel are monolithic while sides and deck are in high-intensity PVC sandwich to optimise structural rigidity.
The T-top in carbon, which protects the helm with its three seats in the dining area, can be combined with an electrically opening bimini to cover the cockpit as well. The standard flooring is in teak, but synthetic is available as an option.

The interiors are open space with a large double bunk and bathroom. On request two single bunks can be added astern beneath the cockpit, forming a second cabin.

The Long Cruise range has been strategic for Cantiere del Pardo: launched in 2015 with the first model, the 46 LC, followed by the 52 in 2017, last year at the Cannes show it presented the “little one” of the range: the 42 LC. The design is by Marco Lostuzzi, known for his fast and race-with winning designs who worked in collaboration with Nauta Design and the yard’s design office.

What changes between the standard version and what the yard calls the Sport version? In the latter, there is no rollbar (fitted to free up the cockpit and provide an anchor for the mainsheet) and on the cockpit floor there is a fixed point for the mainsheet. There is no self tacking jib (with a recessed track) but instead traditional tracks for a 106% jib. The sailplan also changes, on the Sport version it is larger thanks to the larger mast. Also, the shrouds are rods and not wire and the cockpit is open astern, without seating and lockers.

Apart from this the two models have an uncluttered deck with broad side walkways; for sailing shorthanded, the controls passing under the flooring arrive at the winches alongside the two wheels. The portholes on deck are flush, and at the bow is a carbon bowsprit for asymmetricals and code 0 and there is an integrated support for the anchor. Below deck level a more sporting detail the two versions share, the jib roller reef.
Below decks the layout can offer two or three cabins, in both cases with two bathrooms.

100% carbon for the mast (stepped on deck), hull and deck of the yard’s 80 foot Flagship, built in the Fano establishment where Grand Soleil big yachts are built. Essentia is in a flush deck version with a low sleek deckhouse that almost disappears; it has a rudder blade and T-shaped bulb of about 12,000 kg (37% of its displacement). Sail area with main and jib is 365 m².

The interiors have been designed to provide two well separated zones for the crew, astern with a separate entrance in direct communication with the chart table, the galley and the engine room, and for guests, forward.
In addition to the flush deck version there is also one with a raised saloon that uses the same hull but has a redesigned deck and interior. A more “sedate” yacht with a smaller sailplan (325 m²) and slightly higher displacement (35,000 kg).