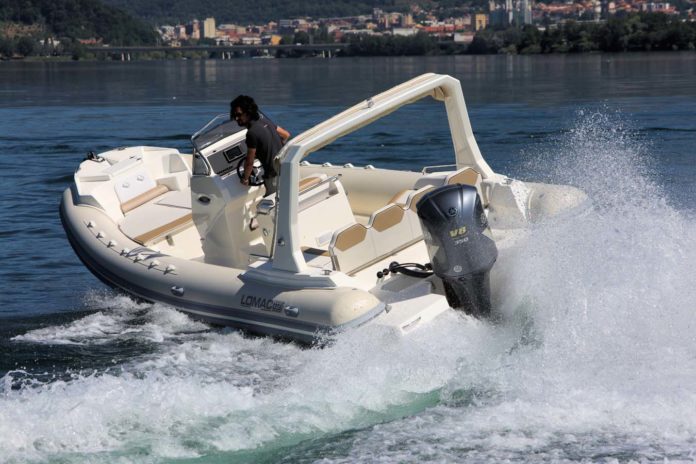 Following the success achieved at the German boat show in Düsseldorf, the Lo Manto cousins’ shipyard will also take part in NauticSud in Naples, from 9 to 17 February, together with dealer Performance Mare, a well-known company in the area and partner of Lomac for several years.

For this year’s event, one of the most important boat shows in Italy, unmissable for those who produce inflatable boats, five models have been chosen from two very popular and fascinating ranges aimed at different age groups.

The recent Granturismo range, aimed at the ever-increasing number of families who choose the Lombard shipyard, will be represented by the elegant Granturismo 10.5, which is inspired by the 1000 IN, yet stands out for some details aimed at increasing safety and comfort on board, such as the taller side tubes and the large cockpit incorporating a larger berth cabin. The key feature of this model is the sundeck both at bow and at stern, including a table that can be converted into a sunbed.

Three models from the IN range will be on show. The longest is the 850 IN, featuring a table with telescopic legs, in the stern, which can be converted into a sunbed, a seat with sink and a toilet or stowage space, while the bow houses another seat and a peak. The awning is fitted with a fibreglass roll bar and can be extended to cover the bow area. The 660 model, on the other hand, is 6.54 metres long and has a capacity of 14 people. The power of the engine can vary depending on the owner’s needs and requirements, up to a maximum of 175 hp. The latest model in the range is the 600 IN: 5.95 metres overall (and 2.47 metres wide) for a capacity of 12 people and a maximum power of 150 hp.

Lomac will be at NauticSud from 9 to 17 February