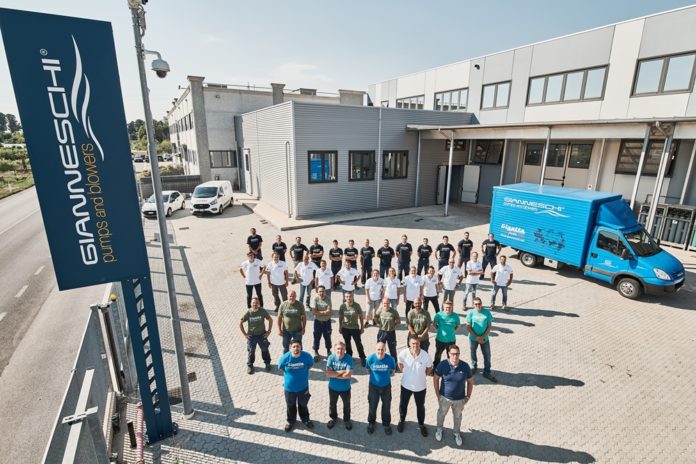 Specialising in the design, manufacture and supply of a wide range of products mainly for luxury vessels, yachts, mega yachts and trigger yachts of more than 150 m, Gianneschi pumps and blowers celebrated its first 50 years of activity in 2019. It’s not a point of arrival but an important passage that further consolidates the leading role the company plays today nationally and internationally.

The great value of the Made in Italy

Versilia has always been synonymous with a passion for yachting, with a technological area that has given life to recognised products made in Italy that are appreciated inside and outside national boundaries. Behind this success there is also farsighted Tuscan entrepreneurism, where craft skills and innovation are transformed into products and services with a high added value that can make their mark anywhere in the world.

As is the case of Gianneschi Pumps and Blowers, a company specialising in the design, production and supply of products and services with high added value the yachting that can satisfy the most varying requirements of luxury vessels, yachts, mega yachts, jigger yachts, work boats and small military vessels from 12 to more than 140 m overall, which this year celebrates its 50th anniversary.

“It’s not a point of arrival,” says co-managing director Alessandro Gianneschi, the second generation at the helm of the company together with his brother Cristiano, “but an important passage that consolidates what has been done so far with an eye on the future and on new challenges in the market.”

From a small workshop to a big company

Founded in 1969 by the father of Alessandro and Cristiano, Luigi Gianneschi, who unfortunately died prematurely in 2016, the company was initially a small electromechanical workshop selling and repairing motors, electric pumps and accessories, and making industrial electrical plant and switchboards. It continued in this way for less than a decade, until Gianneschi’s entrepreneurial intuition convinced him to start producing solutions specially designed for yachting in the marine environment: pumps, electrical pumps, autoclaves, electric ventilators, boilers, compressors and motors.

“The decision proved a winner,” says Alessandro Gianneschi, “especially from the 1990s on, when yachting became our main sector of reference.”

And it was in those years that new growth opportunities were created and the company began acting increasingly decisively also outside Italy, thanks to the entry into the company of Alessandro in 1997 with the task of cultivating new relationships also with markets considered as emerging for the yachting sector at the time. Year by year the product range also continued to expand.

A determining contribution came from the elder son of the founder, Cristiano, who joined the company in 2002 to coordinate the design office and handle research and development in addition to the quality system.

Competences and know-how that in the following years led Gianneschi Pumps and Blowers to launch innovative products including the Control Pump (variable speed autoclaves) and Control Fan control systems that contributed to the growing success in supplies for mega yachts. “A success,” says Alessandro Gianneschi, “that required an inevitable acceleration to keep up with increasingly competitive markets.”

After purchasing in 2004 100% of Gianneschi & Ramacciotti Srl, changing the name to the current Gianneschi Pumps and Blowers srl, the Gianneschi family planned new investments and implemented new growth strategies. In 2005 it formed G.S.I. – Gianneschi Service srl, owned by the family, to handle after sales service for Gianneschi Pumps and Blowers, focusing on repairs, maintenance, service on board, start-up and organisation of control systems powered by an inverter. The following year new spaces per production were inaugurated, the headquarters expanded, new technologies integrated and logistical management optimised.

“The production area was increased,” says Alessandro Gianneschi, “to a total of 4000 m² of covered space where about 20 staff were employed, and today both these figures have doubled.”

The crisis as a chance to grow

As is well known, the first years of the new millennium were the yachting (and not only yachting) a very florid period when companies recorded interesting growth rates and profit increases.

“Until 2008,” says Alessandro Gianneschi, “when we were faced with years that were notoriously much more difficult we still tried to exploit the opportunities. How? By exploiting our knowledge of the market and broadening our range of action. We not only improved our solutions for increasingly large yachts and mega yachts, but developed also new solutions for tugs, work boats and military vessels.”

Equally important was the strength of the company, thanks to financial stability, in managing to maintain its staff and preserve competences and know-how. This, in the upturn that came in the following years, helped, alongside the new market targets, in the development of several collaborations with system integrators for the supply of products and solutions suitable for air treatment, circulation and cooling systems.

“From 2008 to 2015,” says Alessandro Gianneschi, “with a turnover that after losing more than 45% remained substantially on varied or grew by a few percentage points, we nevertheless managed to increase exports substantially, passing from 15% to 45%.”

Since 2016 the turnover of Gianneschi Pumps and Blowers is growing again by to figure percentage points every year, up to about 12 million Euro last year, with interesting prospects and the same trend also for 2019.

2016 was a year with a double meaning for the Gianneschi family. On the one hand they faced the premature death of the founder and, on the other, managed to complete the extension he greatly desired, with a production surface and new sheds that double the overall covered area to the current 8000 m².

“A structural and organisational evolution,” says Alessandro Gianneschi, “where technologies and state-of-the-art levels of automation allowed us to be increasingly competitive as well as increasing production capacity. But we can’t just stand and look on, we have to lay new and solid foundations for further growth. We are already implementing precise strategies for the coming three years. First of all the new testing room which will allow us to trace the characteristic curves of electric pumps in a faster, more precise and detailed way.”

Consolidation and, at the same time, dynamism and flexibility to keep extending the market served, at the same time increasing the product portfolio (standard and custom) with an uncompromising and certified level of quality. Quality for Gianneschi Pumps and Blowers means total quality, 100%, since every product or complete system produced is tested individually and only after strict controls and tests in accordance with the current regulations of the main naval registers is delivered to the customer.

There is also a guarantee of traceability: a specific registration number is assigned to each product that makes it possible at any time to trace all the components used in production and any spare parts.

“Experience,” says Alessandro Gianneschi, “competences and a passion for yachting of the Ras the motor of innovation, the key for continuing to look forwards, knowing that we can successfully tackle the new challenges in the marketplace.”