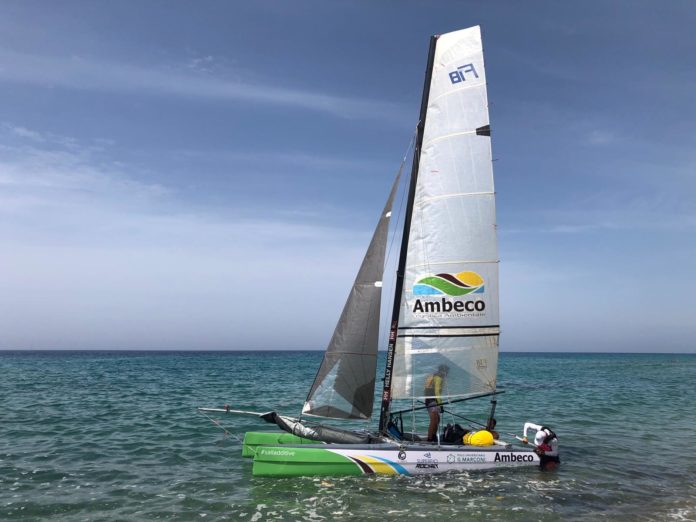 It’s not breaking news that our seas are in danger, threatened by the ignorance of many people who still believe that throwing a cigarette stub on the beach is an innocuous gesture.

Many species of underwater fauna and flora are risking extinction, because that’s the way we wanted. The finger is being pointed against the consumer mentality, against those who remain indifferent or exclaim “water problem” when they see islands of plastic sailing the oceans on the TV news as they sip mineral water from a PET bottle in a plastic cup.

There are many articles by now describing how critical the environmental situation is and this article is just a small contribution from an all-green mission carried out by three university students to promote environmental awareness and the need to protect the seas: Alberto Brioschi, Davide Papapicco and Dario Ricci.

It all began on February 2019 thanks to a lucky meeting with Gaspare Chiarelli, owner of the Ambeco company that specialises in refuse treatment and disposal. The company, already involved in sustainability issues and the sport of sailing through its sponsorship of Ambrogio Beccaria, was immediately willing to support the initiative.

Also fundamental was the support from the G. Marconi University Centre in La Spezia, which through the heads of the air force barracks in Cadimare made it possible for the three students of the Naval and Yacht Design degree course to use a perfect logistical base in the Gulf of La Spezia where they could prepare the Formula 18 catamaran for the initiative.

With the arrival of the summer and after getting used to the boat with training and racing, they launched the objective of circumnavigating Sardinia to help make people aware of the problem of pollution in the sea.

Technical knowledge and confidence with the boat were needed to tackle safely a voyage of almost 500 miles. They needed the help of a lot of people because, as well as the technical aspects, there was the need to coordinate all the aspects of navigation and logistics on land.

After having carefully perfected the rig, studied the forecasts and defined the stages, the voyage of Dario, Alberto and Davide began last year, on July 3rd, from the beach of Pittulongu, just north of Olbia.

The first legs of the circumnavigation in the north of the island were a tough test of their enthusiasm, because after just 60 miles they had to cope with a broken bowsprit after a manoeuver in a stiff breeze. Fortunately they met people who gave their help and allowed them to carry on, more motivated than ever.

Davide Papapicco had the indispensable role of shore team organising logistics on land and solving all the problems that cropped up. On his motorbike he followed the route of the catamaran and co-ordinated all the procedures for hauling out the boat by VHF.

On all the beaches Davide, Alberto and Dario visited, they distributed free to bathers, structures, kiosks, restaurants and any activities in the various lidos ecological cigarette butt holders designed and made specially for the occasion.

The end of the trip

Their trip all along the northern side was slow and even frustrating because, against all forecasts, the wind just did not arrive or, when it did, blew so hard it was impossible to set sail. Finally, after six days, they reached the final stop on the north of the island, in the turquoise paradise of la Pelosa in the territory of Stintino.

Here they had an encounter with Roberto Tavazzi, an important figure in windsurfing, who praised their initiative and welcomed them to his Windsurf Centre in Stintino.

The arrival was for the guys an indescribable thrill, sometimes they could hardly believe they’d really done it, finishing such an ambitious project.

Alberto, Dario and Davide share the sensation with all those who helped them: Ambeco, the G. Marconi University Centre, families and friends, and from everyone they met on the beaches, who came over to the catamaran and accepted with pleasure the cigarette butt holders they offered them, those who saw them picking up rubbish and also asked to follow their adventure on the social networks.

It was a result that paid their efforts, confirming that the simple message carried by them round Sardinia was in reality very powerful and fortunately not a few people received it.