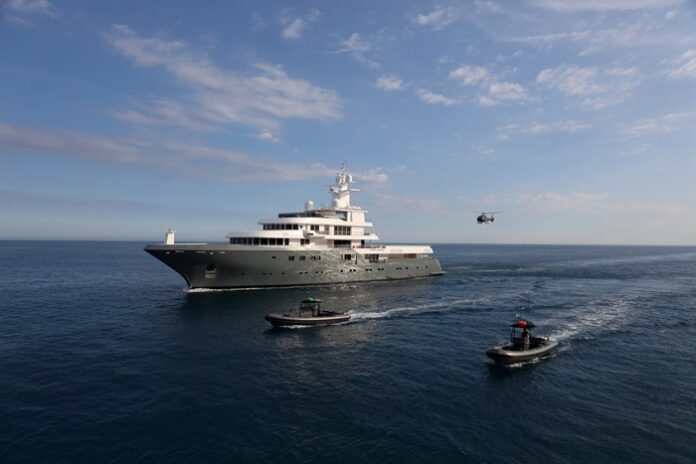 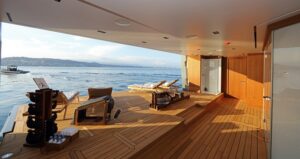 Planet Nine, the 75-meter motor yacht explorer of the Admiral fleet, is the protagonist of the filming in Italy of Tenet, the new action sci-fi by Christopher Nolan with John David Washington, Robert Pattinson, Michael Caine and Kenneth Branagh.

“Tenet”, released in Italy by Warner Bros Pictures since last August 26, was shot in seven different countries. In Italy, the main shots were taken on the Planet Nine motor yacht in the waters off the picturesque Amalfi Coast which, for production needs, replicated the coasts of Vietnam.

Features of the Tenet’s yacht

With its six decks, steel gray reinforced hull and Planet Nine helicopter platform, it was chosen because in line with the characteristics of Andrei Sator, the antagonist of the film played by Kenneth Branagh. The motor yacht is his palace, his refuge and gives an idea of ​​how he faces the world. 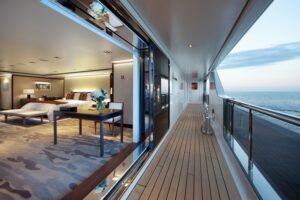 The main deck of the Planet Nine is entirely dedicated to the owner, and it has an area of ​​over 300 square meters divided into two distinct areas, the main cabin towards the stern and the lounge area and a second cabin towards the bow, also on the main deck, but with exclusive access from the upper deck, there is a real theater room equipped with a 119 ”large screen.

The upper deck is dedicated to guests with a large panoramic observatory lounge at the bow. On the lower deck there are 5 guest cabins and 1 cabin for the owner’s staff. You also have direct access to a large beach club and spa with a large terrace overlooking the sea.

The fourth deck houses the wheelhouse and a comfortable VIP cabin in the aft part.

Space for tenders and an helicopter

The yacht is equipped with two Rupert Marine 32′ tenders with dual engines stored in the aft area of ​​the main deck in two dedicated tender bays.

Admiral “Planet Nine” has a helipad designed to accommodate an “Agusta Grande” helicopter, with a heli hangar below and a refueling station. There is also a cabin and an office for the helicopter operator on board, a feature that is unique for a yacht of this size.

The interior design guarantees comfort and large spaces both in the suites and in the various common areas, and these spaces recall the classic flavors and elegant atmospheres typical of old-faschioned yachts, but with a touch of sober modernity.

The shipyard wanted to reproduce the comfort and intimacy of a home, with the intention of experiencing the spaces on board for a good part of the year. The style is elegant and contemporary.