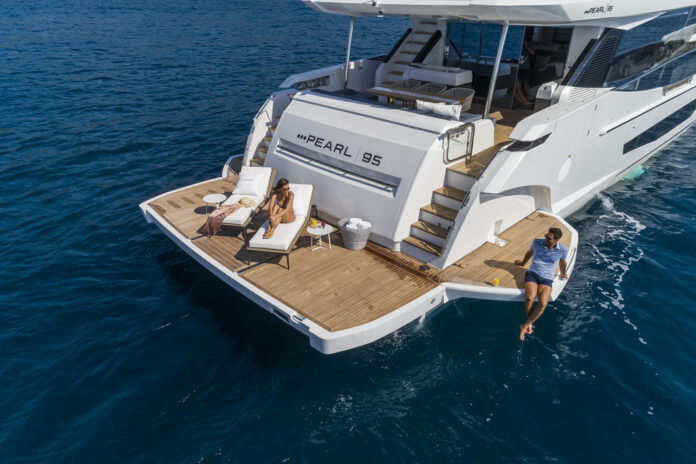 Luxury motoryacht builder Pearl Yachts, which has grown slowly but surely over the past 20-plus years, is presently enjoying worldwide acclaim on several fronts. The brand and its striking models, all of which are designed by Bill Dixon and have interiors by celebrity stylist Kelly Hoppen, have won multiple awards in recent months and are on nominee shortlists for several more.

Most recently, both the Pearl 62 and Pearl 95 were category winners at the virtual Oceanway China Yacht Show in Hong Kong. Plus, the Pearl 95 earned a special credit as ‘Most Popular Superyacht from 24-40m’.

Other great recognitions for Pearl Yachts

Moreover, the Pearl 62 has just been announced as a finalist in the ‘Flybridges Over 50ft’ category at the upcoming 2021 Motor Boat Awards. These widely respected awards are judged annually by the editorial team at the UK monthly magazine Motor Boat & Yachting and are usually declared in early January.

Plus the 62 is one of five brand new yachts nominated for a 2021 European Powerboat of the Year Award in the ‘Up to 20m’ category. With the results announced in late January, normally at a gala held on the first evening of the annual Boot Dusseldorf show, but this year virtually, these prestigious annual awards are presented by eight of the continent’s most prominent boating media titles – namely Boote (Germany), Boatmag. it (Italy), Batmagasinet (Norway), Marina. ch (Switzerland, Motorboat (The Netherlands), Nautica y Yates (Spain), Neptune (France) and Yachtrevue (Austria) – each of which contributes senior members of its editorial teams for the rigorous judging sessions.

“We are honoured at the recognition from the international yachting media,” says Pearl Yachts’ managing director Iain Smallridge. “We know we compete well with the biggest production motoryacht builders in the world on a day-to-day basis, but it is very gratifying to know that, beyond our own small, dedicated Pearl team and our loyal customer base, others also appreciate all our hard work.”