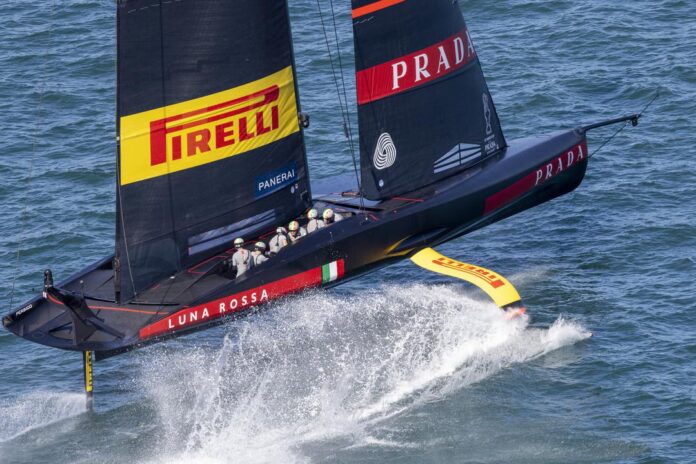 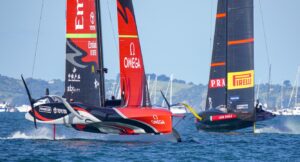 Racing on Saturday ended with the teams drawn again at 3-3 overall after what were practically two mirror image races.

Luna Rossa won the first by a handful of seconds, while the New Zealanders punished them in the second to win with a lead of almost a kilometre and a half.

There was the usual breeze of around eight knots for the start of the first race, Luna Rossa entered the pre-start on the starboard tack, tightly marking New Zealand, then tacked ahead of them. As they did so, the New Zealanders experienced a nasty wind shift that brought them down off their foils and struggling to get up again.

Luna Rossa made the most of their plight to cross the start with a lead that quickly reached 200 metres. Reading the wind well they controlled their opponents from a distance and made the top mark 32 seconds ahead. On the following downwind leg the Italians decided to follow the wind rather than mark New Zealand, did it well and rounded the mark still 32 seconds in the lead.

The second upwind leg saw Luna Rossa choosing the left hand side of the course and the New Zealanders the right, where they managed to reduce the gap to 22 seconds at the mark. But the Italians were still in control and the New Zealanders had no chance: Luna Rossa led by 27 seconds at the second downwind mark, by 23 seconds after the upwind leg and finished with a lead of 18 seconds.

The second race was a mirror image of the first. The Italians stayed well back in the pre-start while the New Zealanders built up speed close to the line. Then a nasty wind shift brought Luna Rossa down off her foils and she struggled to get up again.

Meanwhile New Zealand made a perfectly timed start and streaked off with a lead of 200 metres. And it was all over bar the shouting. Leg after leg the New Zealanders built their lead, to more than a minute halfway through as the Italians laboured desperately along behind. New Zealand crossed the line one minute 41 seconds ahead to bring the overall score so far to a 3-3 draw.