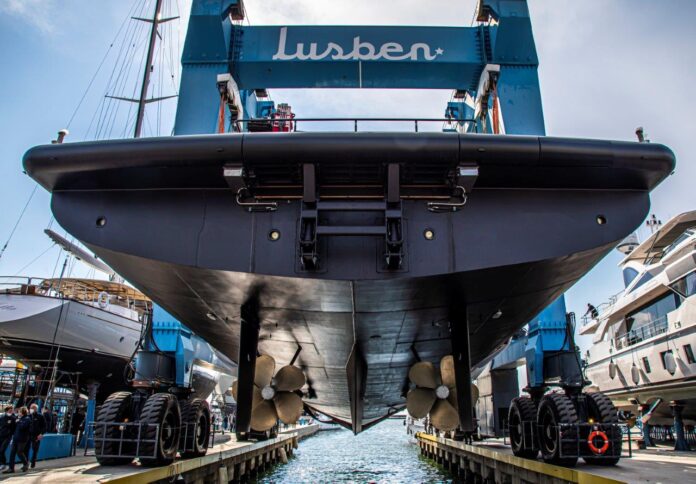 Lusben has recently completed the refit of M/Y Audace, the explorer launched from Viareggio by Cantiere delle Marche in 2019. The full-custom yacht, commissioned by Andrea Merloni, former president of Fineldo and Indesit who recently passed away, has been the subject of an overhaul by the Lusben team.

After the first season onboard, the owner was considering a series of modifications and improvements to make the yacht even better satisfy his needs and to be able to use it as a residence for most of the year. After her untimely death, the Merloni family, together with the shipyard, designer and architect, wanted to carry out all the directives given as a form of respect for the late owner.

Designed by the close collaboration of Merloni, Andrea Pezzini, CEO of Floating Life, and the architect Mauro Sculli of the studio that bears his name, Audace has been the subject of important structural work that has completely redefined her spaces and utilization. From the original 42 meters, she has grown to an overall length of 46.6 meters.

The stern has been lengthened by 2.4 meters and the bow has been made more aerodynamic and lengthened by 2.2 meters. Thanks to these changes, the strengthening of the generators and other structural improvements, the maximum speed of the yacht has increased from 15.8 to 17 knots, while consumption has been reduced by 20%.

Audace’s interiors have undergone a careful and complete overhaul as well. Two lifts were installed to facilitate movement between the decks and service to guests, and an engineered emergency staircase now connects the owner’s cabin with the lower deck.

The flooring of the owner’s deck and the upper deck has been redesigned and can now be heated, and the electrical system has been completely renovated. Finally, all the furnishings on the owner’s deck have been revised and the palette has shifted from a prevalence of light colors to darker tones, which make the rooms feel even more refined.

Like the interior, the exterior of Audace has been refitted. The stern platform has seen a total makeover of the teak and a robotic telescopic gangway has been installed, with an extension of 8 meters. The yacht was designed to facilitate a mainly outdoor life onboard and the large external living areas desired by Merloni, which can accommodate a banquet of 60 guests, have remained intact except for the bar areas which have been made more professional.

All the works have been designed and followed by the technical studio of Floating Life and the Satura studio.

The stops imposed by the pandemic did not impact the timetable of the work much, despite the delays in the procurement of some materials by supplier companies: the refit was completed in 16 months with full compliance to the anti-Covid measures Lusben implemented.

As evidence of the great bond and affection that surrounds this boat, at the same time as the launch, the commander Christian Cerulli, Andrea e Alberto Pezzini of Floating Life, Alberto Frulla of Satura’s Studio and the Lusben staff and all the workers involved in the refit of Audace took part in a ceremony in the owner’s memory, accompanied by the sound of the sirens of all boats in the marina.

In early May, the yacht will sail directly to the Balearic Islands, Spain, where the late owner spent his holidays and another ceremony will be held in his honor.