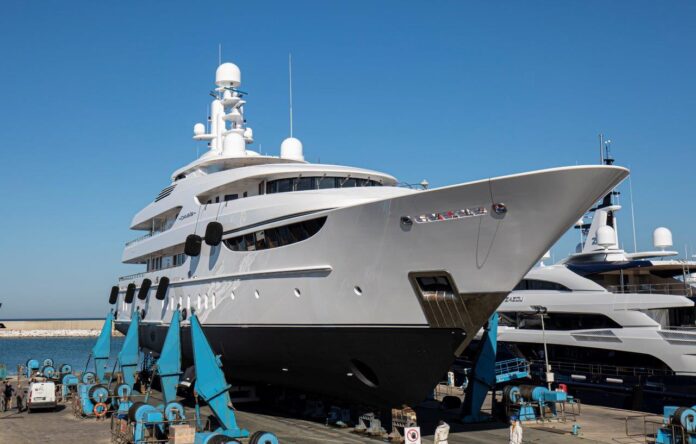 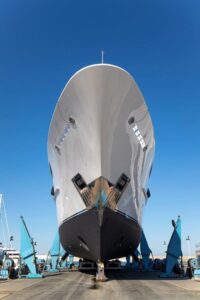 The refit of M/Y “Oasis”, the 60-meter steel and aluminum yacht built by Lürssen Yachts in 2006, has just been completed at the Lusben shipyard in Livorno. The superyacht, completely repainted and returned to its owner ahead of schedule, is now ready for the summer season.

Since October 2020, Lusben has been working on M/Y “Oasis”, an imposing 60-meter superyacht, built by the German shipyard Lürssen Yachts in 2006. To the great satisfaction of all parties involved, the refit concluded at the end of April 2021, eight days ahead of schedule.

The refit operations involved the renewing of the class and, most intensive, the total repainting of the entire yacht. The latter activity, which called for precise and accurate planning, concerned a total area of ​​about 2,300 square meters. Lusben finished the work eight days early, thanks to the shipyard’s specialized workforce overcoming the limitations imposed by anti-covid regulations.

Commander Massimiliano Frazzetta, who had previously collaborated with the shipyard, commented with great enthusiasm on the result obtained. He thanked the Lusben team for their professionalism and kindness, emphasizing the climate of work, trust and familiarity with the 15 members of the “Oasis” crew.

“Lusben’s added values ​​were the strategic geographical position of the cutting-edge facilities, on which the Tuscan company relies, and compliance with the initial budget, from which the final expenditure is unlikely to deviate,” added Frazzetta. Consistent cost is an advantage that distinguishes Lusben from many competitors, and that was the deciding factor in earning this business over the four other providers to which the owner and the captain had initially turned.

The owner’s role was of fundamental importance: his total trust in the Commander has favored the creation of a humane, serene and constructive environment.