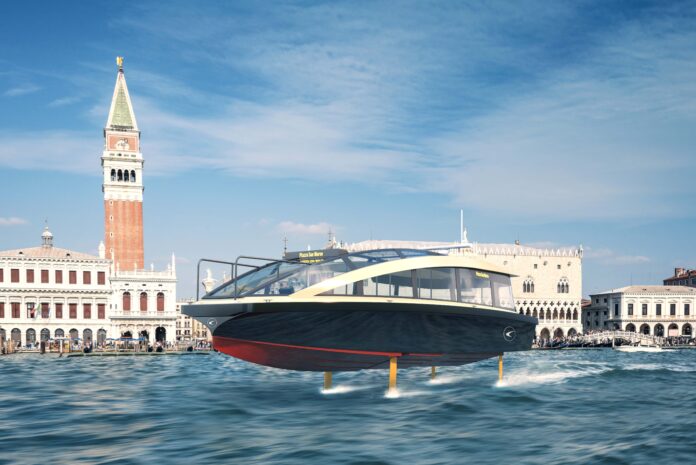 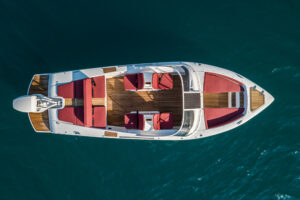 Venice faces a difficult choice between using fast motorboats on the canals and protecting the city’s iconic cultural heritage. Venice has a unique traffic system where the primary means of transportation is boats. This, however, does not exempt the city from traffic-related noise pollution and congestion.

Unique to Venice, though, is ”Moto Ondoso”, wake pollution, which has already caused damage to 60% of the city’s buildings, according to one study.

The greatest culprits are water taxis and tourist boats. As they pass through the narrow canals, they generate wake which washes against canal walls and foundations with great energy, speeding up erosion and eventually leading to building collapse.

Most motorboat engines lack the sophisticated catalytic converters found in cars, and therefore spew out nitrogen oxides and particulate matter. The acid nature of the pollution is thought to be speeding up the erosion of the city’s medieval buildings, which are already sinking into the lagoon – a process hastened by the constant currents caused by the large number of vessels passing through the canals.

A hope for the city

During the past year, Venice’s usually dark waterways have turned noticeably clearer because of the absence of motorboat traffic.

And hopefully they can stay clear – or at least this is the vision laid forth by Candela, a Swedish tech company that will demonstrate their flying electric boats during the Salone di Nautica in Venice, starting on May 29.

Candela’s boats run on hydrofoils, computer-controlled underwater wings, that lift the hull above the water and decrease water friction by 80 percent compared to conventional taxi boats. Using very little energy and traveling silently, Candela’s leisure boat C-7 produces a wake that is less than 5 cm high – or about the size of wake generated by Venice’s traditional rowing boats. 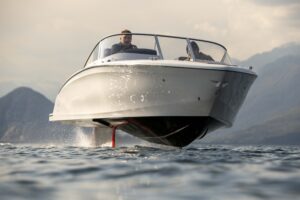 Hydrofoils are the next-generation technology for motorboats. They allow you to go fast on battery power without wake, noise or slamming, says Erik Eklund, Director of Public Transport at Candela.

The hydrofoils give the C-7 several advantages not found in other boats, be it electric or combustion engine craft.

C-7 can cruise at high speeds for well over 2 hours at a speed of 20 knots, far longer than any other electric boat. The boat flies over choppy waves rather than pounding through them, resulting in superior comfort for its passengers.

“With C-7, we wanted to build the first no-compromise electric boat. It can go fast and far, like combustion engine boats. But it’s also totally silent, much smoother to ride in, fun to drive, doesn’t create wake and is very economical to drive – it’s about 99 percent cheaper to operate than a gasoline boat of the same size” says Erik Eklund.

Just like a modern airplane, the C-7’s hydrofoils are controlled by computers that adjust the angle of attack continuously. The foil moves 100 times per second to balance the boat, resulting in an artificially stable ride even in strong winds and bigger waves.

Building on their leisure boat technology, Candela is also developing a bigger, passenger boat which is called the P-30. This 30 passenger commuter ship is currently under construction in Stockholm, where it will run in commercial traffic from 2023 and onwards.

“Imagine a future Venice where waterborne transport is not only emission-free, silent, and doesn’t damage the city’s iconic buildings, but also very cheap to operate and can provide a new, fantastic experience for tourists and locals alike. That’s what we hope to accomplish with P-30” added Erik Eklund. “We will show that electric boats can be far better than the fossil fuel competitors – but still be kind to nature“.

Candela will bring the C-7 to Salone di Nautica in Venice for test drives. The grand finale will be the show’s E Regatta, an endurance competition between electric boats.