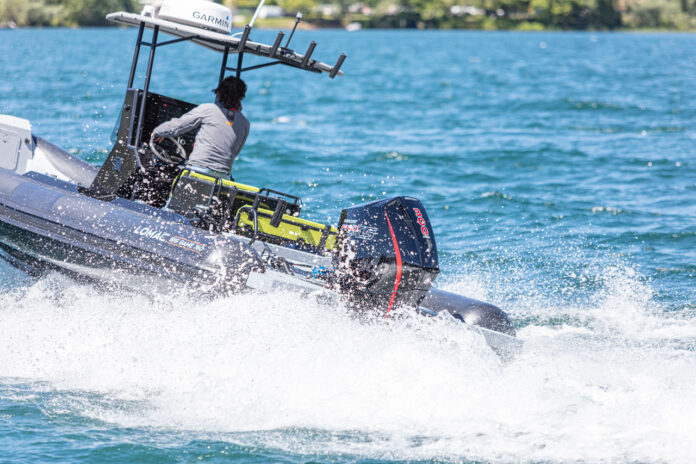 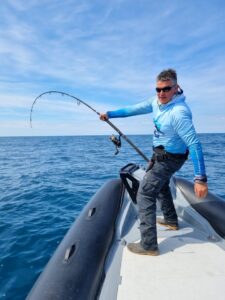 Lomac relaunches its fishing range in style! BIG GAME 760, 600 and 540 are the first inflatable boats on the market designed to cater for all three main fishing techniques: trolling, drifting and spinning.

But that’s not all, when not used for fishing, the boat’s new interior layout is designed so that it can be quickly transformed into a recreational craft to enjoy on day trips in the summer months.

To develop the project, the Milan-based shipyard headed by Paolo and Fabrizio Lo Manto brought in experienced fisherman Diego Bedetti, a well-known professional with expertise across the board in sea fishing techniques, who has created a boat designed to meet the real needs of its users.

BIG GAME 760 has an overall length of 7.68 meters, a beam of 3.04 metres and an empty weight of 1,800 kilogrammes. The hull is divided into areas, each designed to cater for a particular fishing technique. The modular design makes it possible to arrange fishing gear as required: the bow area is designed primarily for spinning enthusiasts, the central area for trolling, and the entire stern area for those who prefer drifting or bottom fishing.

Each area is fitted with specially designed rod holders and multiple steel handrails, essential when learning, as well as tanks and lockers.

The floorboard of the BIG GAME 760 is moulded as a single piece, making it lighter than on previous models but without affecting its strength. Underneath it is the fuel tank, with a capacity of 340 litres because fishermen often have to travel long distances to reach the right spot, and the 30-litre freshwater tank, which feeds the sink and pull-out shower.

The seat in front of the console in the bow area has a comfortable cushion and the fuel tank filling area next to it.

The boat and onboard utilities are controlled from the console, which is equipped with two Garmin GPSMAP 8416xsv units with premium widescreen multitouch displays. This powerful and fully integrated system has a 16-inch ultra-clear full HD touchscreen, with an integrated dual-channel 1 kW CHIRP echosounder featuring the most advanced echosounding functionality available on the market, including ClearVü and SideVü.

The GPSMAP 8416 has a high-performance processor for fast map display and to personalise the screens, data and indicators. Every component is designed to give users rapid access to all the information they need in any situation. 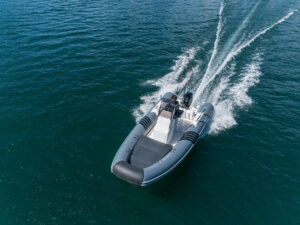 BIG GAME 760 also has a black-painted steel TTop with rod holders and supports for the radar system and VHF and GPS antennas. On board, another must is an advanced audio system, either for listening to music when on outings with family and friends, or for fishing using low frequency vibrations.

The Fusion sound system consists of a stereo, two loudspeakers in the bow plus two in the stern, a woofer forward, two tweeters on the console and an amplifier inside it.

The console is protected by a plexiglass screen that can be fully lowered or raised to provide eye protection and maximum visibility during navigation.

The bow seat is fitted with a comfortable cushion and can act both as a work surface and a functional seat, not least by providing three rod holders that leave the entire perimeter of the boat free of obstacles.

Inside the central seat is a practical livewell tank containing up to 60 litres of water. Essential for trolling enthusiasts, it is also fitted with a LED light for night fishing.

Other features of the boat

The bottom section of the seat on the forward side is fitted with a convenient locker, which can also contain a chemical WC if needed.

Moving aft, the fibreglass moulding rises vertically to create the base on which the seat for up to three passengers is fixed (with six rod holders mounted on the back rest). The seat has a comfortable cushion and can be lowered out of the way to maximize the space available.

On either side of the engine are two generous platforms that provide easy access to the propulsion system and a practical way to enter the water, with a convenient ladder stored under the platform, completely out of sight.

The boat is powered by a 4.6-litre Mercury PRO XS 300 V8 four-stroke engine with eight cylinders and a weight of only 229 kg. This version of the Mercury V8 uses Transient Spark Technology to deliver even faster acceleration and has an aggressive graphic design that reflects the engine’s performance.

The transom is wide enough to mount a twin-engine propulsion system or alternatively, as in the case of this model, an additional auxiliary engine that can be operated directly from the helm station through a coupling rod. The boat is also fitted with the intuitive Active Trim system patented by Mercury, which uses GPS to monitor the trim of the boat and automatically make adjustments based on speed and engine rpm.

Vessel View Mobile is included as standard with the engine and consists of a “plug and play” module and an app downloaded to a mobile device.  The module connects to a mobile device over Bluetooth to display engine parameters and other information.

The BIG GAME 760 is a real gem of boat for fishing, as well as being safe and comfortable for recreational use. Together with its smaller brothers, the 540 and the 600 (both fitted with 40 HP engines), it forms part of a versatile range with a layout that can be tailored to meet the specific needs of every buyer.