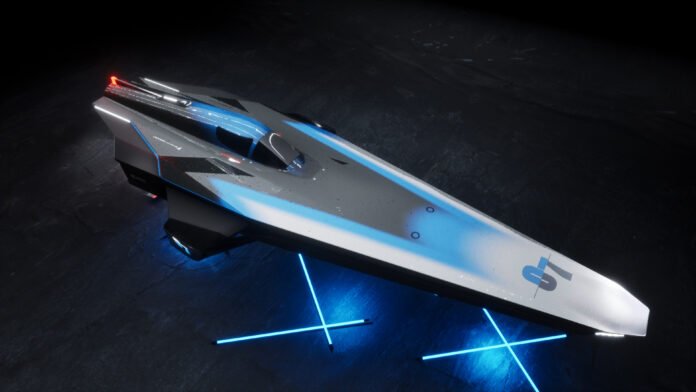 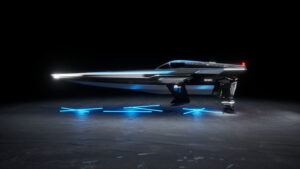 Series creators Alejandro Agag, Chairman of E1, and Rodi Basso, CEO of E1, were both joined live in the studio by the President of the Union Internationale Motonautique (UIM) Raffaele Chiulli, as well as SeaBird Technologies Founder Sophi Horne, and Founder & CEO of Victory Marine Brunello Acampora.

To watch the event in full, visit the E1 Series YouTube channel.

The vessel is a completely new design and was co-created by Horne and Acampora following an extensive validation process. The RaceBird is inspired by nature and birds hovering above the water and features an outboard motor, enclosed safety canopy and hydrofoil technology.

Using this innovative technology, the electric RaceBird powerboats will rise above the water’s surface, allowing for minimum drag and maximum energy efficiency. Being lifted above the waves will not only improve performance, but also promote close and competitive racing with a reduced wake when following an opponent.

The RaceBird is specially designed for foil-to-foil racing and is capable of reaching speeds up to 50 knots (93 km/h or 58 mph), with pilots showcasing their skills using tight and technical circuits located close to shore in the heart of urban areas and alongside the Extreme E events around the planet.

With the design now validated, the RaceBird has entered into the production phase with the expert engineers at Victory Marine concentrating their efforts and resources over the coming months on manufacturing a full fleet of race-ready electric powerboats. 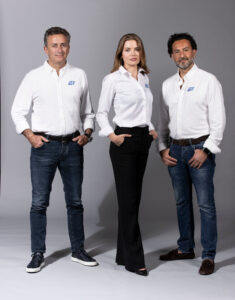 “With the new design of the RaceBird powerboat you see today, we hope to accelerate change in the marine industry and provide sustainable solutions for future leisure craft. The new powerboat that Sophi [Horne] and Brunello [Acampora] designed looks like a spaceship. I’ve compared electric racing cars to podracers from Star Wars in the past, but the RaceBird looks even more futuristic. We’re looking forward to ushering in a new era of electric powerboat racing.”

“With my engineer hat on, the RaceBird presents a unique challenge and one that the teams at SeaBird Technologies and Victory Marine have delivered on. They’ve managed to develop an innovative powerboat with an eye-catching design and also factored in practical solutions ready to go racing. Shortly we’ll also be announcing our powertrain and electronics partners, so we’re still on schedule to hit the water soon.”

“It’s amazing to finally be able to share the new RaceBird design with the world. Obviously, I’ve seen it on a screen quite a lot in the past few months! But it’s great to show the new look of the boat that the pilots will race with. The bodywork and shape of the vessel is inspired by nature and birds flying above the water’s surface. What has been interesting is trying to find a balance between how you envisage the design and combining that with optimising both performance and efficiency. The solution we settled on fortunately doesn’t compromise on either the looks or performance capabilities.”

Statement of Victory Marine and UIM

“Today’s announcement is the result of many months of hard work, creating a completely new design and simulating it in a competitive racing environment. I’ve really enjoyed working together with Sophi to produce the vessel that will compete in the world’s first electric powerboat championship.

Now that the design has been fully validated, we’ll begin engineering and manufacturing the boats in preparation for prototype testing and ready for the teams to receive their first delivery. For us at Victory Marine, the E1 Series is the greatest test bench for cutting-edge solutions that will change the future of navigation forever.”

“At the International Powerboat Federation, we’re delighted to be part of this ground-breaking development in the powerboating sport. The futuristic RaceBird design combined with the use of hydrofoil technology in the E1 Series reflects the pioneering spirit of this initiative, and are an inspiring answer to today’s challenges facing marine mobility. It’s an exciting moment for our sport and I can’t wait to see the RaceBird on the water.”

Released ahead of World Oceans Day, the RaceBird acts as a symbol of the future ambitions of the E1 Series, to revolutionise marine mobility and reduce the pressures being placed on fragile underwater ecosystems around the world.

The next major milestone to look out for in the RaceBird development is in September when the covers come off the first full-scale model at the Monaco Yacht Show, before the start of prototype testing which is set to get underway in winter later this year.

During the digital reveal of the RaceBird design, Agag also confirmed that the E1 Series has secured investment from the Public Investment Fund (PIF).

The partnership represents a significant step forward in the long-term development of the championship, providing a strong foundation on which to build from and enabling the series to further accelerate preparations for the inaugural season, scheduled to take place in early 2023.