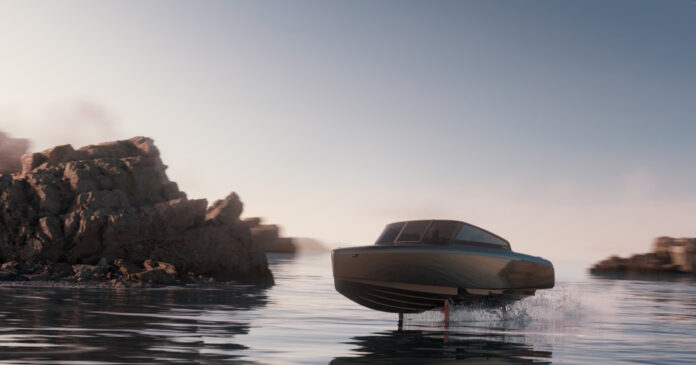 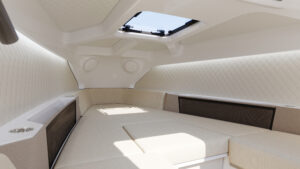 Building on its first, successful sports craft, the Candela C-7, the Swedish tech company is now launching its second-generation hydrofoiling leisure boat: the Candela C-8, a larger and more comfortable craft designed to bring electric boats to the wider market.

“With the C-7, we demonstrated that our hydrofoil technology not only allows for long range on electricity, but also provides a better experience than conventional boats. In a hydrofoil boat, you get a smoother, nicer ride. However, the C-7 was more like a hand-built sports car; never intended for volume production” says Gustav Hasselskog, Candela’s founder and CEO.

“With the new C-8, we’re pushing the technology to the next level, and at the same time focusing on making a boat that has all the comfort you would expect, while designing it for efficient mass production“.

At 8,5 meters length, the C-8 features all the amenities anticipated in a premium cruiser: a large, comfortable cockpit with seating for eight persons, a big sunbed, a spacious front cabin equipped with beds for two adults and two kids, and a marine toilet. 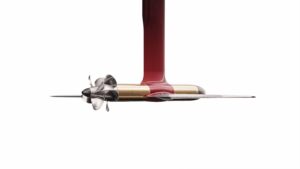 Once purchased, the C-8 is virtually free to own and use. Thanks to the company’s efficient hydrofoil system, the cost of driving Candela C-8 is 95% lower than for combustion engine boats.

Equipped with the newly launched Candela C-POD direct-drive pod motor, the C-8 requires neither oil changes nor regular maintenance. The C-Pod is rated for 3.000 hours service-free use, which is the equivalent to 50-100 years of recreational boating – without any maintenance whatsoever.

When moored, the C-8’s hydrofoils can be retracted above the waterline, minimizing growth and the need for antifouling.

Combined with Candela’s newly developed drive train, the C-POD, the C-8 can cruise for very long distances: over 50 nautical miles on battery power at a speed of 22 knots.

The C-POD makes also the C-8 an efficient powerboat: at a speed of 22 knots, it only draws 16 kW/21 hp from the battery. For comparison, a conventional, planing, 28-foot cabin cruiser is typically equipped with a 300-horsepower gasoline outboard motor.

Candela C-8 is designed to be the first totally silent motorboat. Unlike other motorboats, there’s no transmission noise and no sound from waves hitting the hull. Only the faint whisper of the wind will remind you that you’re cruising at a speed of 30 knots.

The C-8’s Flight controller automatically and instantly adjust the foils to keep the boat level and steady, even in adverse weather conditions. In an industry-first for leisure boats, the C-8 is equipped with true fly-by-wire steering and has Autopilot features for more relaxed driving over long distances. When the driver lets go of the wheel, the boat will automatically steer the set compass course. More features will follow as the C-8, like every Candela, is upgradeable Over-The-Air.

“With all learnings from C-7, a new, even more efficient foil system has been developed for C-8. A planing boat has a lift to drag ratio of 4, a seagull is at 10 and an albatross, with its long sleek wings at 20. C-7 reached 15. With quite some re-thinking, C-8 ended up at 17, making it the most efficient boat ever.

Maybe even more important, we put a lot of effort into understanding how to translate the feeling of a very tight driving experience into mechanics, electronics and software. To shorten the system’s reaction times we developed our own height sensors. Also, we have taken out the mechanical play of the entire system. In terms of driving experience, it is a world of a difference – the boat reacts to changes in the steering wheel within a split second.

Take-off is where we use the most energy, so equipping a foiling boat with a really good planing hull actually makes sense. I think we have pushed the hull performance as far as is possible” says Gustav Hasselskog.

The Candela engineering team has also spent considerable effort on optimizing the C-8’s hull. Using advanced CFD, the C-8’s stepped hull is designed to use very little energy from standstill up until 16 knots, which is when the boat becomes foilborne. 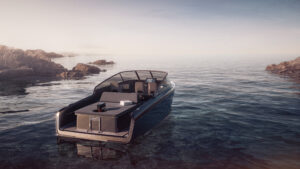 All sub-systems and software in C-8 are developed in house, making for a seamless human-machine interaction.

All settings – from turning on the cooler to navigation – are controlled from the 15,4” inch screen running Candela’s proprietary user interface. The Candela app lets the owner control the boat’s various systems from ashore.

“Making an integrated user experience was really important for us. We don’t rely on third party suppliers for software and we make most hardware ourselves. This may be the Iphone moment for boats” says Gustav Hasselskog.

Boosted by large investments from the TED foundation’s Chris Anderson among others, Candela has been able to scale up R&D at an exponential rate over the past two years. The C-8 project was initiated to finally bring electric boats to the masses.

“We believe we will make several thousand Candela C-8’s over the coming years” says Gustav Hasselskog. Once you have tried it, you realise that this is the way boats must look like in the future.

Candela C-8 production starts this fall at the company’s Stockholm factory, and the first customers will take delivery during spring 2022.