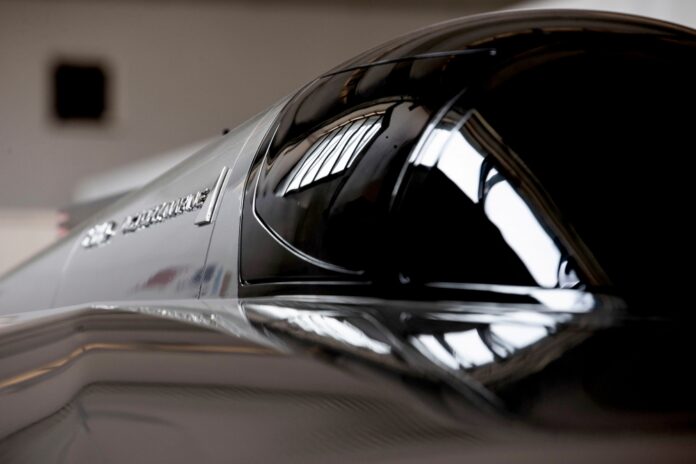 The RaceBird was revealed during a presentation ceremony hosted at the Yacht Club de Monaco, where E1 Series co-founders Alejandro Agag and Rodi Basso were joined by the boat’s designer Sophi Horne (Founder of SeaBird Technologies), Brunello Acampora (Founder & CEO of Victory Marine), and UIM President Raffaele Chiulli to remove the covers from the revolutionary new vessel.

Just a step from the prototype

Only one year on from the series launch, the unveiling of the full-scale model marks a major milestone for the championship as the E1 Series moves closer to putting the RaceBird on the water and the start of prototype testing early next year.

Earlier this year, the Public Investment Fund (PIF) entered as an investor in the E1 Series. The partnership with the PIF represents a significant step forward in the long-term development of the series, and provides a strong foundation to accelerate the development of the RaceBird technology.

Mercury Racing will work closely together with SeaBird Technologies and Victory Marine to support with the development of the outboard motor for the RaceBird. Navico is coming on board as a partner to provide specialist navigation and marine electronics for the RaceBirds and support craft at race events, integrating Simrad’s latest technology into the cockpits and C-MAP’s digital cartography and mapping technology for teams and race management.

In the coming months the RaceBird engineers will focus on the integration of the battery and controls systems and how they work together with the powertrain. After which the engineers will incorporate the propulsion architecture to the platform ready to hit the water.

As well as providing an update on the technical roadmap for the RaceBird powerboat, it was also confirmed during today’s event that Monaco will host a race in the inaugural season of the E1 Series, which is scheduled to start in early 2023.

E1 Series organisers are in discussions with the relevant authorities in Monaco to finalise the course layout, with the pilots set to race using a circuit combining sections inside Port Hercule and outside the harbour walls along the Mediterranean shoreline.

The E1 Series is also in conversation with a number of candidate host cities around the world, with feasibility studies set to commence soon in major European cities, including in Rotterdam and several sites in Hungary.

Working together with the Port of Rotterdam, the championship is looking to incorporate the race event as part of the annual World Port Days festival. While in Hungary, the E1 Series is evaluating potential course locations, which includes a race on the Danube River in front of the Hungarian Parliament Building.

To round-up the evening’s activities, the world governing body for powerboating announced that Prince Albert II of Monaco is to become Honorary President of the Union Internationale Motonautique (UIM).

Statements about the E1 Series

“Seeing the full-size boat like this for the first time, it’s starting to feel like the E1 Series is coming to life. We revealed the digital designs ahead of World Oceans Day in June earlier this year, but to see the physical model is a massive step forward in terms of our preparations and shows the fans what to expect when we start racing in early 2023.

What a fabulous job the team have done to assemble the boat so quickly and special thanks must go to Sophi [Horne] and Brunello [Acampora] for creating this masterpiece. It’s also fantastic news to confirm that we’ll be racing in Monaco in the first season of the E1 Series. We appreciate the support of HSH Prince Albert II of Monaco and the Yacht Club de Monaco management committee, as well as the UIM for making it possible.”

“We were stood at this same location only one year ago to launch the championship and now we’re standing next to the powerboat that the pilots will race with in the E1 Series. There’s been a lot of hard work going on behind the scenes, not only with the RaceBird development but also in growing the team and identifying potential host venues, partners, teams and pilots.

I’m delighted to be partnering with Mercury Racing and Navico on this electric adventure and I’m super excited to announce that Monaco will feature on the calendar for the inaugural season. We’re looking to add more races over the next few months and we’re having active conversations with more than 70 cities around the world, with positive progress being made in Rotterdam and Hungary where feasibility studies are starting soon.”

“Thank goodness, we made it! I remember I used to spend a lot of time here in Monaco for my previous job and seeing presentations of different boats and my boss would tell me: ‘you will be doing this one day’, and I never believed it. Now we’re here presenting the RaceBird and it’s a bit emotional actually seeing my design and being the one chosen and trusted to create the vessel for the E1 Series. I feel blessed and the final full-size model you see today really meets my expectations and looks really cool in the flesh.”

“In a time of giant technological changes, Victory Marine has accepted with enthusiasm this incredible opportunity to change the face of powerboating forever. I’ve personally selected the best experts to support myself and Victory Marine in turning Sophi [Horne’s] and SeaBird’s vision into an electric racer. I’m also looking forward to transferring this technology to a new breed of consumer leisure craft.”

“Mercury Racing is excited to take part in this challenge, and looks forward to joining the E1 Series, SeaBird Technologies, and Victory Marine in the development of high-performance electric powertrain components. Sustainable technology is already playing an important role in the future of marine motorsports, and we could not be prouder of our partnership with these organisations and the products that will come as a result of our combined efforts.”

“This is an exciting day for racing fans and boaters across the world to see the unveiling of the electric RaceBird powerboat that will help lead the way towards further development and technologies accelerating the electrification journey in the boating industry. We believe the E1 Series is a perfect platform to raise the bar around innovation and public interest in marine conservation and sustainability. At Navico, we’re pleased to have the Simrad and C-MAP brands be part of this process as E1 Series partners.”

“On behalf of the UIM, I feel very privileged to have seen for myself this incredible E1 boat in such an amazing setting. To be in Monaco with the full engagement of HSH Prince Albert II is a clear demonstration of how much attention the energy transition in nautical mobility deserves.

“With this new boat, we’re all one big step closer to the realisation of a very ambitious and vitally-important vision. Very ambitious because E1 is entering new territory with this first electric-propulsion powerboat racing series. Vitally important because of the role E1 will play not just in raising awareness of the climate crisis but also in leading the delivery of solutions.

“The UIM is very excited to see how partners like Mercury will take what they learn at the top of the sport and quickly apply it to the recreational market. This is the kind of tangible impact we all need for the air, the water and even the Earth.”