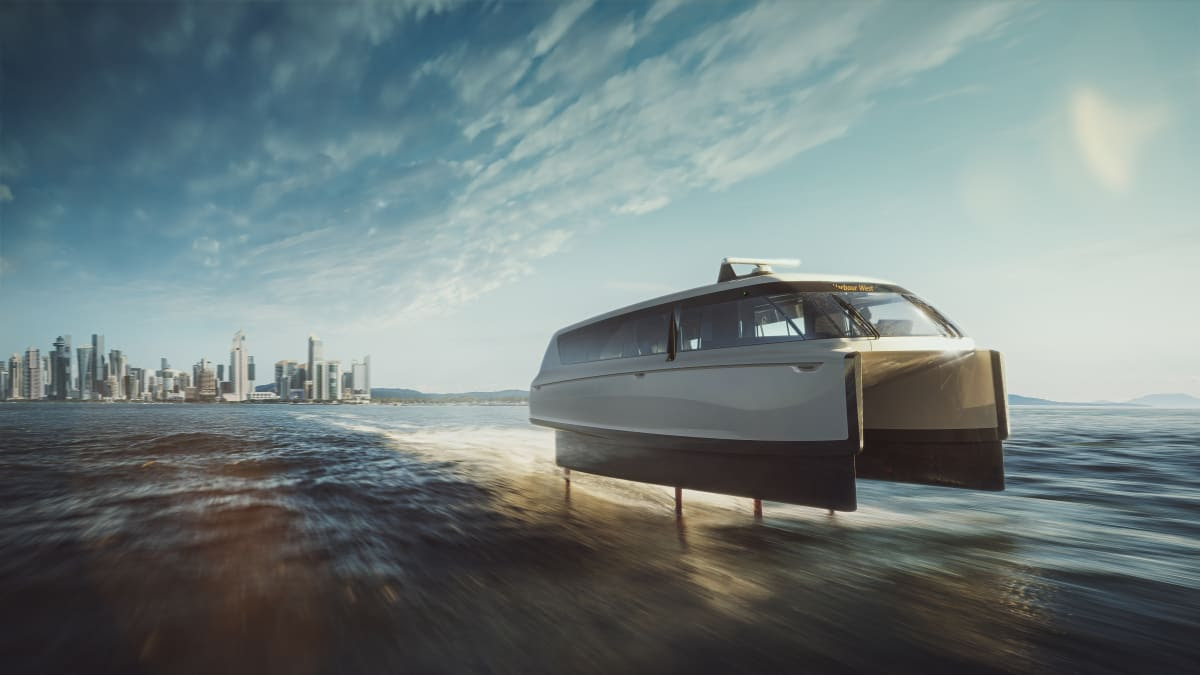 The marine technology company Candela released the first pictures of what will be the world’s fastest, longest-range and most energy efficient electric ship ever. The Candela P-12 Shuttle, as the innovative vessel is called, will be shuttling citizens between the sprawling Stockholm suburb of Ekerö and the city center in the coming year.

Flying across the water, the 30-passenger electric vessel has a speed of 30 knots – considerably faster than any other electric ship in the world. It also provides faster commuting than the subway and bus lines it competes with, as well as being infinitely more energy efficient than the diesel vessels currently servicing the same route. 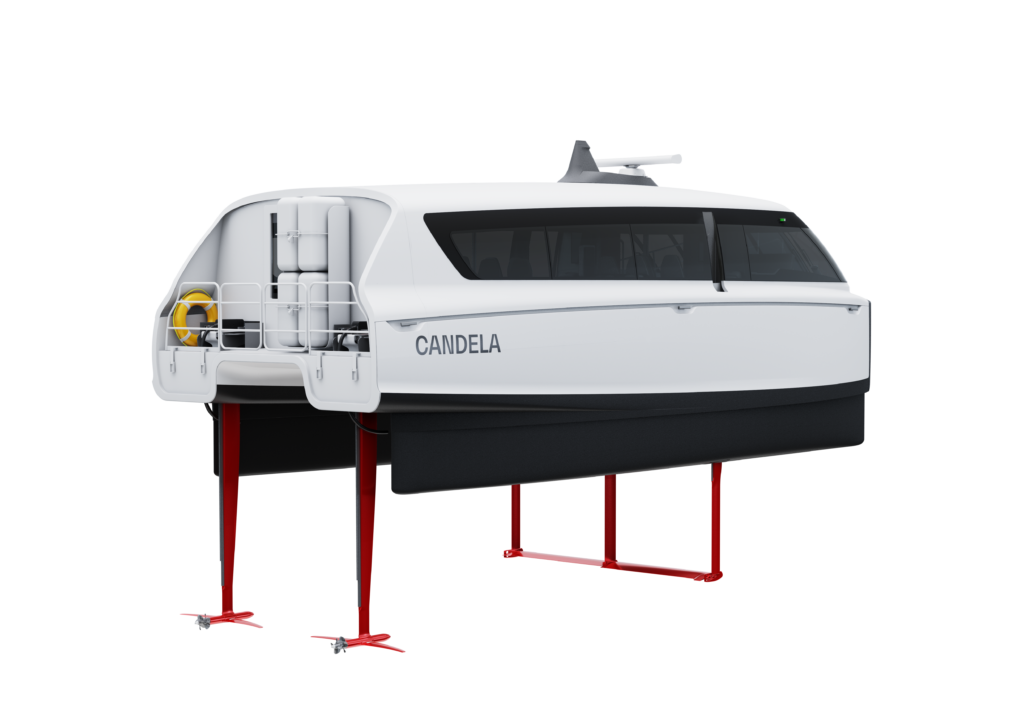 Perhaps most signficant, the ship is faster than travelling by car during rush hour.

The secret to its high speed and long range are the three carbon fiber wings that extend from under the hull. These active hydrofoils allow the ship to lift itself above the water, thus decreasing drag.

Candela’s technology reduces energy per passenger kilometer by 95% compared to current vessels, allowing for an unprecedented range of 50 nautical miles at service speed.

Using the equivalent of 0.1 kWh of electricity per passenger kilometer, the ship is more energy efficient than a hybrid electric bus. Also, with up to 200 kW DC charging, it can charge its battery in under one hour.

Most importantly, the razor-sharp carbon fiber foils will slash many commuters’ travel times in half. 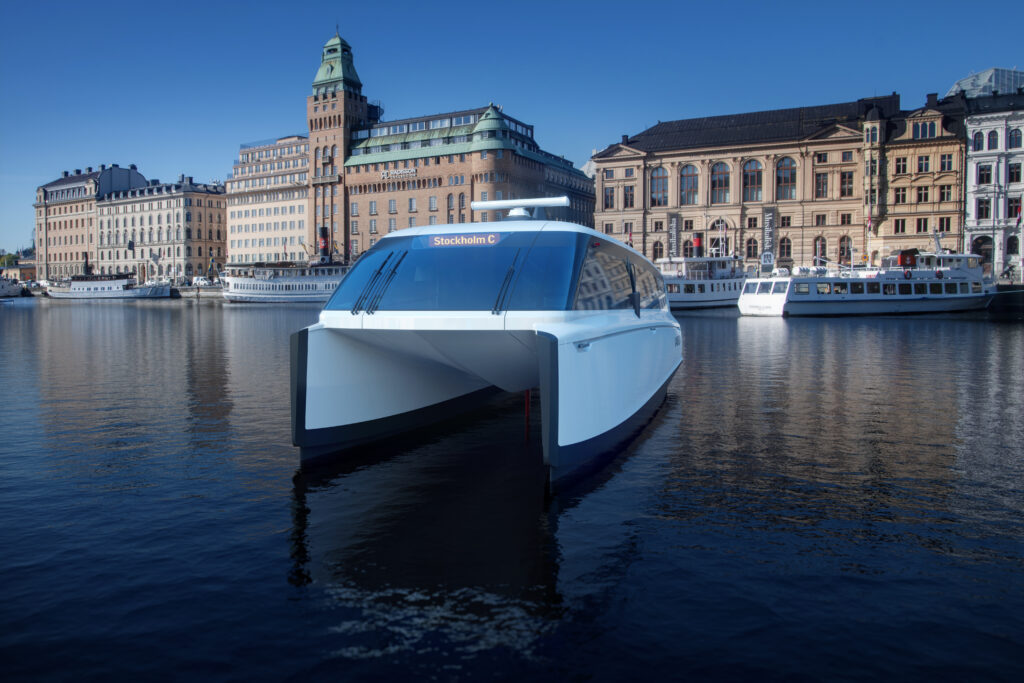 With the ability to cover even the longest routes in Stockholm at high speeds, the Candela P-12 Shuttle will be used by the to shorten the commute between the rapidly expanding Stockholm suburb of Ekerö and the city center. Currently a 55-minute trip by bus, subway, or conventional ferry (or even car during rush hour), the Candela P-12 Shuttle will cover the 15 km route in only 25 minutes – saving the commuter an average 50 minutes per day.

“This will have a huge positive impact on people’s lives – you can work one more hour or pick up your kids from school one hour earlier” says Erik Eklund, Vice President, Commercial Vessels at Candela.

As the hydrofoiling Candela P-12 Shuttle creates near zero wake, it has been granted an exemption from the 12-knot speed limit, allowing it to fly into the city center without causing wave damage to other vessels or sensitive shorelines.

In fact, the miniscule propeller wash is considerably smaller than the wake from conventional passenger ships travelling at slow speeds.

The first electric flying ferry will also elevate passenger experience to an entirely new level, thanks to the most advanced computer system found in a passenger boat. Those prone to seasickness will appreciate the extremely smooth ride in adverse weather.

Flying silently above the waves, the Candela Flight Controller – a computer which regulates the hydrofoils 100 times per second – ensures a steady, smooth ride over waves that would make many feel queasy.

“There’s no other ship that has this kind of active electronic stabilization. Flying aboard the P-12 Shuttle in rough seas will feel more like being on a modern express train than on a boat: it’s quiet, smooth and stable” says Erik Eklund.

The Region of Stockholm will operate the first P-12 Shuttle ship for a nine-month trial period during 2023. If it meets the high expectations placed on it, the hope is that the city’s fleet of over 70 diesel vessels eventually will be replaced by P-12 Shuttles – but also that land transport from congested highways can shift to the waterways.

“Maritime traffic is the region’s most popular public transport, and I want to expand it. But we need better technology to travel faster and reduce climate impact. Therefore, we are happy to try this new technology for waterborne traffic.

This project can contribute to solutions that we can use in Stockholm, but also provides opportunities for both exports and jobs in the Stockholm region” says Gustav Hemming, Vice President of the Regional Executive Board in Stockholm.

A comeback for waterborne transport

Ever since faster and cheaper steam trains started to replace expensive and slow coal-fired packet boats in the 1850’s, urban transport has come to rely on land-based vehicles – even in cities like Stockholm, San Francisco, and New York, where the waterways offer natural cross connections between regions and boroughs.

With Candela’s P-12 Shuttle, the current status quo will once again be challenged. In rush hour traffic, the ship is faster than buses and cars on many routes.

Thanks to the hydrofoil’s efficiency, it can compete on mileage costs too; and unlike new subway lines or highways, the flying electric super-ship can be inserted on new routes without massive infrastructure investments – all that is needed is a dock and electric power.

The P-12 Shuttle’s handy size – with a comfortable and airy cabin for 30 seated passengers – adds to its versatility. In Stockholm, passenger vessels have a 17% occupancy rate on average, meaning that a 300-passenger ship carries only about 50 people on most days.

Candela’s vision is to replace today’s large, predominantly diesel, ships with nimble fleets of faster and smaller P-12 Shuttles, allowing for more frequent departures and more passengers carried, at a lower cost for the operator.

On the Stockholm-Ekerö route, Candela’s proposal is to replace the current pair of 200-person diesel vessels with at least five P-12 Shuttles, which would double passenger volume potential and lower operating cost.

“Instead of two departures per day, there would be a P-12 Shuttle departing every 11 minutes. This allows commuters to ignore timetables and just go to the dock and wait for the next boat” says Erik Eklund.

Candela will be laying the carbon fiber keel for the very first Candela P-12 Shuttle at the company’s new, automated factory in Rotebro, outside Stockholm, towards the end of 2022. After initial tests, the first commuters in Stockholm will embark on the 40-foot vessel in 2023.

The first P-12 Shuttle will be followed by many more, as serial production ramps up at the company’s Rotebro factory.

Using production methods already streamlined for Candela’s leisure boat manufacturing, Candela aims to eventually spit out hundreds of P-12 Shuttles a year. The company sees a huge demand from over 600 cities, municipalities, vessel operators and urban developers that already have expressed interest in the P-12 Shuttle as a faster, cheaper, and green alternative to existing diesel ships or land transport.