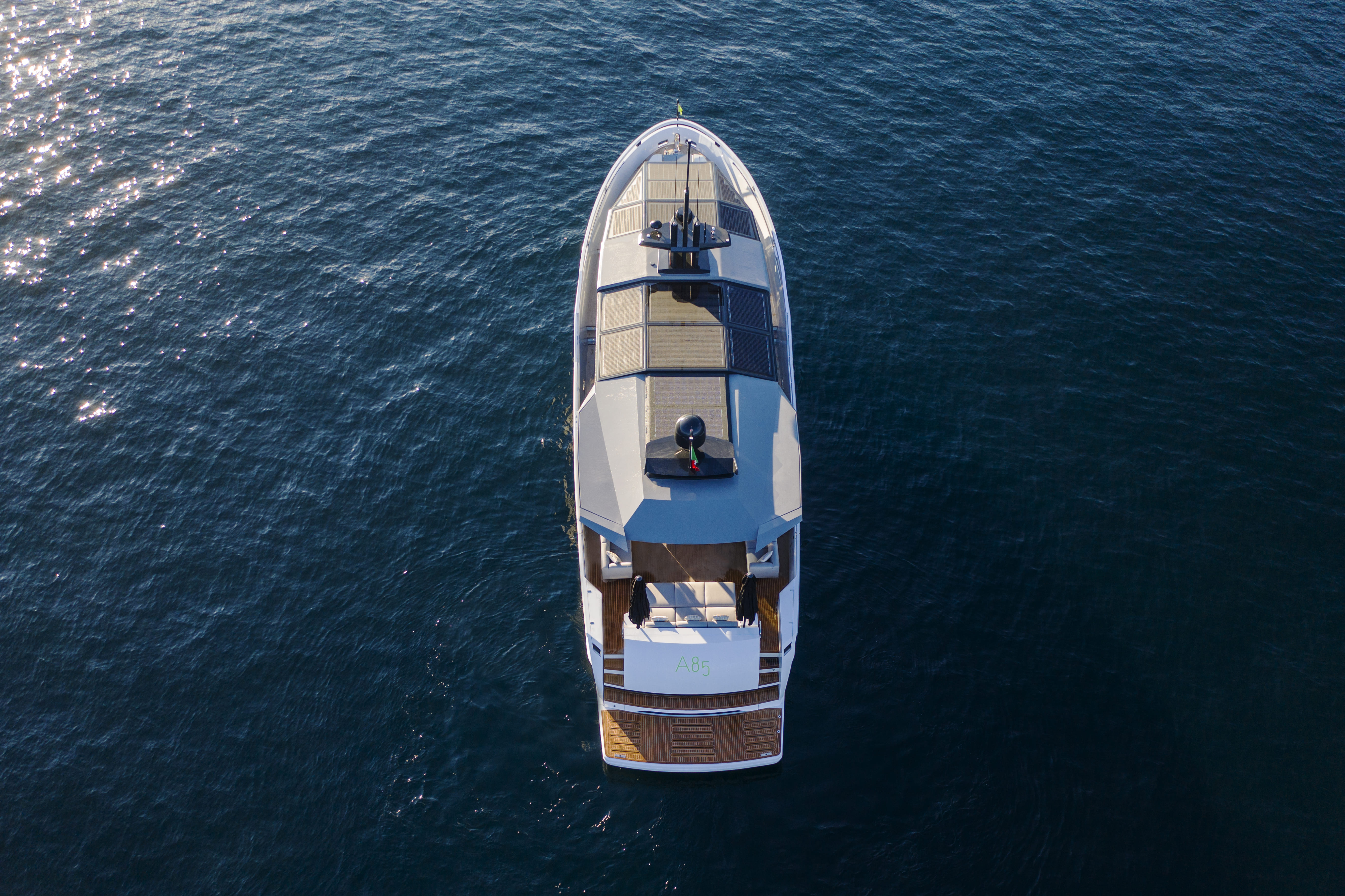 Based in the Sorrento peninsula and famed worldwide for its semi-planing yachts featuring total continuity between exterior and interior spaces, Arcadia Yachts will be taking part in the French show with its first model, the iconic A85 – soon to be joined by the A96, a new step forward on Arcadia Yachts’ roadmap to absolute innovation − and the two models in the Sherpa line.

“Cannes is a very important showcase and we’re happy to be taking part with our three most successful models, which fully reflect our construction philosophy and our idea of living on the water. We will shortly be announcing some important new developments at the Yard, in line with ongoing renewal in the sector and our brand internationalization roadmap.

We’re exploring new paths in terms of partnerships and lines, our priority being, as ever, to offer matchless onboard comfort, which has always been one of our guiding principles,” commented Ugo Pellegrino, sole director at Arcadia Yachts.

The A85, the progenitor of the yard’s entire production, is a yacht that broke the mould and became a point of reference in the industry. Its layout and the functional aspects of liveability are the result of an evolution in the Yard’s construction processes.

25.90 metres long and 7.15 metres in the beam, its distinguishing feature is the linear design of the superstructure and the plumb bow, which translate into optimum usage of both interior and exterior spaces.

The size of the living area, its simple and sober style and the harmonious interaction of interior and exterior spaces make this the yacht ideal for families or owners who want to enjoy these onboard spaces with guests and friends in close contact with nature.

The A85 will soon be joined by an exclusive new model, the A96, a yacht with a spacious master cabin in the bow and four guest cabins on the Lower Deck. The A96 builds on the strengths of the Yard’s design philosophy, such as large spaces bathed in natural light.

It will be officially unveiled next year, but during the upcoming Boat Show customers with close ties to the Yard will be able to get a preview of the first details of this extraordinary project (renderings, videos and general layouts).

Sherpa models at the boat show

Turning to the Sherpa range (named after the Himalayan guides capable of carrying extraordinary loads, whereas these yachts offer extraordinary volumes), the Yard will be showcasing the Sherpa 60 and the Sherpa 80 XL, which feature very spacious aft cockpits and beach areas as close as possible to the waterline, ideal for sharing moments of wellbeing and relaxation.

The distribution of spaces on the 18.67 metre Sherpa 60 privileges the stern cockpit, living area and cabins, in part thanks to the boat’s breadth (5.60 m). Of fundamental importance in the design of this yacht was the concept of flexibility, leading to the development of different configurations for different uses of the yacht.

The version on show at Cannes will be the Open Deck with a 2-cabin layout. This Sherpa 60 is designed for long-range cruising thanks to two Volvo Penta IPS 600 engines (options include the IPS 700 and 800), delivering a cruising speed of 17 knots and a top speed of 22 knots with the maximum engine configuration available.

Sherpa 80 XL – 24 metres long and a generous 7 metres in the beam – offers a surface area totalling 220 square metres of free interior and exterior space. This is particularly evident in the stern area because the tender garage and space for stowing the seabob and other toys is forward of the engine room, amidships, and accessed through a side hatch.

The concept of the Sherpa 80 XL is based on its deck arrangement: the bow decks are staggered to accommodate a central stairway block characterized by reduced rise heights, thus gaining space.

The direct relationship with the sea and surrounding environment is best perceived from the cockpit, which measures nearly 65 square metres and is connected directly to the stern platform by a short flight of steps.

The cockpit bulwarks are designed with openings for an unimpeded view of the panorama. The seamless relationship with nature is strongly felt in the skylounge too, thanks to the up&down windows. The upper deck has a regularly shaped 35-square-metre sunlounge that lends itself to customization. The design of the interiors is characterized by sophisticated furnishings in an ambience of elegant simplicity.

The Sherpa 80 XL can be configured with three, four or five cabins. The unit at Cannes has four cabins, with a layout guaranteeing a level of privacy typical of larger sized yachts (thanks to passageways reserved for crew only).

Top speed with the two optional Volvo Penta IPS 1350 engines is over 23 knots, while the range at 10 knots is more than 1,200 nautical miles. On this unit it will be possible to admire the new “JARDIN D’HIVER” layout option, which enables the aft deck dining zone to be closed off and heated for enhanced comfort in winter or bad weather.

Arcadia Yachts will be at Cannes Yachting Festival from 6 to 11 September, Ponton Jaes 5