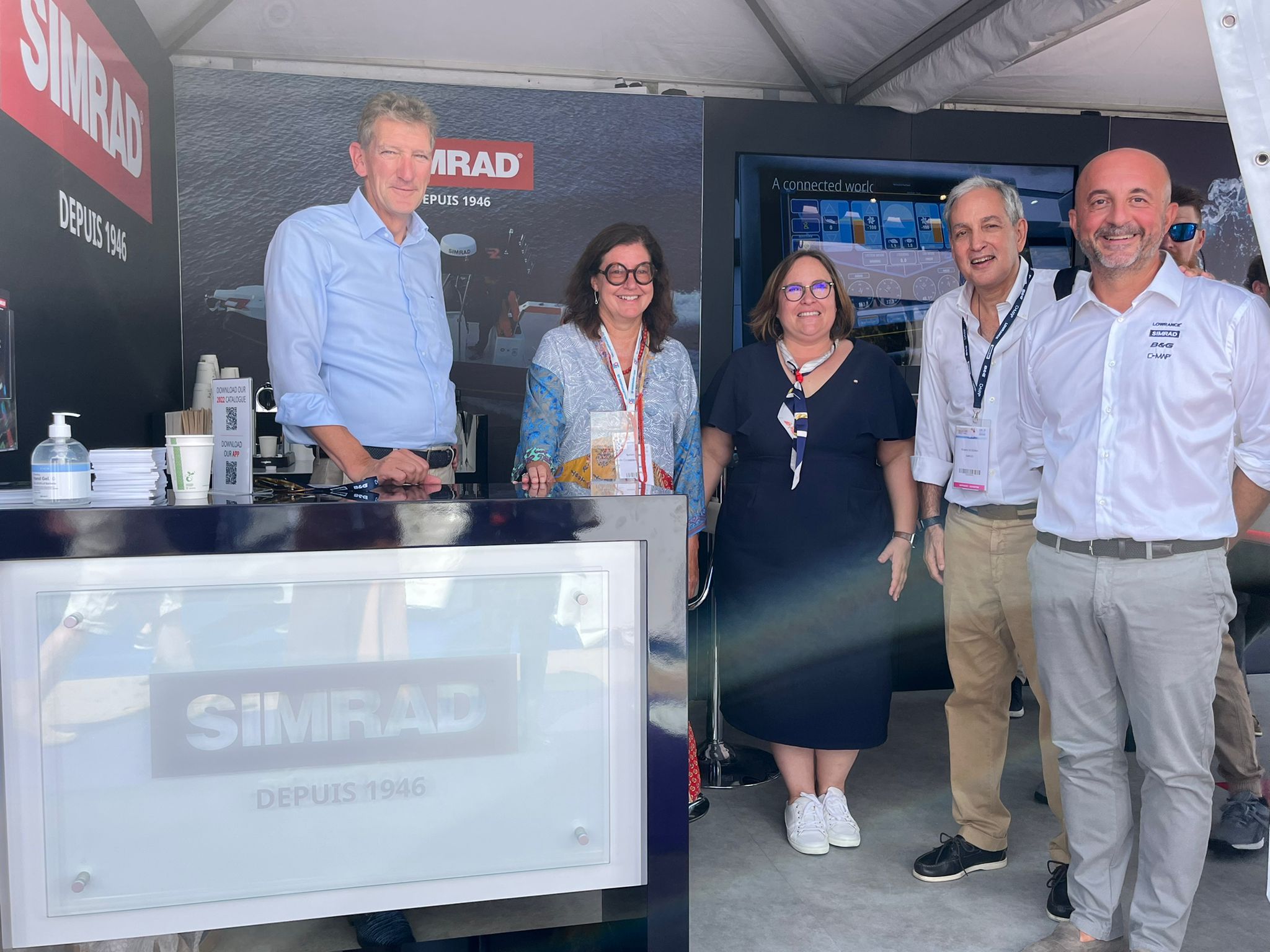 Simrad and Amer Yachts celebrated together at the Cannes Yachting Festival after Green Assistant won this prestigious award at the Monaco Energy Boat Challenge 2022, the major event held last July in the principality of Monaco at which Amer Yachts was an exhibitor.

During the show, Permare Group CEO Barbera Amerio was presented with the Coup de Coer, a special award made by the jury to highlight how a virtuous relationship between a boatbuilder and its suppliers can deliver important achievements in terms of sustainability.

Particular interest was shown in the Green Assistant project developed by the yard with Simrad Yachting, which uses the sophisticated electronic platform Command to create integrated solutions that help the captain navigate in the most environmentally sustainable way possible.

Jérémie Lagarrigue, Head of the International Jury said: “With this award, the jury wanted to underline the importance of being united around a common project to preserve the environment and Simrad Solution was the most representative of this reflexion”.

It uses data connectivity to suggest action that is necessary, or at least advisable, in terms of position information, the state of the boat and the operations the captain intends to perform.

The use of Green Assistant, which caught the eye of the jury and Prince Alberto of Monaco himself during their visit to the Amer Yachts stand, is linked to the problem of wastewater discharge near the coast, an important issue not only for the Principality of Monaco but also elsewhere. 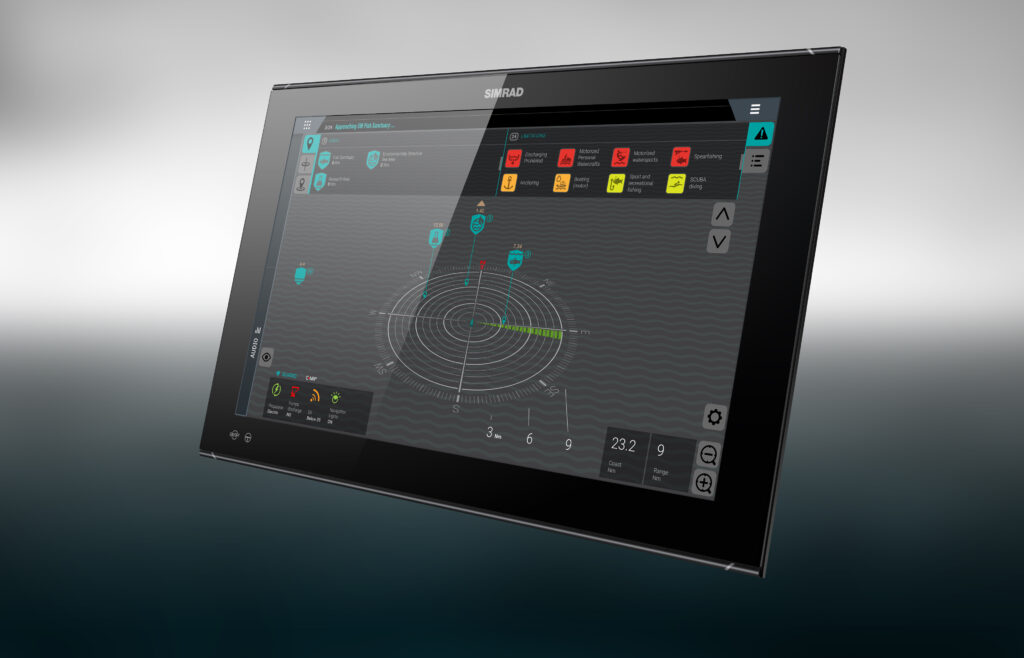 This system can automatically deactivate the pumps if the captain tries to discharge wastewater in areas where this is prohibited. C-Map cartography, combined with electronics and information technology, becomes a vital tool to comply with the law, such as when cruising in marine protected areas or along a jagged coastline where judging the distance from it can be difficult.

But because of the Command platform’s integration with the cartography, the system can also do much more, such as reducing speed automatically if the boat is in an area with a limit, like a marine park, the entrance to a port, or an area where whales have been sighted.

If the system detects that the generators are on and the boat is cruising at speed, it advises the captain with corrective action, and likewise if the boat is very noisy in a protected area (because of the engines or the stereo system, for example).

All the data collected can be stored and made available not only to update the cartography, but also the databases of universities and researchers, such as those used to study whale routes and sightings. 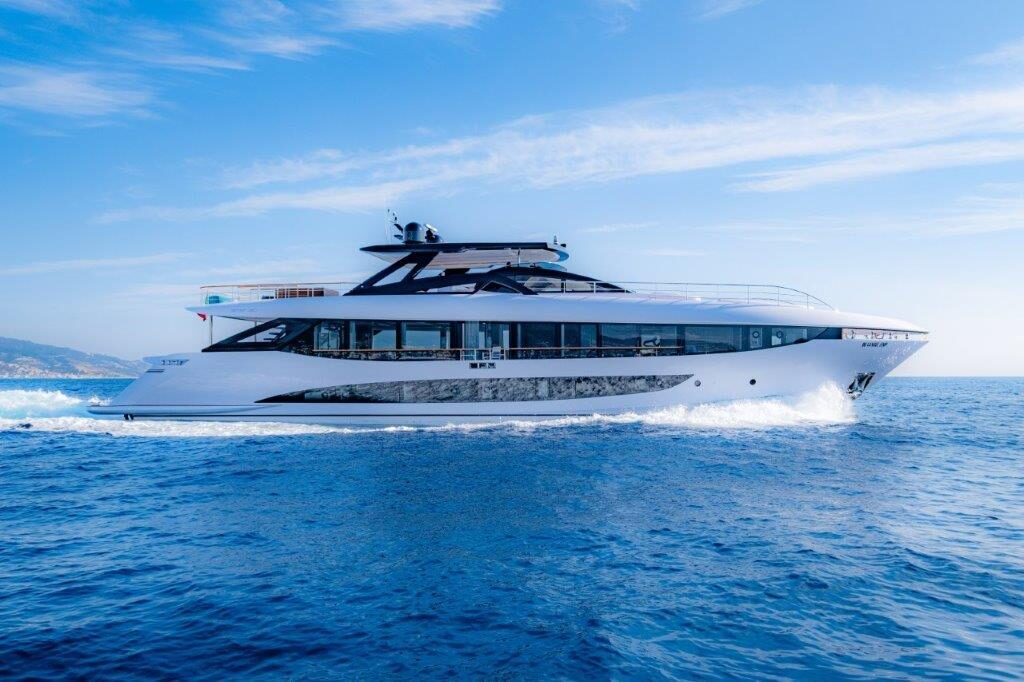 Barbera Amerio said: “This initiative demonstrates how virtuous collaboration between yard and supplier can become a model to emulate and represent a paradigm shift: we have demonstrated that every single action can contribute to achieving ESG (Environmental, Social, Governance) objectives.

I am very pleased to have been the first to believe in this project and to see Simrad implement it on our yachts. It demonstrates that a simple idea can become reality thanks to an exceptional partner with great sensitivity and motivation”.

In addition to the cup, the award consisted of a cheque for 2,000 euros, which the winners donated to the Prince Albert II of Monaco Foundation.

“The philosophy driving the Prince Albert II of Monaco Foundation, which promotes the relationship between nature and innovation, is a perfect fit for the heritage and know-how of Simrad, which has served owners who love and respect the sea right from the outset.

Donating the prize to the foundation was a gesture of continuity and closeness between two businesses that are different but share the same long-term vision,” said Roberto Sesenna, General Manager of Simrad Yachting.