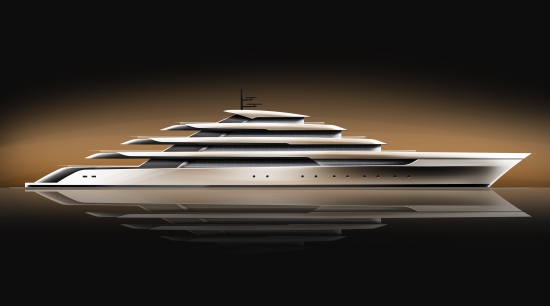 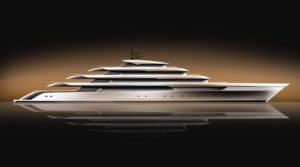 Dutch design studio Mulder Design revealed their latest project, a modern and elegant  115m displacement motoryacht, at the past edition of the Monaco Yacht Show.
The new 115m concept perfectly represents a further evolution of Mulder Design’s signature. Exterior lines draw a powerful forward-leaning profile, impressive from every angle. Style was modeled over the predetermined volume, so that these two crucial factors match in an ideal balance.
Key elements of the design are all about the layout: the yacht will have its own helicopter landing platform on the forward deck, with a dedicated helicopter garage in the deck below. Long distance crossings are thus allowed without leaving the helicopter ashore. At the other end of the yacht will be a spacious beach lounge at the stern, and this results in an expansive area filled by natural light from the skylight at the bottom of the swimming pool above placed on main deck aft. All is designed to provide a calm and serene environment where relaxation is assured.
Since the beginning of the studio activity in 1979, over 600 Mulder Designed yachts have been build: starting from designing mostly commercial vessels, Mulder Design became world renowned as high speed yachts designer after the launches of Octopussy, Moonraker, and The World Is Not Enough speed yachts. Semi and full displacement luxury yachts up to 75 meter are also part of the studio’s portfolio.
What is most impressive about Mulder Design is that it is always involved in the entire process from the first conceptual design, through naval architecture, structural design and engineering, examining many other aspects such as weight savings and the efficiency and optimisation of overall performance,  to the final sea trials and hand-over by the shipyard. Mulder better explains its vision: “There is a clear desire among owners for more energy-efficient yachts. In our latest designs we have worked very hard on ensuring that the twin pillars of speed and comfort could be aligned with an impressive degree of efficiency when cruising long distances. The evolution of our high speed cruising hull design can be combined with hybrid technology to optimise performance in every way.”
Some of the studio’s projects are currently being built by international shipyards, such as Sunrise Yachts in Turkey, currently constructing the 70m project Zenith, and Benetti67.5m building project Spectre. All such superyacht projects feature Mulder Design naval architecture and each is being build with a characteristic high speed cruising hull form.