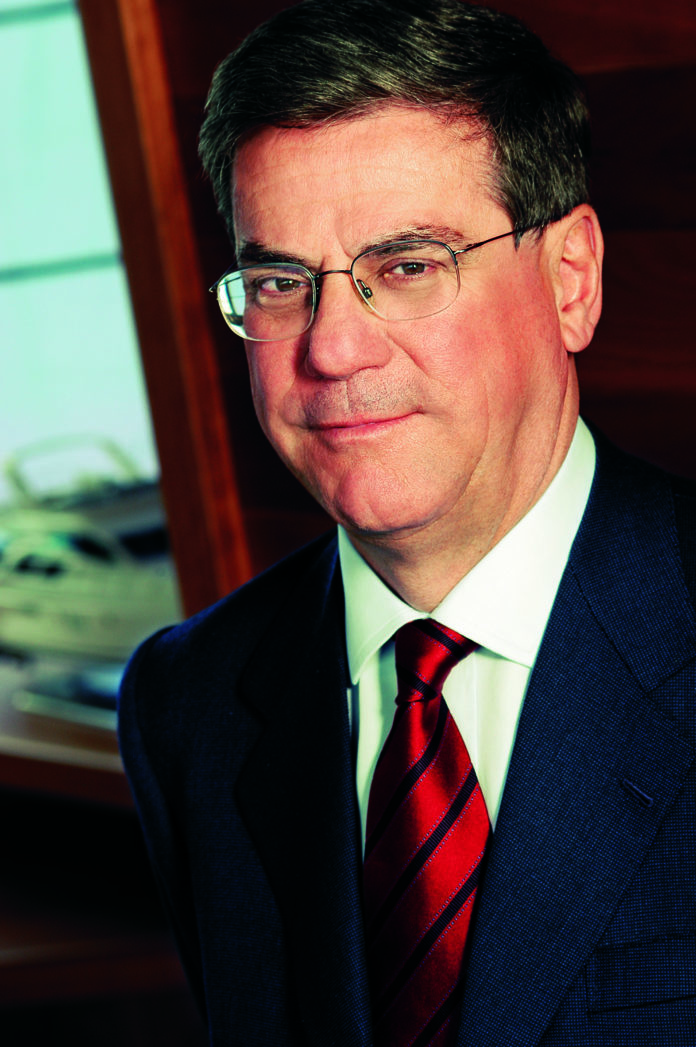 Azimut Yachts is a brand of the Azimut Benetti Group. With its Atlantis, Magellano flybridge, S and Grande collections, it offers the widest range of yachts from 34 to 120 feet. It operates in 70 countries with a network of 138 sales and service centres and has direct representative and service offices in Shanghai, Hong Kong, Fort Lauderdale and Itajai.

The history of Azimut Benetti is the story of a great entrepreneurial adventure. In 1969 Paolo Vitelli, founder of the Group, decided to make a business of his great passion for the sea: with a friend he began chartering sailing boats and created the Azimut company, based in Avigliana in the province of Turin. The following year, during the Genoa Boat Show, the Dutch boatyard Amerglass decided to entrust Azimut with the sales concession for Italy, followed by representation of other important yards such as Powless, Camper&Nicholsons, Aloa and Westerly. With this commercial success, Azimut aimed to extend its activity to building boats and, thanks to a joint venture with Amerglass, came the AZ 43 Bali, one of the largest boats to be mass produced in fibreglass at the time. In 1977 was launch the smallest, low-budget boat: the AZ 32 Targa which was so successful it was called the “Ford T” of yachting. Between 1977 and 1985 the company developed constantly, creating several highly successful models such as the Failaka 105, the first 30 m yacht in history to be built in fibreglass, for a Kuwaiti Prince. Following this prestige achievement, Azimut moved into the American market: in 1982 it took part for the first time in the Miami Show, becoming the American concessionaire for the Allied Marine company of Winthrop Rockfeller.

The birth of the Azimut Benetti Group
In 1985, thanks to the acquisition of the Fratelli Benetti yard in Viareggio, the company began direct production founding the Azimut Benetti Group which, just three years later, caught the attention of the public by winning the Blue Riband, the non-stop Atlantic crossing, thanks to the Azimut Atlantic Challenger, designed by Pininfarina. At the end of the 80s the Italian style had conquered the world: collaboration began with the young designer Stefano Righini, whose revolutionary style gained a following, imposing Azimut design as the standard in the world yachting industry. At the same time construction techniques and innovative solutions were developed that would make history: glued windows, garages for tenders, side windows, huge covered flying bridges and squared bows. In 2001 the Gobbi yard in Piacenza joined the stable, giving life to the Atlantis brand. Specialising in the production of open boats between 10 and 18 m, the brand quickly took on a well-defined identity: grit and sporty elegance. In 2003 the group became a limited company and in autumn 2004 took control of Fraser Yachts, a world ranking company specialising in services for yacht owners. Also at the beginning of the 21st century came another entrepreneurial intuition: to create ports that were not simply moorings but tourist centres. Marinas were created in Varazze, Viareggio and Moscow, Russia, and in Leghorn, currently under completion. In 2007 the Group was awarded by Confindustria the prize of Champion of Growth and Best Performer, for the Italian company with the best average growth rate in the preceding five years. Also, the American magazine Showboats International recognised Azimut Benetti as the leading producer of mega yachts in the world. Well ahead of the others, the company realised the potential of emerging countries and set out to conquer markets in the Far East, Brazil and Turkey. Today the Azimut Benetti Group is an entrepreneurial success recognised all over the world, able to represent Italian style and excellence at its best, and operating through three different structures: two producing yachts and mega yachts and one, Yachtique, offering services. Azimut Benetti is present in Italy in Avigliana, with its headquarters and yard, and in Viareggio, Livorno and Fano, with three yards, services and the Yachtique showroom.

The vision
“To build the finest, most reliable, technological and innovative yacht and to service her always and everywhere,” says Paolo Vitelli; these words sum up the strong points of the Piedmont yard: always being a step ahead, to anticipate the new demands of customers and to be a trendsetter in style. The success of Azimut Benetti is thus the result of coherent and wise company management that is closely tied to the core business. In more than 40 years of activity, Azimut Benetti has always been a private company, a choice that has proved determining both in its growth and in the building up of a relationship of trust between owners and the Group, which is structured to offer customers the yachts that fit their desires. The decision to place customers at the centre of the business model of the group has led to the development of a whole range of services conceived and designed to free owners of all worries. This intuition led to Business Line Yachtique – Elite Yachting Services, which offers solutions to every customer requirement. Innovation plays a fundamental role in the success of the yard: for years the Group has been collaborating with the most prestige Italian and foreign universities and research centres. Thanks to this, in the past 10 years, a series of important inventions have been developed and later adopted by other boatyards all over the world. Among them: the demise of classic round portholes, substituted by windows in the hull just above the waterline; a yacht structured as a loft, with outdoors or separations between the interior and exterior; the optimisation of interior spaces, designed always to provide the sensation of roominess even on smaller yachts; and the use of technologies to serve the environment.

The Magellano series
Again on the subject of innovation, in 2008 Azimut invented a new way of sailing conceiving, with the Magellano series, the “modern trawler” yacht: a vessel with a Dual Mode type hull, able to tackle long and demanding voyages but in any case offering roomy interiors, specially designed, and a unique style. The Magellano range consists of the 43HT, 43 Fly, 53, 76 and the new 66 models. Also available in the Navetta version, with a saloon and dining area that can be separated from the galley and the helm to provide complete privacy, the entire main deck is on a single level with huge windows overlooking the sea and a remarkable quantity of storage space, both interior and exterior.
The latest in the series is the Magellano 66, 20 m overall and 5.4 m in the beam, of which the first model was delivered in summer 2015. It is a versatile vessel that is particularly comfortable even with seas running: the credit for this goes to the hull, which is very different from that of planing vessels, and softens impact on the waves, cutting through them with the vertical bow; at the same time the overall shape and the volume forward reduce pitching acceleration to a minimum and constantly support the bow even when the boat falls into the trough of the wave. In this way the surface of the sea is unlikely to reach the deck and the result is obviously a greater sense of security both for the helmsman and for guests on board.
Magellano is a project that permits long voyages even in unfavourable wind and sea conditions. The interior volumes reflect the external ones: the main deck is on a single level, with a large L-shaped sofa facing an impressive bar area with a 50 inch television and the dining table aligned amidships. Beyond the large sliding door are the helm and the galley. By closing this door, the crew can do its job without entering the spaces dedicated to the owner and his guests and, thanks to the galley door opening onto the sidewalk way, it is possible to reach the crew cabins without crossing the saloon. In the same way, the owner and guests can directly access the night zone from the saloon without passing through the galley end helm. Outside the terrace integrated in the area astern of the flying bridge is evident, a stylish touch that brings the Magellano 66 very close to the world of big yachts. This open space can be enriched with all that is needed to create a perfect environment for relaxation, from comfortable and refined cushions to the stern living area that can be furnished with sofas and chaise longues, to a handy removable canopy that can be installed astern of the hardtop to guarantee shade all over the bridge. The bar offers a further lounge area that is very inviting and protected from indiscreet eyes. On the lower deck, reserved for the sleeping area, is the master suite covering the entire beam, with a great deal of natural light from the huge windows on both sides. There is plenty of cupboard space, elegant chests of drawers, a vanity table and a bunk that hides a complete and well equipped storage space. Also well fitted with cupboards are the VIP cabin and the guest cabin, for space on board is never enough. The fourth cabin is designed as a utility room but, on request, can be fitted out as a cabin with bunk beds. The washing machine and dryer are easily accessible from the cabin corridor. The performance of the Magellano, with two 800 hp Volvo Penta D 13s, is perfectly in line with the modern long-range yacht philosophy. Fully laden at 9 kn it gives a range of more than 900 miles (including a reserve of 10%). The fast cruising speed is 16 to 18 kn, a speed made possible by the dual mode, double chine hull who surfaces optimise performance both in displacement and planing modes.

Future strategies
“In more than 40 years of activity, filled with passion and enthusiasm for our work,” says Vitelli, “we have had extraordinary achievements and collected records and successes that I can only be proud of: we have built more than 10,000 boats, created the most extensive and complete range of yachts in the world; we have reached our clients in every corner of the planet, with a network of concessionary is in 68 different countries and we have met their every need placing our competence at their disposable; we have traced new routes and redefine the confines of marine aesthetics, innovating shapes, materials and surfaces; we got there first in places where yachting was only an unexpressed dream and we have made that dream come true.” In the future of the Group are ambitious programs: consolidating and extending international leadership through new markets, an enlarged fleet, which in the coming three years will add 30 new models, and the creation of customer services that are increasingly customised and up-to-date. In recent years the Azimut Benetti Group has followed with particular attention the consolidation of distribution in the emerging markets, creating, through sales and service offices, a stable and effective presence. Besides China and Brazil, markets today considered particularly promising are central and South America and many countries of Southeast Asia.

Paolo Vitelli, born in 1947, from Turin, graduated in economy and commerce, and had since he was a boy a great passion for sailing. “The sea,” he says, “is more than noisy beaches or holiday houses, it’s a way of developing your freedom.” He was just 20 when he founded Azimut and continues to be involved today as chairman, flanked by his daughter Giovanna. With a degree in law and a member of the Board of Directors of the Azimut Benetti Group since 2000, she worked in the Marine division from 2004 to 2008 as marketing and sales manager.
For Vitelli the aim is to guarantee the continuity of the founding family at the head of Azimut Benetti, as a way of creating added value for the entire Group.