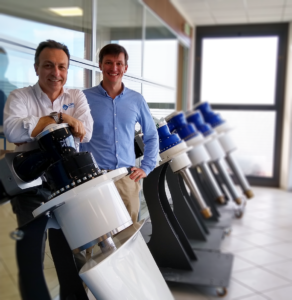 Five important players join the extensive distribution and service network built up by CMC Marine, which recently had the chance to coordinate and update everyone involved during the third Service Convention organised at company head office in Cascina.

Starting with the closest geographically, Yachtalia – based in Massa, Tuscany –  is a solid business and already a service centre for the Northern Tyrrhenian sea (Tuscany and Liguria), with a history specialising in the provision of engineering, organisational and logistics support for construction and refitting projects on yachts of various sizes and types. Soon the company will also be the first official Waveless distributor.

Yacht Service Team, on the other hand, will sell CMC Marine and Waveless systems in Spain, as well as performing servicing and maintenance work. A naval services company, its repair and storage facilities are located at the Barcelona Nautical Centre in Marina Vela and it has offices in Marina Port Vell, where the naval engineering department is situated.

Blue Point Yachting, based in Cyprus and with offices in Lebanon, is the latest service centre to join the CMC Marine family. The Cypriot company operates as official dealer and representative in Cyprus and Lebanon for many important yacht brands, including Azimut Yachts, Sea Ray Boats, Nautors Swan and Elan Sailing Boat, as well as representing Kohler Generators in Cyprus.

The other two companies operate in Asia, a region of growing importance where CMC Marine, after its successful Taiwan roadshow last year and the contract to supply Sabilis Electra to leading Chinese shipyard HeySea, recently closed the sale of a refit project in Hong Kong and is planning a second roadshow in Asia this spring.

Next Wave Yachting, based in Hong Kong, was established in 2012 and also works as a boat designer and a vendor of new and used yachts. It is a very well-known and established company, with offices in Shenzhen, Hainan, Xiamen and Zhuhai.

Marine Service Asia, instead, will handle sales and provide assistance both in Hong Kong and the Philippines through a team of international and local experts with wide-ranging know-how and experience in the marine industry.