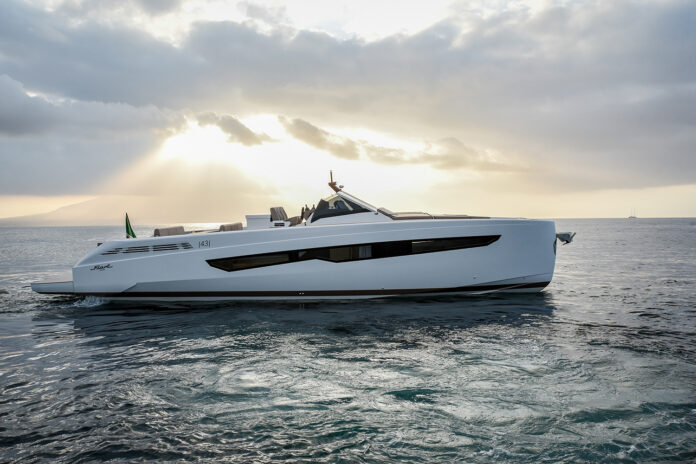 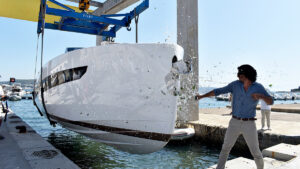 The new Fiart 43 Seawalker touched the water for the first time on 22 August in Baia (Na), inside the historic headquarters where Fiart Mare has produced thousands of boats, in 60 years of activity. At the launch there were managers and technicians of the shipyard but also all the workers who, thanks to their experience and dexterity, have created a boat of great technical and aesthetic value.

With the 43 Seawalker, Fiart Mare revamps the Mediterranean boat concept proposed with the Fiart 33 Seawalker, a model perfectly capable of fulfilling its function in daily use or for fast cruising.

13.84 m long by 3.99 wide, this yacht has a walkaround deck design characterized by a modular layout, and inside it offers two real cabins: forward with double bed, aft with single beds side by side, both served by a large bathroom with separate shower cubicle.

The OMV Yachting Group (which operates on the French Riviera from the Port Grimaud and Saint-Tropez offices ) connected Fiart Mare and the owner, a French client. Its contribution was important to mediate between the customization capabilities of the shipyard and the needs of the customer who choses a cockpit characterized by a lay-out where the set-up includes, in addition to a large sundeck, a sofa and two mobile tables, capable of making spaces more versatile. 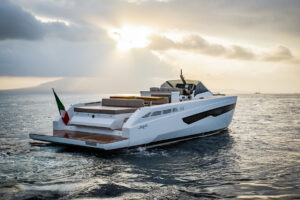 Among the options present on the first Fiart 43 Seawalker there is also the large aft bridge with electro-hydraulic movement which, in addition to facilitating access to the sea, facilitates the launching and hauling of the tender on board.

1960: Fiart Mare rides the wave of technological development, creating for the first time in Europe, a boat with an absolutely innovative material for the time, which has made the nautical sector take an epochal leap: fiberglass.

2020: 60 years later, after over 150 models of pure nautical Made in Italy – entirely designed and built in its own facilities – the Fiart Mare Group confirms its technological leadership, continuing to create motoryachts that represent the best of world production.

Fiart Mare today offers two ranges of boats, Fiart and Cetera, between 33 and 60 feet in length for all-round sea lovers. Boats for those who love to have fun at the helm, for those looking for safety and reliability, for those who appreciate the concept of “home-boat” that Fiart, despite the sportiness of its models, can guarantee, also with a great level of customisation.