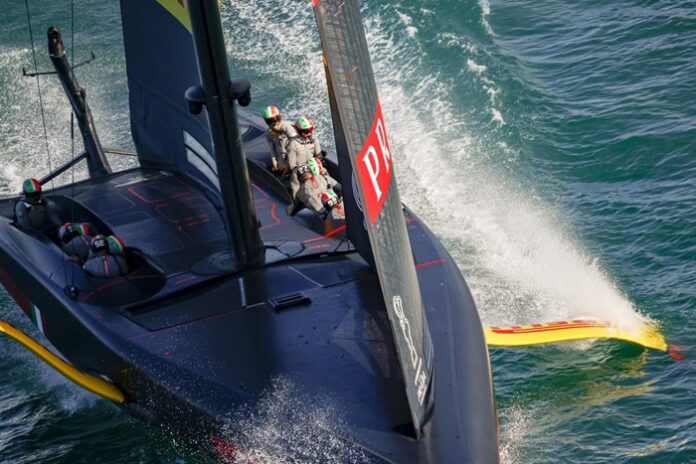 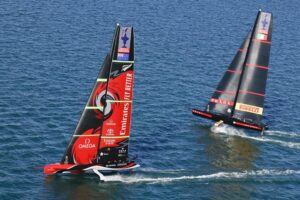 Despite pessimistic forecasts that saw a risk of racing being postponed, it was blowing 9 knots for the start of the third race of the final. And it saw Luna Rossa sailing into history to become the first Italian entry to win two races in the America’s Cup final: back in 1992 Il Moro di Venezia only won one race against America3, who went on to win 4-1. After a good race the Italians on Luna Rossa won by more than half a minute to make it 2-1 in their favour.

Unfortunately for them, a problem during a gybe in the second race of the day put paid to their hopes and New Zealand cruised on to win by more than a minute.

The first race saw no close duelling in the pre-start, but Luna Rossa went for the right hand end of line and, on starboard, could force NZ towards the left hand edge of the course. New Zealand was forced to tack, Luna Rossa immediately followed suit and secured a 15 metre lead, leaving the New Zealanders trapped in disturbed air behind them. In the ensuing tacking duel, LR manoeuvred well and had built a 10s lead by first gate.

The New Zealanders clawed something back on the second downwind (rounding the mark 22 seconds down) but Luna Rossa excelled on the upwind leg to lead by 38 seconds. At the finish line New Zealand crossed 37 seconds behind.

In race four, again with 9 to 10 knots blowing, New Zealand operated well in pre-start, and despite being forced to come down off their foils briefly as they approached the start line too fast, still managed to establish an early advantage, forcing Luna Rossa to head towards the right hand side of the course. A tacking duel followed with New Zealand managing to hold on to a slight lead and round the mark 9 seconds ahead.

Still, it was a close race. But near the end of the downwind leg disaster struck for Luna Rossa. As they started a gybe something went wrong with the foil control system: the starboard foil struggled to get down below the water while the port one couldn’t seem to get out of it.

With both foils dragging in the water the hull of Luna Rossa flopped down with a splash and the race was over. The Italians recovered, but were 34 seconds down at the mark and the New Zealanders were unforgiving, increasing their lead to 48 seconds by the end of the second downwind leg and eventually crossing the finish line 63 seconds ahead.

So it was one step forward and one step back for Luna Rossa, but with the score at 2-2 someone is going to have to win five more races to take home the 2021 America’s Cup!