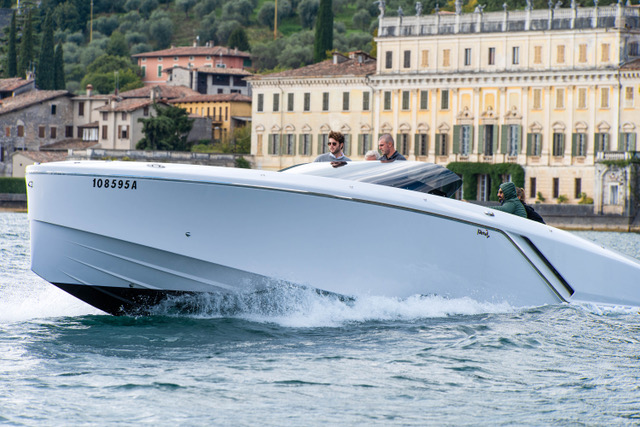 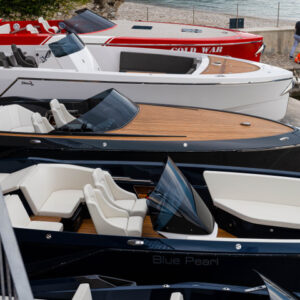 Gargnano sul Garda, the headquarters of the Cantiere Nautico Feltrinelli, the exclusive importer of the Austrian brand, was the setting for the ninth edition of the Autumn Open Doors, an increasingly popular and awaited event that celebrated a rich nautical season that has just ended in style.

On 9 and 10 October, the entire Frauscher fleet was available to the shipyard’s historical customers, as well as to those who wanted to experience the thrill of boarding the refined and fast motorboats for the first time.

In addition to Frauscher’s powerboat production from 2003 to today, two novelties with electric propulsion have been tested for the first time in Italy: TimeSquare 20 and 740 Mirage Air with 110 kW Torqueedo electric motor.

The first is a sophisticated catamaran, launched last spring, with 20 square meters of walkable area for a totally freedom of movement, while second is one of the most successful and loved models of the brand, proposed in a version for protected areas that do not neglects the adrenaline giving a top speed of over 26 knots.

“A party in grand style that wants to be a thanks to the customers, who have followed and supported us, and also to Frauscher who has provided us with a product of absolute excellence, and finally to all the staff of our company, very busy for five months season and finally reached the well-deserved vacation ”, says the smiling landlord, Mauro Feltrinelli.

He adds: “The meaning of the Autumn Open Doors is precisely to celebrate the end of one season and prepare for the beginning of the next one with a positive attitude, which will start with the Düsseldorf boat show in January 2022. At the same time, the event was also an opportunity for our customers, enthusiasts and the press to try out our range and the latest electrical innovations”.