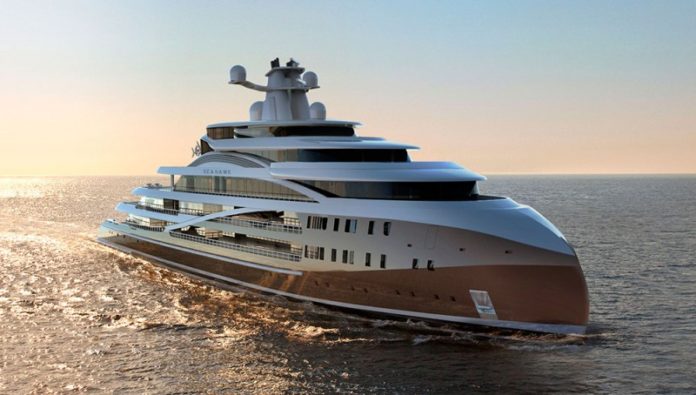 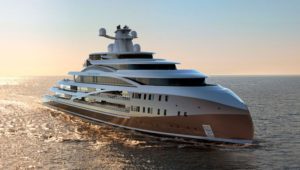 The Project Sea Hawk superyacht concept was presented by the London-based design firm Hawk Yachts in a preview at the Monaco Yacht Show 2015, her construction to begin upon purchase.
The 338-foot yacht concept has been designed as a luxury expedition craft, comfortable both cruising near the polar ices and on the tropical rivers.
The Sea Hawk will feature an efficiently hydrodynamic hull with belted reinforcement, large bilge keels, retractable fin stabilizers, and oversize propellers. An approximately 1.5 decks higher than standard bow elevates the gunwale (top edge), with a shape that helps deflect and dampen the force of large waves: these features, added to the construction materials, make the vessel suitable for open oceans, able to cut through ice up to 2.5 feet thick and thus ready for Polar Ice Class 6 certification.
In opposite climatic and environmental conditions, Sea Hawk will be able to bear the heat thanks to engine-cooling systems, air-conditioning, insect and pollen filters, and heat exchangers capable of handling the high silt content of many tropical rivers. The use of a hybrid propulsion system will allow cruising at speeds of up to 12 knots using only electricity, which makes Project Sea Hawk an eco-friendly superyacht. In addition to this, an onboard incinerator along with sewage and grey-water treatment processes will minimize environmental impact. The exploratory vessel will have a range of 12,000 nautical miles, enough storage for voyages lasting more than three months, and a helipad for any necessary ship-to-shore sojourns.
Its large and fully customizable interiors could accommodate 36 guests and 62 crew while featuring a spa, an indoor pool, an open galley, and an ample bar and lounge surrounded by windows, all the comforts expected on such a luxurious superyacht.