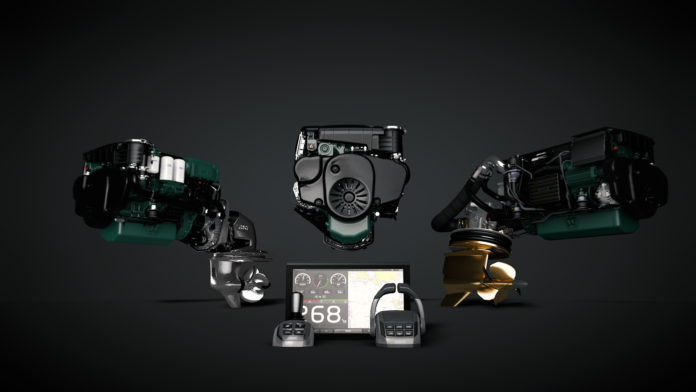 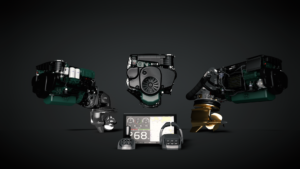 With over 100,000 units delivered since its introduction in 2003, Volvo Penta has given its next generation D4 & D6 propulsion packages a comprehensive overhaul. They are available in three different variants: Volvo Penta IPS, Inboard and Aquamatic sterndrive.

From the outside the changes might not be that obvious, but almost every aspect of the fully integrated system has been upgraded, from helm-to-prop.

The enhancements include re-engineering of the engines, delivering more power and torque and ensuring the highest levels of reliability. They are perfectly matched with an upgraded IPS pod and the new DPI Aquamatic sterndrive, which bring increased comfort and maneuverability, as well as more straightforward servicing and maintenance.

The D4/D6 is the company’s most technically advanced package. Designed exclusively for marine applications, the 3.7 liter D4 and 5.5 liter D6 deliver Volvo Penta’s unique marine torque, ensuring maximum power is transferred to the propellers and into the water, across the whole speed range. The changes are more than a facelift, with the majority of components reengineered. The D4 and D6 deliver performance outputs of between 150 to 480 hp. In top specification the D4 now has a maximum output of 320 hp, while the D6 in top spec boasts 480 hp. Not only 10% more power across the range, these engines are more fuel efficient – between 0.5% to 7.0% (in E5 cycle).

The list of upgrades is long, including a new engine management system, new fuel injection system, new turbo charger and a new supercharger. The cylinder head, pistons and valves are new, to cope with the increased performance, and the crankshaft is also now stronger to handle the bigger loads.

These engines will also cost less to maintain, with longer service intervals and fewer service items. All this adds up to annual savings in fuel, parts and servicing.

While the IPS driveline has had improvements in durability and reliability, it is the DPI drive that comes in for the biggest changes. The new hydraulic clutch ensures a silent and smooth shifting, as well as slipping at low engine speeds, resulting in added maneuverability and higher comfort at low boat speeds. The hydraulic clutch, together with steer-by-wire – which is now standard for DPI – gives an improved joystick docking function. The DPI driveline now also comes with Dynamic Positioning System, which automatically maintains a boat’s heading and position, even during strong currents or windy conditions – ideal when preparing for docking. The Inboard version is also available for shaft and water-jet transmissions.

One important aspect of this wide-ranging series of improvements to the D4/D6 marine systems is a new generation of Volvo Penta’s Electronic Vessel Control – EVC2. The first major upgrade since the system was launched in 2003, the EVC2 connects and manages the internal communications between the engine and levers and display screens, etc. With an all-new operating system, the EVC2 is now more independent of the engine than before and will act as the primary enabler for the future of boat building, including remote diagnostics and connectivity.

Now using a modern electrical architecture, the EVC2 is able to connect more things into the ecosystem of the boat, giving boat users greater functionality and offering builders more flexibility in the boat design process. This includes one connection point – for software downloads and diagnostics, and an On-Board Service Assistant feature gives real time maintenance information. The control levers and joystick also get a more modern satin grey makeover.

While the EVC2.0 gives substantial benefits immediately, the future possibilities it offers are just as exciting. It will form the foundation for connecting all future features in a boat and allow new services to be uploaded anywhere in the world – when automated connected and electric features become available.