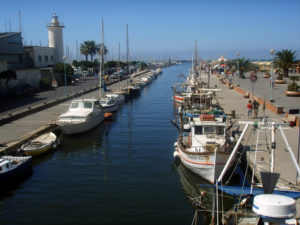 Today, fortunately, everybody faces up to the issue of plastic. With greater or lesser practical success, but certainly all with a desire to learn and some with originality and pragmatism. Isolem is part of this last category: few dreams and concrete action.

The initiative is also promoted by the municipality of Viareggio, by the Tuscan regional ports authority and by the Viareggio harbourmaster, by several yachting companies and by public and private research institutes in the region. The fishing boats of Viareggio can be transformed into a resource to combat the problem of plastic refuse at sea. From this came the idea of the ISOLEM (ecological marine island) project.

The project leader is SEA AMBIENTE spa in Viareggio and the partners are CIBM of Leghorn for research, the Cittadella della Pesca and NAVIGO. ISOLEM has the support of the Tuscan Region which will finance it through the community instrument FEAMP, a further demonstration of the importance of this issue for the Region. The Tuscan model has also become one of the guidelines of the European Union directive on port collection facilities for marine refuse.

The main aim of the project is to implement action and feasibility studies to protect and recreate the biodiversity of marine ecosystems through sustainable fishing, by recovering marine areas damaged by human refuse on the sea bottom. The specific objectives of the project are:

Refuse in the sea consists generally of products or solid materials that are thrown away, eliminated or abandoned in marine and coastal environments. In addition to fouling habitats, it can interfere directly with the life-cycle of several marine species (for example the plastic bags that cause death when swallowed by whales or turtles, the “ghost” nets abandoned on the bottom that keep fishing years after being abandoned), and have indirect effects also on man (for example toxic substances released by certain refuse can enter the food chain and create bioaccumulation phenomena). This kind of refuse comes from very varied sources and can include material thrown into the sea from boats, refuse coming from coastal community activities, industrial refuse or refuse thrown into rivers that then arrives into the sea. It’s been estimated that about 80% of the refuse on the sea bottom comes from activities or illegal tips on land. While much action has already been taken to prevent plastic and/or persistent refuse being thrown into the sea from vessels, little seems to have been done to prevent refuse originating on land from ending up in the sea. The Global Protection Action (GPA), drawn up during the 1995 Washington Conference, set itself the following objectives:
(a) to establish an effective system for controlling, receiving and gathering refuse from communities in coastal areas;
(b) to reduce considerably the amount of refuse reaching the sea and coastal environments by preventing and reducing the production of solid refuse and handling it better (collection, transformation and recycling).

To do this, the following measures and actions were proposed:
(a) the introduction of appropriate measures (national rules, economic instruments and voluntary agreements) to lessen the production of solid refuse and encourage its collection and recycling;
(b) the installation of containers for collecting and recycling urban refuse in public areas;
(c) the creation of areas for depositing and recycling refuse collected or produced in port;
(d) the development of greater environmental awareness through public awareness campaigns aimed at citizens, local government institutions, industries, fisherman and their trade associations etc;
(e) the institution of programs for handling refuse produced by communities on watercourses and in coastal areas;
(f) the institution of campaigns or permanent services for collecting refuse in coastal areas and on the sea bottom.

On the basis of these guidelines, in Italy the regulations governing the collection of refuse produced and collected by fishing boats (Law 29 September 1980, number 662), generally ignored because hard to apply and control, was integrated by Legal Decree number 182 of June 24, 2003 to implement directive2000/59/CE on “port systems for the collection of refuse produced by ships and residues of cargo”. This laid down that all ports, within two years of the decree, must be equipped with port plant and services to collect the refuse produced by ships and residues of cargo; the creation of these collection systems, the treatment and disposal of the refuse is financed by the vessel is present in each port with the application of differentiated tariffs on the principle of “pay as you throw” and handled, where present, by the port authorities. For fishing boats reduced tariffs have been adopted; in the case of refuse collected during fishing, they are not obliged to pay any tariff.

In practice, vessels used for trawling can collect, in addition to the catch, a considerable quantity of refuse of all kinds; currently, with prevailing regulations, since it is difficult to bring it on board and there are no structures for receiving it with the costs of disposal currently being paid by the vessel, all the refuse “caught” is thrown back in the sea when the catch is sorted.
Initiatives similar to that of the current project, with excellent results, have already been carried out in some Adriatic regions, while in Tuscany an experimental “Clean Archipelago” project was started in March 2018 between the provinces of Leghorn and Grosseto. It lasted six months. In Viareggio is one of the largest and most important trawling fleets in the region, so it represents an ideal base for perfecting a management model for collecting refuse coming from the sea. Viareggio is also an example of solid relationships of collaboration among the various entities that must necessarily be involved in a project of this kind: first of all the fishermen and their associations, public administration (municipality of Viareggio), the bodies that control and manage the port and maritime activities (harbour master in port authorities), and companies that work in collecting and recycling refuse (SEA Ambiente).