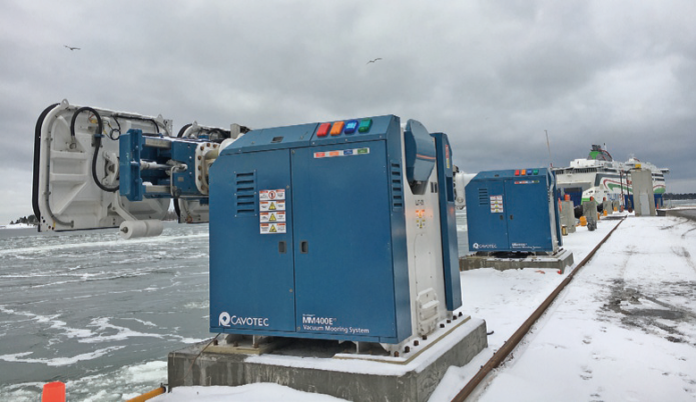 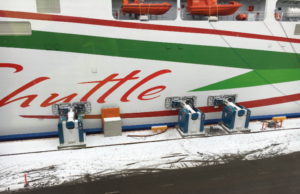 It all started in Nova Milanese in 1963 with the italian company Specimas, founded by Vittorio Baldoni, which produced automated cable reels and other products for mining. In 1972 three Swedish boys – Lars Hellman, Peter Brandel and Stefan Widegren – who had come to Italy to do an internship at Specimas, became representatives for Sweden and managed to win a very interesting contract with Atlas Copco, which allowed them to become the largest Swedish distributor of this type of products. They did so well that in 1984 they took over Baldoni’s company, changing its name to Cavotec.

Today Cavotec is a leading group in engineering solutions that designs and produces automated connection and electrification systems for ports, airports, mining and energy industries as well as industrial applications all over the world, where its innovative technologies guarantee safe, efficient and sustainable operations. The history of this company is studded with cutting-edge inventions for technology and winning intuitions, always with a special attention to the environment, through the development of innovative technologies that they make available to their customers. In fact, many of the group’s systems promote the use of ships, cars, cranes and other electric vehicles that reduce or eliminate emissions.

One of Cavotec‘s flagship products is the MoorMaster automatic mooring. The system reduces the need for mooring ropes thanks to automatic suction cups that allow boats to dock and restart in just a few seconds. This technology greatly improves safety and operational efficiency, optimizes the ship-to-shore interface and in many cases allows ports to save on infrastructure costs.

Muhammad Umar Farooq, a mechanical engineer born in Pakistan and graduated from the Politecnico di Milano, is the technical manager of the MoorMaster System project and works in the new headquarters in Nova Milanese, opened in May 2018. He explains the history of Moormaster: “The idea was born in the early 90s in New Zealand. The first intention was to replace the ropes with a mechanical arm mounted on the ship, which anchored to the structure of the port coming out of the ship thus keeping the boat steady. After the first units were built in the ‘civil’ field, at the beginning of the 2000s MoorMaster and Cavotec joined their experience for the construction of the first large-scale automatic mooring. In 2005 the first contract with the port of Salalah in Oman was signed, where thanks to MoorMaster one of the largest container ships in the world is moored, an imposing 400 meters long cargo from MSC and MAERSK with a loading capacity up to 19.462 TEU“.

After this first experience, other projects followed around the world in countries like Canada, Australia, Oman, Lebanon, South Africa, Denmark, England, Norway, Finland, etc. Today this innovative technology is widely accepted around the world and in 2018 the MoorMaster systems have completed more than 450,000 automated dockings for many types of boats, with a safety ratio of 99.99%.

Farooq again explains: “The MoorMaster engineering is completely carried out in New Zealand, then the designs are sent here to the Nova Milanese plant where we take care of the production of the machines and the product testing phase. All MoorMaster systems are completely built in this brand new plant, with materials and technologies for sustainable building. It has the capacity to generate 230kW of solar energy and is equipped with geothermal heating, includes 2,730 square meters of offices and 12,264 square meters dedicated to production”.

The company continues to develop new solutions, to further improve security, operational efficiency and productivity. As Farooq explains: “One of the latest developments on which we are focused is the integration of MoorMaster with the automatic plug-in system (APS) that recharges the batteries of electric boats, without the need for human intervention, ensuring an optimal recharge in short times. We are also studying, in partnership with Wartsila – a Finnish company specializing in the manufacture of propulsion and power generation systems for marine use and power plants – a solution to combine MoorMaster with a 2MW induction charging system for electric propulsion vessels.”

It is a system covered by numerous patents worldwide and today it’s the only system capable of anchoring ships to the quay using a technology that exploits the vacuum created by the machine to hook a mechanical arm to the bulkhead of the ship with a giant suction cup , while the oleo dynamic heart of the system allows the arm to accommodate the ship’s true movements. The suction cup works by creating and perfectly maintaining the vacuum even if the gasket has been positioned on a riveting present on the bulkhead, or on bolts or even on a rope that should be on the spot where the suction cup hooks the ship. These large MoorMaster suction cups that hook the ship are positioned at a distance of about 5 meters from each other along the entire side of the boat: once hooked with this system, the ship can only move vertically following the natural movement of the waves, but remains completely still with respect to the horizontal axis, it does not move with respect to the docking point on the quay. Ships moored with ropes move horizontally, even up to three meters in rough sea conditions, lengthening working times and reducing safety.

Each docking unit is composed of a significant number of parts. One of the most important components is the vacuum creation system: in a MoorMaster machine with two suction cups, the vacuum pump with accumulator includes 5 IMI Buschjost stainless steel IP67 1 inch valves, some open some closed.

MoorMaster is a useful system, if not indispensable, especially in those ports exposed to the open sea, where the wave movement is considerable and it is very difficult to keep the boats still moored with traditional systems. Less necessary is the use of MoorMaster in closed ports, as are the Italian ports, but a great advantage of these systems is the increase in productivity that is obtained thanks to MoorMaster: to anchor a ship in port with the classic method of ropes requires the intervention of personnel on board the ship and at the dock and it takes between 30 to 60 minutes to complete the maneuvers necessary for docking. With Cavotec systems the ship is automatically docked in port in a maximum time of 30 seconds.

There are many advantages guaranteed by Cavotec’s MoorMaster system, from improved productivity to reduced environmental impact; from better flexibility and security to reduced infrastructure investments. The mooring can be carried out from any place, thus reducing the dependence on the staff present at the mooring, which results in a reduced risk of accidents since the personnel is no longer present in the dangerous work areas. This system also allows a reduction of more than 90% of emissions during the docking of ships due to the reduction in the use of tugs and the ship’s engine.

“For two years Cavotec has increased its resources for projects dedicated to civil ships and ferries for people transport, which are in great demand in northern countries such as Finland and Norway,” concludes Farooq. “The MoorMaster system is currently sold in Norway, a nation at the forefront in adapting to the 2030 environmental objectives of the Paris agreement, where it is also used for induction charging of even very large ferry batteries – in Finland, for example, the MoorMaster system operates with a recharge function on a 180-meter long ferry with a load capacity of more than 200 cars. The systems for charging the batteries of ships and ferries require that the ship is well stopped at the dock.”