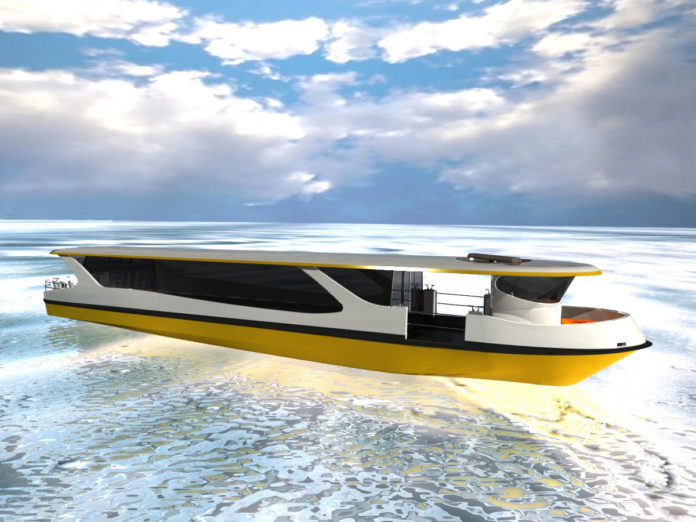 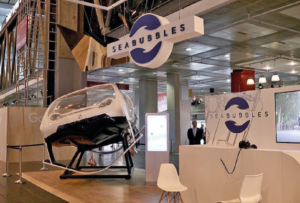 Passenger transport in inland waters is a topic that is not widely treated except in a restricted area. Strange, if we consider the importance and great extent of inland waters in Europe and the chronic road congestion. However, it seems that now something is changing thanks to a greater sensitivity towards the environment and to the interest that passenger water transport also arouses in large cities choked by traffic. Will the future of public and private transport be on the water? In the meantime, the interest and the proposals are multiplying.

An interesting example is SeaBubble, the water taxi born in Paris in 2016 from an idea by Alain Thébault – designer of the trimaran Hydroptere- and Anders Bringdal, four-time world champion in windsurfing. SeaBubbles was originally designed to be a water taxi on the Seine in Paris. Alain Thébault wanted a silent and non-polluting means to move people over water instead of by road to lighten Parisian traffic and pollution. With the support of aeronautical technicians, the first prototype was designed that already used foils to stand on water and composite materials for lightness and strength.

The prototype, made with support from Décision SA (Switzerland), part of the Carboman group, a specialist in the development and prototyping of complex composite structures, and Sicomin (France), a producer of high-performance epoxy resins, was tested on the Seine in 2017. Sicomin has supplied Sicomin’s GreenPoxy® InfuGreen810 advanced resin system, which is 30% vegetable-based. It also supplied a range of complementary infusion materials, such as multi-axial fiberglass fabrics, PVC foams, release agents and epoxy spray adhesives to securely position dry fabrics in molds.

The high tech “bubble” also boasts sensors to measure water conditions and therefore make automatic adjustments, all this brings the costs up: 200,000 euros are a large figure but the bubble will save a lot on consumption compared to a standard combustion engine. According to its creators, while a normal boat costs between 50 and 100 euros an hour in fuel, SeaBubbles, which is electric, only a couple of dollars. The first SeaBubbles should soon be delivered to Paris, the United States and China. The goal is to have 5,000 bubbles in around 50 cities by 2024. Major developments are announced, such as the boat without a driver and “Flybus” for 42 passengers. According to Alain Thébault “The future is in public transport and clean on water”

In Italy, a careful study in the field of the modalities and organization of small-scale public transport (mainly taxi, shuttle and touristic service on lakes and waterways) has led to specific configurations for the hulls, to customized solutions for the electric propulsion system and to an original organization of the deck superstructures. Research and production of new public transport boats of small or medium size are increasing, with a high degree of innovation both in terms of the structural part and the propulsion system, and in terms of deck articulation.

A water bus for Venice 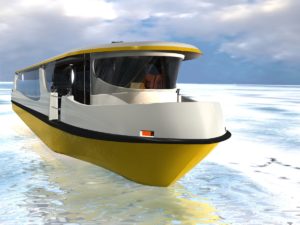 Let’s now talk about EcowaterBus, the new “vaporetto” for the City of Venice by Studio Di Bartolomei. Fabio Di Bartolomei is an eclectic designer who deals with both industrial & interior design, architecture and yacht design. Some of his projects, have been selected and exhibited in museums including the MOMA of New York.

As Fabio affirms: “The whole project is based on an essential concept, i.e. the creation of a designer is not a work of art, but a work that must be produced and used. It is necessary to say that there is certainly an important artistic side in what we do, but the substantial difference between an artist and a designer is that the latter must be more concerned about the effects that his project has on the society precisely for the reason that the fruit of his genius will be used in real life. This is the beauty of design, to think that a shape we have studied and created can also positively change people’s way of life. This is the spirit with which we worked on EcowaterBus project for the new Vaporetto for the City of Venice“.

Designing a boat that will have to navigate within an extraordinary, delicate and complex city like Venice is very difficult because the project must integrate both with centuries of history and traditions and also cope with the many restrictions that regulate Venetian navigation. Studio Di Bartolomei began by analyzing the state of the art, that is the “vaporetti” in use.

State of the art

The boats have an unmistakable single bridge shape, open to the bow, a steel hull, first studded, then welded, a little over twenty meters long, four wide, with less than a meter and a half of draft and protected on the outside by a continuous fender. These dimensions are the result of a compromise between the need to increase passenger space and their containment due to the difficulty of maneuvering and the size of the Canal Grande. The older boats sported a raised bridge to allow the engine rooms containing the steam boilers to be placed below.

Over the years small changes have been made, more than anything else of aesthetic value: the vertical bow has tilted outwards, only to re-enter the upper part, the cockpit from central and elevated has been lowered and moved gradually towards bow and, in the last experimental vaporetti, occupied only the bow, clearing the central part.

From this deep analysis, has developed the design of EcowaterBus: the slender bow, with fluid and dynamic lines, has however maintained the traditional glass configuration for the wheelhouse area. The steel and glass structure of the side has large transparent surfaces to open the interior of the “vaporetto” towards the city. The space that is created is large and livable, as in the old boats of the beginning of last century. The hull design is optimized in order not to cause too much wave, that is one of the major causes of Venice deterioration.

Aft is the closed passenger cabin. A glass door with automatic opening allows to separate this air-conditioned area from the more crowded and busy area of the central part. The cockpit is placed forward to allow better visibility and free the central part to enbark and disembarking passengers and to facilitate access for the disabled and people with reduced or impeded mobility.

The interiors are also revolutionary: LED lighting system, retractable air conditioning system in the false ceiling, ergonomic seats and coverings the technological panels in stratified Teak wood, a material with the properties of a laminate without altering the aesthetic characteristics of the wood. The anti-slip floors are appropriately designed so that any water brought inside is eliminated laterally.

The maximum navigation autonomy and reduced consumption are also achieved through weight reduction, for this reason composite materials have been selected for construction. The vacuum infusion process, has been selected because it allows to have an exact evaluation of the quantity and distribution of the material used during the infusion, and to obtain finished surfaces directly during the molding phase, reducing the finishing operations.

The severe restrictions in terms of speed and noise that regulate Venetian navigation have advised against the use of particularly powerful engines, however, thanks to the hybrid engine, the boat is able, if necessary, to move quickly in the lagoon part that surrounds the city, even to reach the numerous islands.

The hull is made of GFRP (Glass Fiber Reinforced Plastic), with epoxy resin. The process takes place on specially constructed molds using disposable shapes produced by numerical control processing derived from the 3D project provided by the Di Bartolomei studio. The mold was previously treated with release agents. The inside of the hull was made by rigid polyurethane elements except for some parts of the engine compartment where it was preferred to use the most suitable wood for the specific use of supporting and fixing the engines and other parts connected to them. The whole structure was then coated with resin.

The external finish is in gel coat, which is applied in the mold as the first phase of the layering process. This finish is used to create a smooth, compact surface layer without porosity protecting the boat from atmospheric agents and ultraviolet rays, creating a barrier against water absorption, which could occur due to capillarity from the fibers on the surface and reduces the deterioration caused by saponification and aquatic microorganisms and algae.

The considerable dimensions of EcowaterBus (24.50 m. length, 4.40 m. beam), and the characteristic of being single-bridge (without differences in height between the different areas) allow the easy transport of more than 100 seated people, in addition to the special equipped areas that are reserved for the reception of 2 wheelchairs and 6 people with reduced mobility.

The boat is equipped with 2 engines of 8,700 cc of displacement that provide the transmission of the motion each to a shaft and then through an inverter of the “V-Drive” type to the axis line equipped at the end of a propeller with four shovels, autonomy is guaranteed by two tanks of 1,000 liters each. It is designed for the installation of electric engines as well to make it a hybrid boat.

To allow safer navigation and to facilitate the numerous maneuvers to which this kind of boat is subjected, the EcowaterBus it is equipped with a retractable radar, a rear-view camera, a maneuvering propeller, a a GPS for satellite control. The first two units have recently been launched and in service.