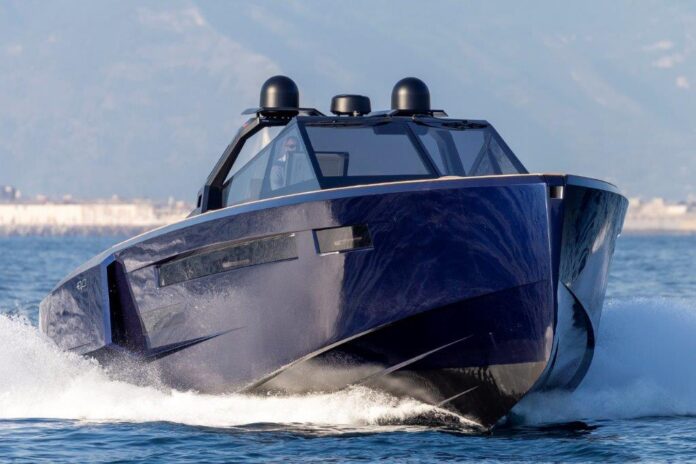 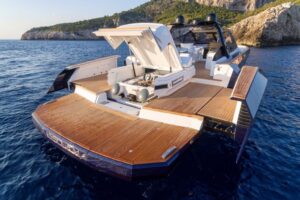 Backed up by the excellent response to the exclusive preview organized for a few selected owners, who were invited early in September to discover the new model against the gorgeous backdrop of Porto Mirabello, Evo Yachts is now ready to present the Evo R6 Open to the public at large.

“Despite the difficult times we are living through, we remain confident and continue to invest in production,” said shipyard owners the Mercuri brothers, “so much so that we have already moved into the construction phase for the Velar 78, of which a scale model will be show at the stand.

We would like our attendance of the Genoa event to be a sign of encouragement for both visitors and the entire yachting industry, and the official presentation of the new Evo R6 Open should be seen in the same positive light: despite the hard times, we are here and we are continuing to invest in the future“.

Signed by designer Valerio Rivellini, the new 18-meter motor yacht is the open version of Evo R6, the successful R_Line flagship launched last year at Cannes, from which it inherits the elegant design and flexible spaces. In Genoa, for the first time, visitors will be able to admire both the TTop and the new Open versions of the R6, side by side.

Compared with the classic version, the new R6 Open features a steel roll-bar in place of the t-top, consisting of a suspended wing that connects the two uprights. The resulting design has sporty, flowing lines that perfectly convey a feeling of lightness. And this focus on lightness is also clear to see in the details, like the decision not to place the antennas on the wing itself, but in a raised position above it, so that they become an integral part of the structural design. 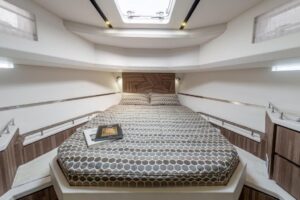 A retractable bimini provides shade for the pilot seat and the forward section of the cockpit, which is fitted out with a big dining area and illuminated at night by courtesy lights on the roll-bar, in an evocative play of light. This outdoor area is joined by three more: from the spacious forward sunbathing area with facing bow seating, to the sunpad island in the beach lounge, and finally the modular swim platform in the stern, with its multiple uses.

Like all the models in the Evo Yachts range, the beach lounge area is the stand out feature on the boat, not least because of the yard’s signature “XTension” bulwarks system, which opens out sideways in a matter of seconds to increase the available space by 40%. The central sunpad is spacious enough to house a 2.85-meter tender beneath it.

The layout of Evo R6 Open is an invitation to socialise and relax in an immersive experience, at one with the natural environment. Despite being a pure open, the below deck area offers every comfort and plenty of headroom, with a layout that features a dinette, the owner’s cabin, two doubles for guests in the stern, and two bathrooms.