Home News The inaccessibility of yachting 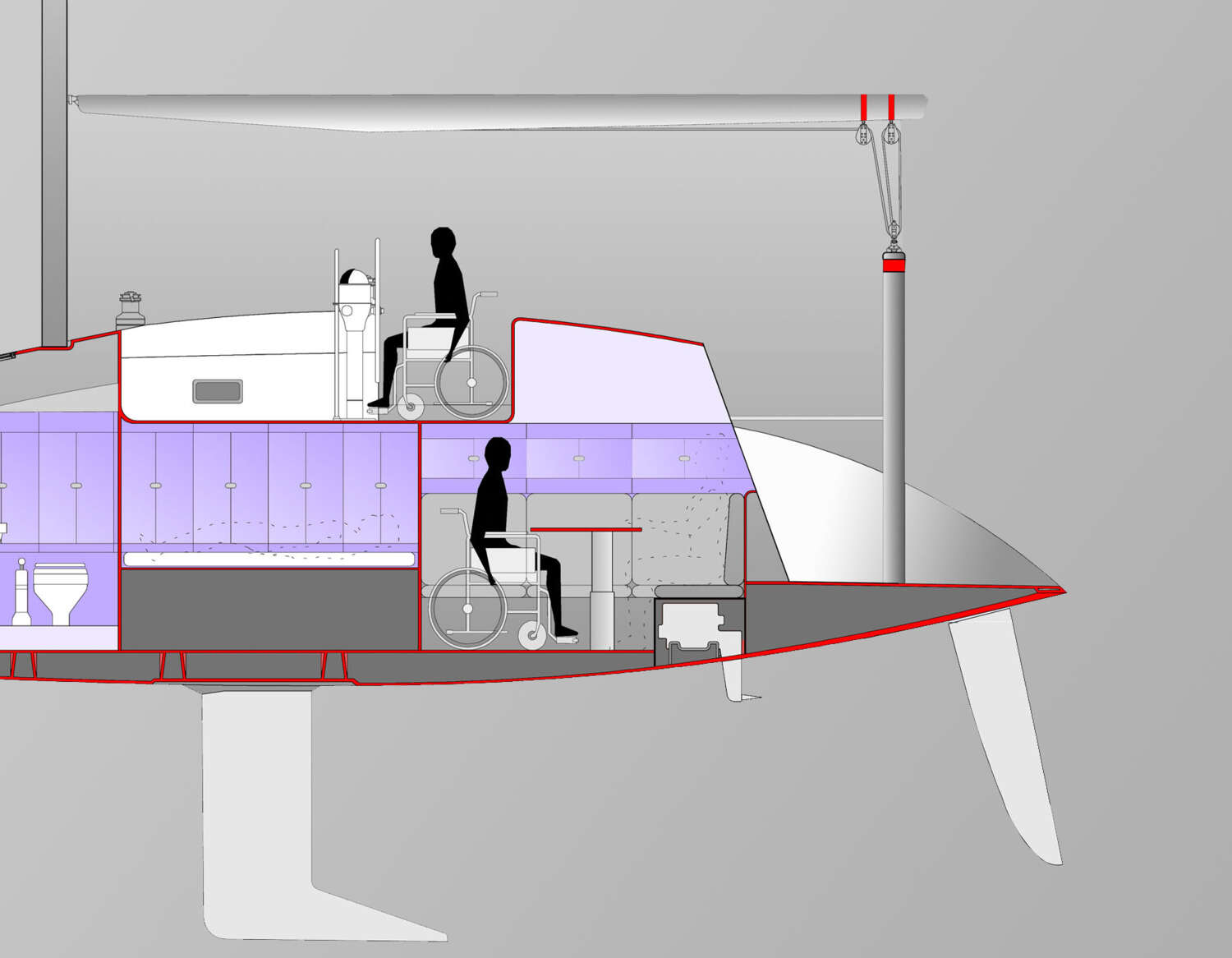 The design of yachts has been limited, to date, to the development of sailing yachts that are almost identical, independently of their length and in practice inaccessible both above and below decks. We take a close look at the problems present on the decks of boats from 10 to 24 m

All yachts currently in production are not subject to any obligations on accessibility, nor to their usability by disabled people, though this does apply with the ADA (Americans with Disabilities Act) to the American fleet.

This translates into layout designs that make the maximum use of space, for obvious commercial reasons, and several steps both above and below decks because of the intersection between space on deck and the lower environments.

It is useful to state that the following analysis will concentrate only on single-hull boats, as they are more complex in terms of the architectural distribution and the available walkable surface. Should also be said that the drawings will be used as simple reference diagrams for analysing spatial distribution, not considering the scale of each diagram.

Morphological analysis of the deck plans of yachts between 10-24m
As regards the morphological analysis of the yacht deck plans, we wanted to make a comparison considering different lengths, although they all present really minimal type variations though there are more than 13 m of difference between the former and the latter. In fact, the impression you have in looking at them is that – even with projects developed by different designers – there is little spirit of innovation either in the form or the ergonomics of non-technical elements.

While this could be understandable on an economic 10 m boat, we certainly cannot say the same for one more than double the length which – with its 23.16 m – could offer much more modern solutions adequate for an enlarged usership, without calling into question either the technical aspect or the layout of elements for handling the boat that must necessarily follow a precise geometry (without which it would certainly be impossible to handle the vessel safely). So we will limit ourselves to purely morphological and functional aspects.

The projects proposed referred to “typical” yachts, mass produced in the past decade. In almost all of them, the trend is to maintain the style of traditional design: apart from the presence of open transoms, no model among those proposed has a flush deck, one that is completely flat and without encumbering deck houses or other bulky superstructures.

On the contrary, all the yachts have deck houses with windshields on a different level from the deck, steps between the cockpit and the walkways and, in some cases, lines and manoeuvres that are not hidden (though this could be considered a purely technical aspect).

In the case of the 10 m boat, the helm abstracts the passage along the longitudinally axis and, when in larger boats there is a twin helm, facilitating moving around the cockpit, other elements such as fixed tables or instrument towers are inserted.

Where the passage is free from obstacles, the distance between the two benches in the guest cockpit narrows in correspondence with the hatch, making access the people in wheelchairs impossible. In general, access to environments below deck is absolutely impossible because of the small size of the hatch.

In short, the presence of architectural barriers on board is truly massive and this says a lot about how the requirements of weaker sectors are completely ignored by designers.

The lack of an ergonomic study

None of the solutions illustrated, moreover, offers the possibility of accessing the side walkways because of the various steps in the cockpit; even if this were possible, the walkways are narrow enough to cause difficulty even for normal individuals.

In conclusion, apart from the layout of the largest yacht (23.16m) – which with small modifications could allow total accessibility everywhere – in none of the other deck layouts some kind of facilitation for people with difficulty moving has been minimally considered. Without going as far as the extreme case of people in wheelchairs, even people with imperfect capacity for movement (for example old people or considerably overweight people) would have difficulty using deck layouts conceived in this way.

The same is true for the many sharp corners around the deckhouse, which is generally very uncomfortable and ergonomically unsatisfactory.

Safety on board for everybody

Accessibility and safety are two parameters that should guide the hand of the designer in the creative phase: the safety of disabled people should be considered for every one of the functions and spaces of a sailing yacht.

It is thus necessary to reconsider the very structure of the boat, providing it with safety systems that are particularly important in a space that continually oscillates on the three Cartesian axes, for the benefit not only of people with motor difficulties but also of normal people.

Although in recent years many changes have been made to modern boats compared with those of the past, there is still a lot to do to make these boats accessible under the principles of Design for All.

By adopting fully, or even in part, the solutions proposed in the research it is possible to create a new kind of sailing boat, to allow anyone not just to navigate in autonomy and safety, but also to create new opportunities for business such as charters for enlarged userships, inclusive sailing schools and in the development of further solutions increasingly useful to make yachts truly “for everybody”.