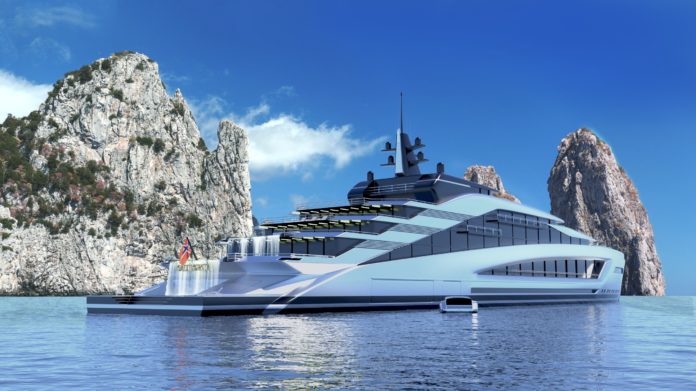 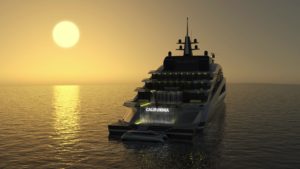 This luxurious super yacht California was designed by Kurt Strand, a Norwegian designer that in 2002 founded his own brand Strand Craft. Over the last years it has become famous for it’s outrageous daring yacht concepts, as this last vessel design proves.

The California mega yacht has large glass walls and balconies, folding glass doors and retractable sections that create flowing living spaces between the indoors and outdoors. The inspiration for the bow were gladiators helmets, as the cut-out glass sections can be considered the eyes.

Between the luxurios features we can find a club style lounge area with bar, night club, game rooms and a gym with a Turkish bath, massage studio and wellness spa. But most of all, the lower desl features three pools, one of which is fitted with a surf riding machine for California-style waves. The California is so luxurious – not only for the estimated price of £350 million – that has also its own waterfall, as you can see in the main pictures.

This 8.000 tonnes yacht has a hybrid electric propulsion system, powered by high efficient diesel turbine generators. The power comes from a 60-tonne lithium-ion battery bank, capable of holding two million watts of electricity. For this reason the M/Y CALIFORNIA would be able to run for 5 hours at a reduced cruising speed of 11 knots.

Moreover, while the yacht is docked, the automatic solar panel system will reduce the draw on the facilities, and all motorised water toys and tenders can be recharged electrically.